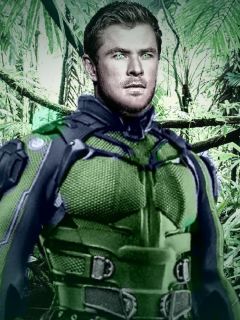 He has the ability to absorb energy and radiation . He can shoot this back out of his body for defensive purposes. When he's fought the Machine he was able to absorb some of this power . He's able to stop bullets or arrows read in their tracks by absorbing their kinetic energy as well .

He can heal wounds within mere milliseconds. For his regenerative abilities he can heal major wounds and small limbs . Now remember he is not a immortal . He just is a powerful being . He's survived being impaled by a meteorite punch and being set aflame by Fire Damon. Fire is one of his greatest weaknesses

He has a minor form of Time Control . He is able to slow down time to make the speed of sound move at 15 MPH. So look at it this way . The speed of sound moves at approximately 761 MPH. So Divide 761 by 15 and it shows that it is 50 times slower than normal so time is slowed 98%

Like a chameleon he can change his body color to match his surroundings . It especially works on the colors green and brown . I guess you can also call this a form of Umbrakinesis

He's taken a blast that was powerful enough to destroy a Galaxy . That blast was from Fire Damon . So include his weakness to fire and that puts him in nigh-invunerable level of Durability. That puts him up there with superman and the hulk

His body can affect for about 10 feet . Strecthing harm's him greatly though so he tends not to do it. It stretched his body !muscles and bones will take longer to heal

From being a Damon his Stamina increased greatly . He can fight for weeks with out tire . He's fought Star Storms in a stalemate that lasted almost a month . Include that both of them are higher than galactic that makes them extremely high in stamina

He can make a force field to block a blow . If the strike is more powerful than a Brian Jenkins meteorite it will surely shatter the field.For example . Brian's meteorite punch is equal to approximately 156000 Newtons/Joules or 35000 Pounds of Force . So that means a nuke can easily destroy it as his shield can only take 3.72848948374761e-11 Megatons when a nuke is around 50 Megatons and that means a nuke is more powerful than Brians meteorite

From him being a Damon he is immortal . His only weakness Hellion Fire can kill him (and the ancestral sword) but he cannot die by natural causes . He's been around for 13000 years . Sticky Realms years are the same as earths. But it passes differently . One Earthyear equals to 1156 Sticky Years . So 13000 Sticky Years equals to 11 Earth Years

He's a very smart person . He graduated from Oxford , Hardvard and Jackson university within a time period of 6 years . He has a doctorate and a Nobel prize . He invented a working time machine and has a I.Q of about 210

His magic comes from his realm . His magic is to invoke with Astral and Physical power . If he has a clear mind and uses it properly he can destroy a planet with its power . With a Mind full he can use it to destroy a Country . His Magic can harm Damons

As a Damon he is resistant to all forms of magic . A Damon is granted the Resistance so Magic users couldn't be above them . He is not resistant to powerful magic users however .

He can see something a remember it . He can see you but something a certain way and he can do it the same way 99.999999% perfection . His memory only lasts for a few days though. But if he tries to remember too much it puts a strain on his mind and can knock him out

His "Sticky" Substance is actually a very dangerous form of Radiated power . It's able to harm the likes of Fire Damon and Star Storms . It can also have a Liquid Acidic Form . It is able to burn through solid steel . That means it can reach a temperature of °3000

He can react within a Microsecond.So that means he is 1000 times faster than the blink of a human eye

He can run up to 100 Times the speed of light . He's also able to outrun the gravitational pull of a black hole

Like any other Damon he is very strong . He is capable of lifting the moon with ease . But he can lift a planet the size of Saturn if he needs too . But that is his max strength for his base form

His Sticky like I said is very toxic . But he can make it non-toxic and swing around just like Spider-Man . It's durability is able to take on 450 Megatons of force

He's fluent in Stikai , Spirit and Karate. He's bested Spirit and Ice Age as well and they are some of the best fighters in the universepunch

He's a Multi-Continent level. He's able to take on Base Leopard King and is still far above any street level and with one punch to the ground he's destroyed Africa , Asia and Europe's Surface

He's a Multiplanet level. He's able to fight a weak star Storms and Is above ice age . He shot a blast out that destroyed 15 Planets

He's a Multi Solar System level . One time he's destroyed a galaxy with a shock wave from colliding fists with Brian jenkins

Hes a Multi Galaxy . When Fighting Star Storms he's punched a whole straight through him .

He's Universal+. He gain s Warping Reality on a multigalactic Scale . He is able to destroy universes with a single punch