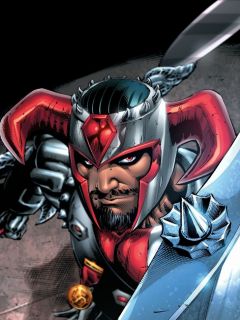 After his Yuga Khan being imprisoned in the Source Wall, his sister Queen Heggra became absolute ruler of Apokolips and he was promoted by his sister, to the post of commander of the army. During the time of Heggra's reign, Darkseid suggested to him organize an army to invade New Genesis, so they could partake of a sadistic sport:hunting and killing the civilians.

Steppenwolf's soldiers attacked Izaya the inheritor,until Avia intervene to save him,but Steppenwolf seeing movement behind whirled and fired a fatal radion bolt at her,not realizing she was Izaya's wife,later Darkseid rendered Izaya unconscious with a blast from his "killing gloves". Then Darkseid, along with a now suspicious Steppenwolf returned to Apokolips.

After the death of his wife, Izaya lead New Genesis forces against Apokolips in act of vengeance, making the two planets go to war. Darkseid gives to Steppenwolf the command of the Dog Calvary to hold New Genesis raid,but ended killed by Highfather. All this was nothing more than a Darkseid's plan to poisoned his mother and take over throne without the intervention of his uncle. Sometime later Steppenwolf was resurrected through Desaad invention and became Apokolips military leader under Darkseid's command.

Thousands of years ago, Steppenwolf accompanied Darkseid to the planet Bylan 5 so that Darkseid could wed the princess of the planet. In actuality, the devious duo really wanted access to the precious resources of the planet and were using the marriage as an excuse to obtain it. However, the monster Doomsday appeared and quickly began wreaking havoc on the planet, even managing to kill Master Mayhem. Angered, Darkseid attempted to engage the monster but Steppenwolf decided it was best for them both to retreat as the Bylan 5 was essentially destroyed.

Steppenwolf's main job is commander of Darkseid's Dog Calvary. He trained the dogs and men to work in Darkseid's main army. His best warrior was Canis Major. When Canis Major had a son, Canis Minor, he tried to train the boy to fight. All the lad was interested in was art. Eventually the boy killed his father and took his place as Canis Major. It turned out the son was allot better then his father. When Steppenwolf found out about this, he told Darkseid. Darkseid ordered Steppenwolf to kill the son saying, how he preferred his father.

Steppenwolf served as the true leader of the Darkseid Club while in human form (he was named Steppenwolf). However he was quickly killed by the new Clock King, who then proceeded to usurp control of the club.

Steppenwolf appeared as one of Darkseid's Elite along with DeSaad in the Justice League's revised origins. The pair were torturing Superman on Apokolips, until Cyborg manipulated their Mother Box's and sent them to Earth-2 and left them stranded on Earth-2 and unable to return Apokolips.

Steppenwolf next appeared in Earth-2 as main adversary for Kal-L, Wonder Woman and Batman as he tried to take over Earth-2 in Darkseid's name, often mind controlling the countries of Earth he defeated with an Anti-Life Generator and wanted to use them as members for his army against the World Army until, Terry Sloane bombed the countries under Steppenwolf's control.

As Diana was fighting a horde of Parademons, Steppenwolf opened a boom tube behind them and stabbed Diana in the back with his sword despite the cries of Superman warning her of his presence and watched as Kal-L was killed in a swarm of Parademons, however, Batman was able to upload his virus to the beacon towers thereby deactivating all of Steppenwolf's Parademons and thereby securing a victory for the World Army.

After the war ended, Steppenwolf sought asylum with King Marov in Dherain. Steppenwolf with the help of Fury launched a preemptive strike against Marov as Marov himself was planning to kill Steppenwolf and collect the bounty on his head. While his men were being defeated by Fury, Marov detonated an explosion to give himself time to suit up to fight against Steppenwolf. Marov then had his his men outfitted in updated Parademon schematics to fight Steppenwolf, they however, were not a challenge to Steppenwolf and he cut them down with his Battle-Axe, revealing the reason he came to Dherain was because he wanted to take Marov's throne. When Fury killed the last of Marov's men, Steppenwolf then threw his Battle-Axe through Marov's body, killing him as he tried to attack. Steppenwolf later decapitated Marov to show to his people that, now that Marov was dead they had no else to stop the World Army from coming for them due to their role in supporting Apokolips during the invasion and had to grudgingly Steppenwolf as their new King. Steppenwolf later commented to Fury, that Dherain was not enough for him since he wanted to take over the entire world and wanted to start preparation for the World Army's expected arrival.

However, the Wonders of America wouldn't give up and Alan Scott went to attack Steppenwolf and eventually gained the upper hand until Brutaal blasted Alan in the back with his eye beams while he was focused on Steppenwolf. When Al Pratt tried to intervene in the subsequent beat down of Alan Scott, Brutaal knocked him out with a backhand and together he and Steppenwolf proceeded to pound away at Alan Scott who was helpless to retaliate. After they had finished, Steppenwolf went to a reporter to announce to he World that the World Army hadn't been able to stop him and before he could continue with his speech, Brutaal cut him in half vertically with his hand and revealed as his armour began to fall away that he was Kal-L, the previously thought dead Superman of Earth-2 and now a loyal servant of Darkseid.