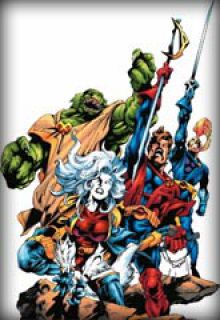 The story of the Starjammers began with Christopher Summers, a military pilot returning with his family from a trip to Alaska. Without warning, their plane was attacked. Chris's wife, Katherine, strapped their two sons (Scott Summers and Alexander Summers who later became the X-Men Cyclops and Havok) to their only parachute and pushed them out of the plane, saving their lives. The husband and wife were then teleported from their plane to the ship of an advanced alien race called the Shi'ar. This... read more

Starjammers doesn't have any members yet.