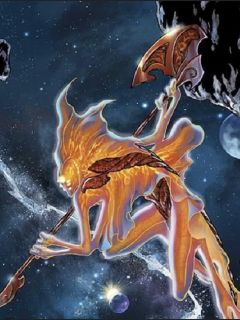 As Herald for the world devourer, Galactus, Stardust found suitable worlds for his master to consume. Stardust also performed above his master's expectations as he would track down and destroy any inhabitants of a world that happened to escape the destruction, so he would wipe out any trace of their civilization. Stardust first met Beta Ray Bill as Bill was trying to defend his people, the Korbinites, who happened to be the next target of Galactus. Their planet was eventually lost, but the remaining survivors had transferred their life essences into an orb that Beta Ray Bill would protect until he could find a new world for his people to inhabit. Stardust, however, had other plans as he hunted Beta Ray Bill.He was determined to wipe out the Korbinite�s existence forever. The two engaged in battle and Bill would not fall knowing that he was the last hope for his people. Eventually, Stardust called upon his powers to open a dimensional gateway to banish Beta Ray Bill and his people into, but instead he unwittingly released a foe greater in power and evil than either have ever confronted. Asteroth was now let loose upon the universe, and it was up to both of them to stop her. Galactus, meanwhile, had repaired the damage done to a fallen Korbonite, Alpha Ray, and sent him to intercept Stardust and Beta Ray Bill. Stardust, knowing that Asteroth had to be banished from this plane of existence, used his immense cosmic abilities to create a black hole. Alpha Ray arrived just in time to deal a major blow to Asteroth and drove her into the black hole removing Asteroth as a threat. Stardust became a victim of his own creation as he could not escape the black hole's gravity and was consumed as well.

Stardust eventually returned to his master�s side and was present at the time of the Annihilation Wave. Galactus sent Stardust to join two other former heralds, Firelord and Red Shift, in opposing the forces of Annihilus before taking the Silver Surfer as his herald once more. While in battle with Anihilus's forces on the planet Daedalus 5, Stardust and Red Shift detected the presence of Galactus, who had been turned into a weapon by Thanos. Stardust saved Gamora during her battle with another former herald, Terrax, and reunited her with the rest of the rebellion. In order to give Nova and his remaining forces time to evacuate, Stardust and Red Shift seemingly sacrificed themselves by delaying the destruction of Daedalus 5 by temporarily holding back the cosmic energies of Galactus before they could consume the planet.

Stardust, in time, was able to reform himself in the Andromeda Galaxy unclear of what drew him there. While traveling back to the side of his former master, Galactus, Stardust intercepted a cluster of alien life forces that he recognized to be of his race, the Ethereals. The fifty three entities that formed the group explained that the Annihilation Wave wiped out their civilization, and they were the last of their kind. They branded Stardust as a traitor since he was off helping the Corporeals, the Solid Ones, in fighting their war instead of aiding his people and attacked him. Stardust was unwilling to listen to the accusations and struck back using the Power Cosmic to obliterate the entities. However, horrified at his rash actions, Stardust siphoned their essence into him and was willing to use them as his conscience as they now shared a destiny. Finally, Stardust reached Galactus who was in a weakened state because of the energies he used to defeat Aniihilus� forces. Asking to be taken back as herald once more, Stardust was asked by Galactus for a show of loyalty. Knowing exactly what Galactus wanted, no matter how monstrous it may have seemed, Stardust obliged and willingly gave the fifty three beings residing within him to Galactus to feed upon and partially replenish him. Galactus took Stardust back as a second herald and showed him a glimpse of the future where the Silver Surfer will turn on Galactus once more, and Stardust will be called upon to stand at his side. It is then that Stardust revealed that both corporeal and ethereal beings are equally useless to him and only one being in the universe commands his allegiance and his love�Galactus.