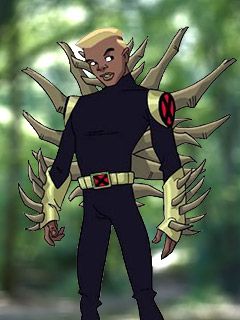 Evan Daniels was born in New York, New York to Vivian Daniels and Mr. Daniels. His mutant powers are first noticed at his high school basketball game by his Aunt Ororo (aka Storm (a longtime member of the X-Men), and his teammate Pietro. The next night Storm, along with Cyclops and Jean Grey, approached Evan's parents about his mutant powers and attending Xavier's Institute. Evan angrily declined on his own behalf and leaves.

He went to his school to catch the thief who kept breaking into his locker. The thief was Pietro, a mutant with super speed powers. Pierto, who renamed himself Quicksilver, broke into all the lockers in the school and let Evan take the heat as he escaped prosecution. Only when Professor X used his pull to help Evan get out of prison did he join the X-Men and the school under the code name Spyke. Spyke settled the score with Quicksilver when he, Cyclops and Jean defeated the speedy mutant. Spyke was cleared of all charges when he caught Quicksilver's arrogant confession on tape.

During his tenure with the X-Men, Spyke didn't want any special treatment from anyone at the school because he was Storm's nephew. Though he liked being an X-Man and thought of them as his family, Spyke at times acted selfishly and inconsiderate of others. Spyke would goof around in class and on at least one occasion ditched school mid-class to go skateboarding with his then human friends. He also was late for several training exercises in the Danger Room resulting in the other X-Kids getting reprimanded because of him. If not for him saving Storm's life from the Hungan, Spyke would have been sent home to his parents due his lack of concern for school and DR training.

After he and the other X-Men were discovered to be mutants, Spyke grew angry at how they were being treated. After drinking Pow-R8, an energy drink that was toxic to mutants even by touching it, Spyke found out he could not retract or fully control his spikes. After seeing how cruelly he was treated because of his condition, Spyke joined the Morlocks (a mutant street gang) because he wanted to fight for mutants that look different from normal humans. Storm did not take this well and tried to convince Spyke to come back but he refused. When he returned he had mutated even further, and most of his upper body was covered by armadillo-type bone-plates except for his face and below the waist. He later helped out in destroying the Pyramids surfaced by Apocalypse.

Spyke was last seen in a group photo with the X-Men, the New Mutants and their unaffiliated allies. In this photo he was wearing the bottom half of his X-Men costume, hinting that he may have rejoined, if only temporarily.