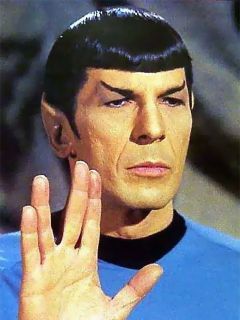 Spock's mother, Amanda Grayson, was a human schoolteacher from Earth and his father, Sarek, was a respected diplomat. For most of his life, Spock was torn between his emotional human side and the stern discipline of his Vulcan half until his experience with the V'Ger machine-entity in 2271 and his later death and rebirth in 2286 broadened his perspective. As of 2267 he had earned the Vulcanian Scientific Legion of Honor, had been twice decorated by Starfleet Command and held an A7 computer expert classification.

As a child, Spock had a pet sehlatā??a cuddly Vulcan bear-like animal with claws and fangs. His older half-brother, Sybok, who was ostracized from Vulcan because he rejected the way of pure logic, was killed in 2292 after battling an alien entity at the galaxy's center that claimed to be 'God.'

At age 7, Spock was telepathically bonded with a young Vulcan girl named T'Pring. The telepathic touch would draw the two together when the time was right after both came of age: once every seven years all Vulcan males experiences pon farr, a powerful Vulcan mating drive which demands that they mate or die. In 2267, however, T'Pring chose Stonn, a Vulcan, over Spock, and the Vulcan returned to the U.S.S. Enterprise unwed. He did eventually marry in a ceremony attended by Lt. Jean-Luc Picard.

Because the young Vulcan chose to join Starfleet, he and Sarek opened an 18-year rift over Sarek's hope his son would attend the Vulcan Science Academy. Spock was the first Vulcan to enlist in the Federation Starfleet, serving aboard the U.S.S. Enterprise under Captain Christopher Pike as a lieutenant, and later for James T. Kirk.

After the conclusion of the U.S.S. Enterprise's five-year mission, Spock retired from Starfleet and returned to Vulcan to pursue the emotion-purging of the kohlinar discipline from the Vulcan Masters. Although he completed the training, Spock failed to achieve kohlinar because his emotions were stirred by the V'Ger entity in 2271. He then reentered Starfleet and was eventually promoted to U.S.S. Enterprise captain when that ship was assigned as a training vessel at Starfleet Academy.

Spock sacrificed himself in 2285 to repair plasma conduits that allowed the U.S.S. Enterprise and its crew to escape from the detonation of the Genesis Device by Khan Noonien Singh; his radiation-wracked body was consigned to space but landed on the newly formed Genesis Planet and began regeneration. Prior to his death, Spock had mind-melded with McCoy to transfer his katra, apparently intending for his longtime friend and sparring partner to return it to Vulcan and perhaps be fully regenerated in the fal-tor-pan or refusion process, conducted for the first time in generations.

In later years, Spock's work became more diplomatic than scientific, initially remaining a part of Starfleet. In 2293, he served as Federation special envoy to the Klingon government, paving the way for the Khitomer peace accords with Chancellor Azetbur. That peace came about with great difficulty and personal turmoil for Spock, in that a conspiracy to sabotage the talks through the assassination of Azetbur's father, Chancellor Gorkon, and the subsequent framing of Kirk and McCoy, involved his own Vulcan protĆ©gĆ©, Lt. Valeris.

After decades as a civilian, in 2368, Spock secretly traveled to Romulus on a personal mission to further the cause of Romulan/Vulcan reunification ā?? a mission which shook up the Federation so that Captain Jean-Luc Picard was sent undercover to determine his motives. On the same trip he was saddened to hear of the death of his father, Sarek, but Picard's presence allowed Spock a final last solace thanks to an earlier Picard-Sarek mind meld. Spock remained to work with the Romulan underground and in 2369, helped arrange the defection of Romulan vice-proconsul M'Ret to the Federation to pioneer an escape route for dissidents.

In 2387, a Praxis-like emergency opportunity for cooperation arose as an expanding supernova threatened to engulf Romulus, allowing Spock to head a project to stem the nova's massively destructive advance. The use of red matter was intended to create a strategically placed black hole to thwart the nova, using a special one-man science vessel, but renegade miner Nero's Nerada vessel attacked him and caused both vessels to be lost in the singularity Spock created. The project also failed to save Romulus in time, although the anomlay's expansion was halted and numerous other worlds were preserved.

Spock carried a life-long interest in art, music, literature and poetry from many worlds, especially Terran, and played both tri-dimensional chess as well as the Vulcan lute or harp and a keyboard harpsichord.
Superhero Class