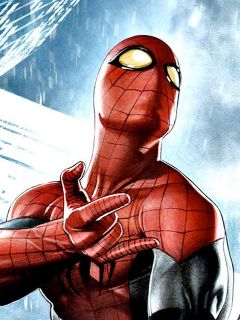 One evening, Parker attended a public exhibition demonstrating the safe handling of nuclear laboratory waste materials sponsored by the General Techtronics Corporation. During the demonstration, a small common house spider happened to be in the path of a particle accelerator's beam and was massively irradiated. The stricken spider fell on to Parker's hand, broke his skin with its fangs, and died.

With his hand burning from the bite, Parker left the exhibition. Parker made his way home and passed through an unfamiliar section of the city, where he was accosted by a gang of hoodlums. Tossing the gang members aside, Parker was shocked by his own display of strength. As he fled from them, he ran into the path of a speeding car, and leaped to safety about thirty feet up onto a nearby wall. To his growing surprise, he discovered that he was able to stick to the wall with his fingertips. As he easily walked down a guy wire to the street below, he realized that he now possessed a superb sense of balance. Parker quickly associated these spider-like abilities with the bite from the irradiated spider.

Parker went home, where his Aunt May sent him on an errand to deliver clothing to a charity drive located in a nearby National Guard Armory. There, he saw a wrestling match which offered a prize for anyone who could remain in the ring for at least three minutes with a professional wrestler. Interested in testing his new-found powers, Parker decided to accept the wrestler's challenge. Wearing a mask to conceal his features to avoid embarassment in case he lost, he easily defeated his opponent.

A television producer's talent agent spotted Parker at the wrestling match, and promised him a segment on a network variety show. Parker, calling himself "the Amazing Spider-Man", accepted the offer and decided to use it as a springboard to a show business career as a spectacular stunt performer. Over the next several evenings, Parker used equipment borrowed from his high school to fabricate a fluid that imitated a spider's silk web, and design spinneret devices to project that fluid from his wrists in the form of a web strand. He also silkscreened his original design for a costume onto a body stocking and full-head mask. Thus prepared, Peter Parker appeared as Spider-Man on national television and was an immediate media sensation.

When the television show ended, a burglar, being pursued by a security guard, ran by Parker who impetuously allowed him to pass, although he could have easily stopped him. When reprimanded by the guard, Parker arrogantly replied that he was a professional performer, and that chasing criminals was the guard's job. Parker promptly forgot the incident.

A few days later, Parker returned home to find that his Uncle Ben had been murdered by a burglar. A police officer informed him that the burglar had been trailed to a nearby abandoned warehouse where the police had him trapped. Grief-stricken, Parker rushed to the warehouse to seek vengeance. At the warehouse, Parker, as Spider-Man, easily captured the burglar and realized that he was the same person that he had allowed to run past him earlier that day in the TV studio. He realized that if he had acted responsibly earlier, he might have prevented the death of his uncle. Filled with remorse, he realized that with power comes responsibility, and he vowed to never shirk that responsibility again.

Peter began to use his powers to fight crime. He also tried to join the hero team the Fantastic Four in their formative stages, but was dismissed. As a solo hero, Parker took pictures of his fights as Spider-Man using an automatic camera, and then sold the pictures to The Daily Bugle. Spider-Man rapidly became one of the most well-known citizens in New York City, although Bugle editor J. Jonah Jameson soon branded him a "menace". Parker's main concern was for his Aunt May, who he feared would have a heart attack if she ever found out about his crime-fighting identity.

Early in his career, Spider-man fought the master of disguise, the Chameleon, the high-flying, low-down Vulture, the terrible Tinkerer, the tentacled terror Doctor Octopus, the sand-shifting Sandman, the diabolical Doctor Doom, the lethal Lizard, the electronical Living Brain, the electrical enemy Electro, the Big Man and his Enforcers, the mysterious illusion master Mysterio, the megalomaniacal Green Goblin, and the predatory Kraven the Hunter. Several of these villains would form the Sinister Six, a team completely dedicated to the destruction of Spider-Man that would change its roster many times over the years.

During this time, Parker dated Betty Brant of the Daily Bugle, although Liz Allan had a crush on him. At the same time, both Aunt May and her neighbor, Aunt Anna, were encouraging Parker to date Anna's niece, Mary Jane Watson, whom he would not meet until months later.

Before the graduation from his high school, Peter, ever the superhero, continued to fight off menances, including the Circus of Crime, the sinister Scorpion, the Beetle, the Spider-Slayers, the Crime-Master, and the Molten Man.

After high school, Parker enrolled in Empire State University, and divided his time as a hero, a student, and photographer. Eventually, Parker moved into his own apartment with Harry Osborn, the son of Norman Osborn, the Green Goblin. It was Norman Osborn, in fact, who became the first supervillain, the first person even, to learn Spider-Man's secret identity. During this time, he developed a relationship with Gwen Stacy. He fought the Rhino, the second Vulture, the Shocker, the Kingpin, the Prowler, Silvermane, and Morbius the Living Vampire. Unfortunately, during Spider-Man's conflicts with Doctor Octopus and the original Green Goblin, both Captain George Stacy and Gwen were killed (albeit at different times). Some time later, Parker developed a steady relationship with Mary Jane. Parker proposed marriage, although Mary Jane declined, and soon left Parker's life for many months.

Eventually, Parker graduated from ESU, and pursued his career as a hero and photographer. As he continued to live on his own, his Aunt May decided to transform her house into a senior citizens' boarding house. At one point Parker began a romantic relationship and heroic partnership with the Black Cat, although Parker later broke it off due to the Black Cat's disdain for Parker's life apart from being Spider-Man.

Prior to this, Spider-Man was among the heroes kidnapped by the powerful Beyonder to fight in his so-called "Secret Wars." When his costume was damaged, Parker tried using the futuristic technology on the Beyonder's planet to repair it, and instead, replaced it with an alien "symbiote" which transformed into a black version of Spider-Man's costume, perhaps based on the newly appeared Spider-Woman. Parker used the symbiote for his costume, which was capable of transforming into street clothing as well as generating webs. When the costume behaved strangely, Parker sought help from the Fantastic Four's Mister Fantastic, who discovered the costume was a living organism. He helped remove the costume by force, and kept it in Fantastic Four headquarters in captivity. The symbiote would later escape, plaguing the life of Parker again and ultimately merging with one of Spider-Man's critics Eddie Brock, creating the villain Venom.

As Spider-Man, Parker met and fought alongside nearly every hero in Manhattan, if not the world. Although he fought with the hero team Avengers many previous times, he tried to join their number when he learned of the financial stipend their members received. Parker helped them stop an invasion and subsequent breakout of the energy research and villain internment facility, Project Pegasus. Spider-Man was deemed, however, to disrupt the team's cohesiveness, and was denied membership. Later, however, Spider-Man met the international mercenary Silver Sable, often working on her behalf.

Later still, Mary Jane returned to Parker's life, and, after a battle between Spider-Man and the Puma, she revealed that she had known (or at least suspected) Peter Parker's secret identity from almost the beginning of his career. Soon after, the two were married.

Peter's old friend Harry Osborn leased the couple a loft in the building that Harry and his family were also living in. Mary Jane's niece Kristie also temporarily moved in with the Parkers at one point. Eventually, however, the Parkers had to move into a room in Aunt May's house due to financial problems.

At this time Spider-Man once again allied with the Avengers to stop the alien Nebula from destroying reality with her Infinity Union. An increasingly unnerved Spider-Man, unaccustomed to dealing with cosmic-scale menaces, accidentally allowed Nebula to absorb the power of the Infinity Union, although the Avengers, Spider-Man, and the alien Stranger thwarted her regardless. Parker was told again that Spider-Man may not be suited for Avengers membership, although later he was inducted into their number on a provisional basis.

Parker later returned to his studies and postgraduate work as a lab assistant at Empire State University. During this time, Parker was briefly endowed with the powers of Captain Universe, in order to stop a series of robots, including the mutant-killing Sentinels. Once the menace was defeated, the extra powers left him.
Superhero Class