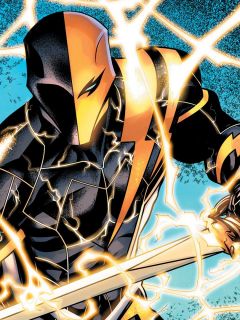 In an act of desperation to get his deceased son, Grant back, Slade captured the Flash and made him an offer: if Flash uses his powers to go back in time and change the past so Deathstroke's son doesn't die, Slade will quit being Deathstroke. Although tempted by the offer, Wally refuses. Slade then reveals to Wally that he had also captured his cousin, Kid Flash, as a contingency.

Now free from the Speed Force, Deathstroke then tells the Titans he seen things in the Speed Force no man should ever see, and that all of them, including him deserve to die. Slade then dropped his mask and claims "Deathstroke is finished.