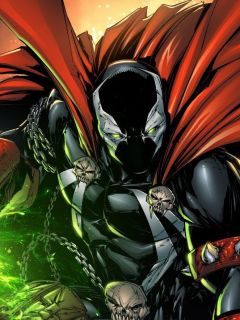 By emitting a specific pheromone, Spawn can call upon creatures of darkness to his beacon. The creatures will attack beings of light if present.

Spawn can control the actions of creatures of darkness and sin. Namely Wolves, Bears, Worms, and Bats. They have been used to attack enemies such as Tiffany or Cy-Gor by mental command.

Spawn has vast magical powers. In the issues before issue #50, Spawn had a limited power supply or "9999". Each time Spawn used his energy, the counter would drain. Because of this, he relied primarily on his costume's natural abilities in fights.

Other than the counter problems he had, the only limit to Spawn's mystical ability was Spawn's imagination. Having been able to conjure up a car key using his mystic energy, materialize a box of fine wine for his friends in the alley and even resurrect the dead at the cost of his necro meter.

Spawn can expend necroplasm to cause bombs. A small amount, as little as 5 units have been used to take care of a group of men.

With the power of his cape, which acted at times like a giant parachute, Spawn is able to perform a flight of sorts. With the abilities given to him by Mother, he flies due to a pair of giant, breathtaking white wings that give him an almost celestial appearance.

As long as his head is intact, Spawn cannot die.

Spawn can phase through walls and tends to use shadow to his advantage to cover his tracks.Spawn #109

Spawn has a psychic link with Sam Burke and Twitch Williams. He subconsciously choose them as his accolades and can call upon their assistance and find their location at times. He was also linked to Nyx by her Shadow Thread before she gave up her control to Mammon.

Spawn can create portals to cross dimensions or to travel to other planes of existence, such as Heaven or Hell.

Spawn has regenerated entire holes in his chest, broken arms, his heart missing from his chest, and blown out knee caps instantly with the use of his Necroplasm.

A rejuvenating energy transfer. Black Energy Transferal is a creature to costume kinetic energy transferal that can jump start the K7-Leetha Costume. Creatures such as rats or worms that never see the sunlight are particularly ripe with evil and can transfer more energy to rejuvenate Spawn's costume and body.

In Spawn's early years, he did not have complete control over his powers. He spent 563 necroplasm units in an attempt to fix his scarred body, but only for a temporary time period.

Spawn can transfer the sins of others into himself and purify the souls of others.

After his powers were brought back to bear by his daughter Cyana. Al started coming into an entirely new ability set since his return from endgame. Spawn now has the ability to control the resuscitation or reanimation of both the living and the dead, using such a power he had been able to command the loyalty of countless former enemies whom he'd dealt with in the past whom he restored to life.

Simmons can commandeer lifeless cadavers to do his bidding, even letting them retain their personas from when they were alive.

Spawn brought back his good friend Bobby from the dead.

Using his other powers in conjunction with his command over the dead. He can call upon an army of deceased to aid him in battle when needed.

Spawn's body is quite dense, weighing over four hundred pounds, and is composed completely of necroplasm. While he still has internal organs, they are non-functional, and their damage/destruction does not hinder Spawn in the least. These organs re-appear when he magically regenerates his wounds. This may be due to Spawn's inability to let go of his human self, retaining his human organs even though he no longer requires them.

The combination of his Necroplamsically charged body coupled with the K-7 Leetha has given Spawn an indeterminate amount of physical ability. While initially only capable of pressing 5 tons of pressure, Simmons found he could further strengthen himself via use of his Necroplasm or by feeding on the malefic energies of certain animal life around him. While battling Urizen, Spawn was able to lift and throw an entire building with ease. During his battle with Anti-Spawn, he punched through his opponent's face even while he was wearing armor. He is also able to physically overpower normal humans and even other supernatural creatures.

He is able to dodge multiple bullets with inhuman efficiency.

Spawn's tissues are far denser than those of an ordinary human, his skin is far harder to pierce and he can survive with little injury great impact forces that could obliterate a human being. Aside from his great durability Spawn has the ability to keep functioning and fighting even after being dismembered or gutted.

Spawn has used his telekinesis to shut doors to keep enemies from escaping.

Spawn showcased a form of memory manipulation, where he placed a symbol upon Terry and his children's foreheads and told him that by that next morning, they would forget they ever saw him.

Spawn has demonstrated the ability to stop time with a thought.

Spawn specializes in Matter Manipulation. His K7-Leetha suit can transmute molecules around it to manifest what thinker needs if thinker knows fundamentally about the object and has a clear head and strong will.

Spawn has an ability to "feel" or "sense" misery, pain and hatred as a gift/punishment given to him by The Keeper, an agent of the Emerald Parliament of Greenworld. He is aware, even subconsciously when someone is attacked or murdered because he has gained a further affinity with the creatures of the night and shadows and through them experiences the anguish of all mankind.

Spawn can also transform into a swarm of bats and transports from place to place. He has done this on several occasions.

Initially, Spawn was shown to contain an unknown number of lost souls who can share his Hellspawn abilities that are collectively known as The Legion. Detective Twitch theorized that the souls that Spawn carries are those that died during the same hour that Al Simmons was killed and that there could be as many as 6,000 souls within him. It seems that the power from these souls is the reason Spawn was uncontrollable by Malebolgia, and often referred to as "The One". With the help of a young Spawn (Christopher), he is able to summon them to aid him in his quest to stop Armageddon. It was believed that these souls had long since transmigrated after he'd spent what remained of his battalion in his battle against Mammon and the demonized daughter Al never knew he had named Morana. In truth, however; Cogliostro surmised that this was not the case, that if anything the number of souls Simmons could summon to fight on his behalf were inexhaustible as the discrepancy found in Spawn's own soul made him a focal point for every soul he'd murdered as well as every Hellspawn that ever existed across history. Meaning he can potentially conjure an army of all the most powerful sinners from across time to aid him in battle if need be.

Following Issue #161, the Man of Miracles had given him fruit from the Tree of Life and propelled his power to relative-omnipotent levels, enabling him to rival God and Satan. Now with the powers equal to both God and Satan, Spawn is the third power in the battle of Armageddon. Spawn has apparent control over the Earth itself, using it to his will when in the battle against both armies. Spawn used the Earth to swallow all other Hellspawn and imprison them back in Hell.

After visiting Greenworld, Spawn found he could control the forces of mother nature.

Simmons can conjure and manipulate plant life to most any effect he desires, having summoned an entire forest to instantly form around opponents to capture them.

Al utilized his connection to the Earth to swallow the elder god Urizen and trap him back within the earth whence he came.

Spawn has summoned tidal waves to vanquish his enemies.

Despite his brutal and intimidating appearance, Al's most dangerous power is his cunning intellect, which helped him out in his military career and in his career as Spawn.

Spawn typically travels in the shadows, even "flying" on occasion. He is often described as notoriously difficult to spot, often only caught out of the corner of one's eye as just a streak of red (his cape).

Having received decades of military training and had been a noted well-experienced street fighter, it's no doubt that Spawn is a master of hand-to-hand combat as well as martial arts. Having attained peak physical condition as a regular human, something he still retains after his death, he's an exceptionally talented acrobat and athlete and in his early years showed great potential in someday becoming an Olympic athlete. Spawn has mastered thirteen forms of martial arts throughout his life and career, all including Judo, Jujitsu, Karate, Kung-Fu, Jeet Kune Do, Aikido, Taekwondo, Boxing, Brazilian Jujitsu, Hapkido, Muay Thai, Ninjutsu and American Karate. He also briefly studied Taekkyeon and was also highly adept in swordsmanship and marksmanship

Spawn wears a living symbiotic costume. His cape, spikes, chains, and skulls are all part of one organism that will protect Spawn even if he is unconscious. Violator once said the suits feed on souls. The true source of the costume is the necroplasm in Spawn's body, which it feeds off of. It is possible for Spawn to draw this energy back when he needs it, using it to power his abilities without draining his own reserves. The costume can also feed off evil energy from the physical world, feeding off the ambient evil of people, animals (mainly carrion insects, but also wolves and bats) and even certain parts of the city. Spawn has vast magical powers. In the issues before issue #50, Spawn had a limited power supply or "9999". Each time Spawn used his energy, the counter would drain. Because of this reason, he relied primarily on his costume's natural abilities in fights. Other than the counter, the only limit was Spawn's imagination. Though he always tried not to expend a lot of magic, he has been shown using it for a variety of effects including resurrecting the dead, firing blasts of necroplasmic energy, teleportation, shapeshifting, and curing the sick. Spawn has an ability to "feel" or "sense" misery. He is aware, even subconsciously when someone is attacked or murdered.

Recently, Spawn has taken every other HellSpawn into himself and with the help of a young Spawn (Christopher), he is able to summon them for aid.