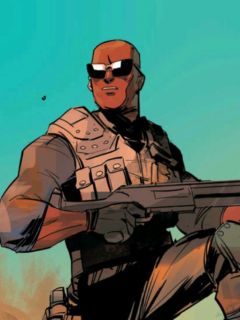 As a former soldier, bodyguard and vigilante, John is in top physical condition. He engages regularly in intense exercises and spars with Oliver Queen in the Arrowcave during his spare time. Due to his build and training he received from both his time in the military and with Oliver, John is remarkably strong. Oliver even commented that his arms "are the size of bowling balls". John's physical conditioning has eventually developed enough to allow him to battle against some of the most physically powerful fighters in the multiverse.

John is a highly skilled fighter, having developed his skills during his time as a soldier. He is well-trained in the armed forces disciplines, and has mentioned that he was once a part of Special Forces. He has considerable experience in live combat, having served three tours in Afghanistan. During his time as a vigilante, John's skills were already great enough to be able to stand up to China White, Floyd Lawton and Daniel Brickwell before he was eventually overpowered, keep up with Oliver during their sparring sessions, and alongside him, was able to pressure Malcolm Merlyn, forcing him to incapacitate John via a knife throw. His style appears to incorporate wrestling, muay thai, boxing, and jiu-jitsu. Training with Oliver over the years have greatly improved John's fighting skills, adding wing chun and eskrima to his style. John is skilled enough to defeat multiple members of the League of Assassins combining his firearms skills with his combat training, go up against Oliver after he was trained by Ra's al Ghul for a time and land some blows, take out multiple Shadowspire agents with ease while unarmed and even single-handedly defeat several of Talia al Ghul's acolytes without any injuries, despite the fact they were armed with a sword and John himself was unarmed. John was also skilled enough to overpower and nearly capture Black Siren, forcing her to flee, defeat Dinah Drake armed with her bo-staff, rival and eventually defeat Onyx Adams, a far more experienced and well-trained master martial artist with centuries of experience and training as a member of the League since 1743, and hold his own reasonably well against Ricardo Diaz, an extremely skilled martial artist capable of rivaling Oliver, for quite some time. Ultimately though, Diaz overpowered John and escaped. John also stood up to Oliver when they ferociously argued over their former teammates and proved capable enough to stalemate Oliver until Felicity separated them, although Oliver was clearly holding back. Being an A.R.G.U.S. agent has apparently improved John's abilities even more as he is capable of going toe-to-toe with and even knocking down Diaz in order to flee in their recent altercation when Diaz was injured by a knife-throw to the shoulder, although he could not truly defeat him and struggled to force him back.

As a former soldier, John is shown to be highly skilled with multiple types of firearms, including pistols, assault rifles and sniper rifles. He is extremely accurate, as he was able to shoot Danny Brickwell in the head. John also has excellent marksmanship with crossbows, as seen when he used the Green Monster during his tenure as Green Arrow.

John is an excellent knife wielder. When practicing kali knife-fighting techniques with Oliver, John was able to keep up and even complimented by Oliver on his pace. In his second confrontation against Diaz, John accurately threw a knife into the latter's shoulder.

John is an expert stick fighter, capable of wielding an expandable baton as a close-quarters combat weapon. John could match up to Oliver whenever they sparred using sticks. In a training session, he and Oliver teamed up in a practice fight against Sara Lance using bo-staffs. John also regularly sparred with sticks against Dinah.

John is a very skilled archer, showing high levels of proficiency in archery when he posed as the Arrow, though his skills are not at Oliver's level.

Despite never been seen training with swords, John is accomplished enough in swordsmanship to briefly stand up to Oliver after he was trained by Ra's al Ghul, but was soundly overwhelmed.

Due to his time in the military and with Team Arrow, John is an expert at formulating plans and executing them and also thinks ahead in case things don't go his way. When he was overhearing a conversation between Moira Queen and Malcolm Merlyn with a hearing device, John also had a pack of cigarettes and a lighter in his pocket in the event he was caught, which did happen; he pretended he was looking to have a smoke. As an ex-Special Forces soldier, John is well-versed in intelligence gathering, decoding ciphers and other coded messages, infiltration, espionage and explosives. When he was given the mantle of Green Arrow from Oliver, John was at first unsure of himself as he struggled with making the hard calls, but after a heart-to-heart conversation with Oliver, he became more confident in himself and successfully led Team Arrow on multiple missions.

John is capable of drive multiple vehicles, such as a car and van. John was also trained to fly helicopters during his time as a soldier and used this training to transport Arsenal and Black Canary during Daniel Brickwell's takeover of the Glades. He also knows how to fly a plane, as shown when he attempted to escape with his friends from Lian Yu using Adrian Chase's plane.

John received medical training during his time in the army, allowing him to stitch up wounds and perform minor surgeries. With this skill, he was able to successfully remove a bullet from Oliver's chest with some help from Felicity. John usually acts as Team Arrow's main medic, patching up their injuries from the field.

John is capable of fluently speaking English, Pashto, and Arabic.

After his brother, Andy Diggle, tortured him, John was able to free himself and escape, despite experiencing some some blood loss.

As a former soldier and bodyguard, John has a wide array of contacts in the military and various intelligence-gathering establishments, including the F.B.I., Interpol, and the NSA. Through Lyla, John also became affiliated with A.R.G.U.S..