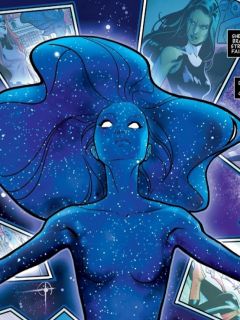 Singularity's origin and early history are largely a mystery. She first appeared as a meteorite streaking across the sky and crashing into the Battleworld domain of Arcadia near the Bishop Lighthouse where Nico Minoru was mourning the exile of her friend Ms. America to The Shield.

Nico took the girl from the crater home and tried to talk to her, but she had not spoken a single word since they'd first met. When Loki came into the room, wanting to comfort Nico because of what happened to Ms. America, she discovered the girl whom Nico had found, she explained that she must be shown to the rest of A-Force.

As the team was introduced to the newcomer, Medusa touched her with her hair, startling her. All of a sudden, a portal opened right above the women, dropping a hostile Sentinel into their midst. As the team defeated it, the strange girl displayed the power to teleport herself and others, saving Dazzler, as well as innocent bystanders. Immediately after the fight was won, Medusa accused the girl of being responsible for the portal. Skeptical, She-Hulk tried to determine the true source of the portal by jumping through the one the Sentinel came through, taking her to a devastated Bronx.

Shortly after She-Hulk arrived in the Sentinel Territories, she was attacked by a group of Thors for having left her domain. She fought them off and jumped back through the portal once more, where she concludes that the magic connected to it must have come from Arcadia, so there must be a traitor among them who tried to frame the strange girl and who was also responsible for Ms. America's banishment.

Once She-Hulk explained this to her teammates, the Thors she had previously fought against arrived and planned to exile her as well. Medusa gave the others a chance to flee by throwing the Thors back through the portal, which resulted in her death as she was struck by lightning summoned by Gamora.

As A-Force mourned the loss of Medusa, She-Hulk gave the order to alert the rest of Arcadia, for she knew the Thor Corps would come back for her. As she announced the plan to her team, Nico interrupted her because the strange girl has something to show them, to compensate for the kindness and trust she has been shown, the newcomer offered to conceal A-Force inside herself, as she spoke her first word: "Hide".

The strange girl then enveloped Captain Marvel, Dazzler, She-Hulk, and Nico and ran out of the city into the woods where she released them to hide in the woods. She-Hulk finished explaining to her team that the magic used for the portals was not only generated by Arcadian magic but must also be fueled by Asgardian magic, as she had seen a rainbow bridge when jumping through the portal.

Meanwhile, the Thors declared A-Force outlawed, and thanked Loki for her loyalty to Doom, stating that she most likely would become the next baroness of her domain. As Loki talked about keeping Arcadia safe and accepting the throne, she was suddenly attacked by A-Force, who again used the strange girl as a method of transportation.

Loki was defeated in battle and the Thors realized that she had been the traitor all along. As Loki accepted that there was no way for her to rule over Arcadia any longer, she used her magic to break a giant hole through The Shield that protected Arcadia from the Deadlands.

As Arcadia was attacked by the army of Zombies, the heroes and heroines of the domain join together to defeat them. While Nico was about to be attacked the same Megalodon that got Ms. America exiled, the strange girl swooped in to save her from the monster's strike and whispered her name into Nico's ear, Singularity. To save her friends and the domain, Singularity then absorbed all of the undead, flew up into the sky, and exploded in a flash of light while saying goodbye.

In the aftermath, She-Hulk comforted Nico, telling her that Singularity's sacrifice made the members of A-Force better people; however, Singularity was not really gone, rather she was literally resting amongst the stars.

Singularity next emerged in Earth-616 after Alpha Flight first encountered Antimatter near the Alpha Flight Low-Orbit Space Station. She remembered her time in Arcadia, but instinctively knew that world was gone and that this one was different. Reaching out for something familiar, she found Carol Danvers aboard the A.F.S.S., but was sad to discover Captain Marvel did not recognize her. When Antimatter returned, Singularity could hear the entity in her head, and stole an Alpha Flight Life Support Pod to flee.

Once again reaching out for anything familiar as she descended to Earth, the pod steered Singularity towards New York City, clipping New Attilan before crash landing in Manhattan, where she found Jen Walters. Unfortunately, She-Hulk didn't remember her either and the pair were soon attacked by Antimatter who had pursued Singularity from orbit. The two engaged Antimatter, but were vastly outclassed. When Queen Medusa arrived with a large force of Inhumans, Singularity recognized her voice and was overjoyed to see her alive; however, Medusa had other ideas and placed handcuffs on Singularity, planning to hand her over to Antimatter.

When Antimatter killed an Inhuman, it convinced Medusa that She-Hulk was right, they could not simply turn over Singularity, and so the trio teamed up, but quickly found themselves still outmatched. Medusa used a piece of prototype technology to buy them some time by teleporting Antimatter to an unknown destination, which happened to be near the Moon. Deciding that they needed help from someone who was the "opposite of punching", the three were warped without warning by Singularity to Japan, unintentionally crashing the wedding of Nico Minoru's cousin. They quickly explained the situation as Antimatter arrived once more, only to be temporarily banished by the magic of Nico and her Staff of One.

They then demanded that Singularity explain herself and what she knew about the entity chasing her. As she told them about her time in another reality, they were interrupted by a call from Captain Marvel who had been monitoring the situation from the A.F.S.S. and described a plan devised by Dr. Tempest Bell to use Singularity as bait to lure Antimatter into a situation in which it could be bombarded with light particles in order to gather enough data to find the weakness of this new adversary.

Excitedly Singularity told them she knew someone who could help and the five women rendezvoused in Miami, Florida to seek the aid of Alison Blaire. Singularity rushed to greet Dazzler, only to be promptly dropped by a wicked right cross to the jaw. Alison's unexpected anger concerned Singularity, but there was little time to do more than explain the reason for their presence before Antimatter arrived yet again.

After a burst of light by Dazzler, She-Hulk and Medusa attempted to restrain Antimatter as Captain Marvel powered up a containment device, but the equipment failed when Antimatter overloaded the system and confronted them once more. Nico then used a spell to remove Antimatter's ability to track Singularity, and Little Blue protected her friends by enveloping them within herself and teleporting back to the A.F.S.S. with the other five women inside her.

Lt. Wendy Kawasaki then explained the data they'd gathered from the experiment in Miami and Dr. Bell indicated that she could create a machine which would dismantle Antimatter; however, there was quantum entanglement between him and Singularity, which meant his destruction would destroy Singularity as well.

After a particularly bad attack from Antimatter, Singularity transported all of them back to the Alpha Flight Station. There was a brief pause in the action before the team changed into space suits and went to fight Antimatter outside the space station. During the fight, Dazzler was hit by an energy blast, which killed her when it depressurized her space suit. Back on the A.F.S.S., Singularity blamed herself for being talked into staying behind, and asked Nico if she could resurrect Dazzler, but was told that was impossible. Saddened by the loss of life, Singularity then teleported to the Blue Area of the Moon alone, in order to confront Antimatter once and for all.She-Hulk, Nico, and Captain Marvel went to reinforce Singularity, while Medusa placed a Molecular Destabilizer Bomb inside Antimatter. When the bomb exploded, a revived Dazzler teleported in and whisked Singularity away just in time.

One of their following adventures took place in Astoria, Oregon, where they had to fight what appeared to be a dragon. During the confrontation, A-Force encountered Dazzler's displaced Thor counterpart, which helped the team defeat their adversary, but there were some complications and Dazzler Thor contracted M-Pox, succumbing to the effects of the Terrigen Mists.

This team remained together for some more time[13], but they eventually disbanded with Jennifer dropping superhero activities and Medusa going to space. In the meantime, Singularity went to a "non-place" outside of time for unknown reasons and, after being there for a while, she met Kamala Khan from Earth-616. Recognizing her due to having met her counterpart from Arcadia, she decided to return her to the proper time and space, soon bidding her farewell and disappearing
Superhero Class