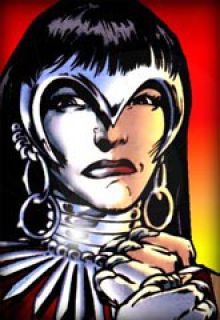 The Kamekeri are a small South American tribe located in Costa Verde. Originally part of the Tahuantinsuyu, they worshipped both the Incan and their own local gods until missionaries convinced them to reject their old beliefs for modern ways. However, Peliali, the Volcano Goddess, swore never to leave her home or her people. Though the Kamekeri kept in touch with the outside world the Costa Verde government officially learned of their existence only recently.

Years ago Jamie Santiago returned from one of many journeys into the Andes with an infant girl he claimed was his by Peliali. Revealed as a shape-shifter at her christening, Lupe grew up teased by other children. When her father died, Lupe was taken in by the Church orphanage, despite their misgivings about her “ungodly” powers. When a TV ad brought the orphanage a letter from Edwin Jarvis they decided to make Lupe his sponsor, believing that his connections to Iron Man might be able to help her someday. Lupe began a correspondence with Jarvis that lasted several years, though not revealing her birthright. Agents of Moses Magnum learned of her powers while traveling to America and forced her to fight the Avengers while they stole a seismic cannon being shipped through JFK Airport. Lupe cooperated on the condition that no hostages or bystanders were killed. Once Magnum Force escaped, Lupe, now called Silverclaw, helped the Avengers retrieve the cannon.

Lupe attended college classes until a telegram warned her of an old Costa Verde prophecy coming true. Once Silverclaw and the Avengers arrived they discovered that sorcerer Kulan Gath had transformed the Kamekeri into Hyborian Era (circa 10,000 B.C.) versions of themselves and was intending to sacrifice Peliali in order to attain godhood and destroy the Earth. The Avengers were able to distract Gath long enough for Silverclaw to channel the belief of the Kamekeri into Peliali allowing her to escape and leaving Gath to the mercy of his demonic masters.

Now an Avenger reservist, Silverclaw continued her studies while helping out against such foes as Ronan the Accuser, a homunculus of Estaban De Ablo, and Kang. When the Avengers helped Mantis save her son Sequoia from one of the Thanosi (renegade Thanos duplicates), Silverclaw was attracted to the extra-dimensional Haywire, but his obsession with reviving his dead girlfriend Inertia ultimately destroyed him. Silverclaw also aided the Avengers when an extra-dimensional madman tried to merge their universe with his own and when an insane Scarlet Witch attempted to destroy the Avengers.