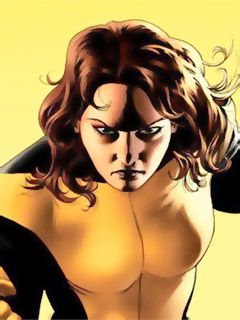 Shadowcat possessed the ability to pass through solid matter and objects by passing her atoms through the spaces between the atoms of the object through which she was moving. In this way she and the object through which she was passing could temporarily merge without interacting, and each was unharmed when Shadowcat had finished passing through the object. This process was called "phasing." When Shadowcat was phasing, she was, for all intents and purposes, intangible. Hence, when attacked, she could shift into a "phasing" state (even if she was not at the time passing through an object) so as to allow oncoming projectiles or energy blasts to pass through her harmlessly. Shadowcat passed through objects at the same rate of speed at which she was moving before she "entered" it. Following her serious injuries at the hands of the Marauders during the Mutant Massacre, Kitty's phased state became her natural state. She only remains solid by concentrating, and reverts to her phased state if that concentration is disrupted.

Allows others to become intangible and make other objects intangible by making them pass through other massive solid objects easily such as buildings, planes, and trains.

Allow elemental attacks to pass harmlessly through her such as water, fire, earth, air, energy, electricity, and even lightning.

Kitty can easily damage tangible matter by passing right through it.

Using her phasing/intangibility ability, Shadowcat can freely walk on both air and water. In fact, she could use her ability to walk on water and the air from the ground to the upper stories of a building as if she were climbing a staircase.

From the first use of her phasing power, Shadowcat was able to phase her clothing along with herself. Through practice she learned to phase other objects along with herself without harm to them, and at one point phased an entire X-Men team. She could also enable someone as big as Colossus to "walk on air" along with her. However, she had to maintain physical contact with the people or objects she phased along with herself for the effect to work with this other person or object.

Kitty can easily bend into the colors of her immediate surroundings and environments, practically making her invisible to anything seen to the naked eye.

Shadowcat can also become completely invisible and unseen in shadows.

She could phase through any material object, even living people. When she phased through an object with an electrical system, the process disrupted the system's workings.

Her thoughts were highly erratic when phased as if there was no mind to telepathically affect.

Kitty can hide herself and others from any type of optical eyesight.

Kitty is trained in ballet and modern dance. She continued to take dance training under the tutelage of Stevie Hunter, and was highly agile.

Shadowcat was an expert in the field of computer science, demonstrating genius-level aptitude for programming, modifying, and diagnosing almost any computer system: even those of unfamiliar human and extraterrestrial origin. She used her skills in many high-stress combat situations to great effect, and in combination with her mutant ability to disrupt electrical systems she was a formidable foe for any enemy relying on advanced technology. She was the equal and peer of her former hacking partner Cypher (deceased) whose mutant gift for languages granted him superhuman skill in the same field.

She speaks fluent Japanese, Russian, the royal and standard languages of the Shi'ar Imperium. She also has moderate expertise in Gaelic, Hebrew, German and Skrullos.