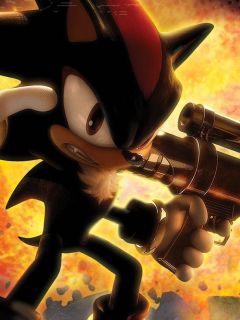 Shadow The Hedgehog's powers and abilities

Shadow is easily capable of matching Sonic's abilities in both speed and power.[14][15][16] Although he is not as strong as characters like Knuckles the Echidna, Shadow has superhuman strength; with effort, he can overturn large objects many times his weight and size such as trucks, buses and large slabs of concrete with one hand. Like other characters in the series, Shadow can also move at super speeds, an innate talent that members of the hedgehog species possess,[17] and can evenly match even Sonic's speed as well,[18][19] who can run at hypersonic speeds. While Shadow's Air Shoes are credited as the source of his speed,[20] his powerful body allows him to easily rival Sonic's world class speed as well.[21] While there is some inconsistency about how fast the two are compared to each other, it is usually stated that they are complete equals.

Shadow is extremely acrobatic, agile, and an experienced athlete[22] capable of gracefully leaping over any obstacles that head his way and performing various forms of nimble movements. He has radical reaction time to match his movements, being able to react to danger within a split second.

Shadow has incredible resilience to damage, being able to survive otherwise fatal situations even by the standards of superhuman creatures, making him nearly indestructible. He is impervious to bullets and can take a lot of major punishment in battle before he starts to wear down. The most prominent testament to his durability, however, was in Sonic Adventure 2 when Shadow survived his fall down to Earth from space and re-entry in the atmosphere before Eggman's robots rescued him. Despite surviving this, the experience left him with enough physical trauma to give him amnesia. Even after receiving major damage, Shadow displays a remarkably fast recovery rate, allowing him to quickly get back up in a matter of moments.

Shadow possesses tremendous willpower and unbreakable determination and, as a result, has absolute refusal to give up in any of his missions and never surrenders; he will see his goals to the end. His willpower allows him to keep on fighting when utterly exhausted, after taking an excessive amount of damage, or when he is severely outnumbered and outgunned. His will even lets him psychologically resist mind control powers. For example, Shadow was able to regain control from Black Doom despite him being part Black Arms and therefore susceptible to Black Doom's influence.

Shadow is naturally able to tap into the arcane powers of any nearby Chaos Emeralds to utilize their chaos energy to empower himself and can use a wide variety of Chaos Powers as well. He is able to use most of his Chaos Powers without a Chaos Emerald. Shadow can harness both positive and negative chaos energy, depending on his state of mind. His Chaos Powers are so potent that should he remove his restraints, he becomes a walking dynamo of raw power, releasing such tremendous amounts of innate energy that it forms an impenetrable barrier around him. While in this state, Shadow gains increased strength and speed,[23] enough to overpower hundreds of Mephiles the Dark clones at once. However, using his full power tires him out more quickly.[23]

Shadow's trademark Chaos Power is Chaos Control, and is possibly the most adept user of it in the series, having mastered it to perfection. With Chaos Control, he can manipulate space and time to slow down time and warp across space, and can use it delicately enough to distort space in small centralized areas, such as around his fists or in midair. Additionally, he can mold Chaos Control into a variety of offensive and defensive moves and can even use it to heal himself. It is unknown what Shadow's full limit for warping time and space with Chaos Control is, but it has been shown that he can warp objects and people with him all the way into space.

As described in Shadow the Hedgehog, all of Shadow's Chaos Powers increase in power with the number of Chaos Emeralds he possesses. Shadow did state in Sonic Battle that he is the only one who can use the true power of the Chaos Emeralds. Furthermore, he can draw power from the Emeralds without making physical contact.

In combat, Shadow is a lethal and extremely powerful force that very few can defeat. He never holds back his immense strength, making him a brutal fighter with a distinct killer instinct. Shadow's skills are more than a match for even the strongest in the series and has been able to take down some of the most fearsome foes of the series on his own, such as Black Doom. To best put his skills in perspective, as seen in some of the scenarios in Shadow the Hedgehog, Shadow is one of the very few individuals who has been able to defeat Sonic in combat, even when Sonic had the Diablon for support. Shadow even managed to best Emerl in combat, when he had all seven chaos emeralds, after Shadow gave him the last one.

Shadow's fighting style focuses on brutal, unrestrained and powerful hand-to-hand combat. In line with his nature and potent abilities, Shadow has adopted a fighting style where he fights his opponents using powerful blows, such as karate chops, swift punches and roundhouse kicks. With the speeds Shadow can move at, he can disable the opponent through the force of his blows alone, leaving them at the mercy of his incoming attacks.

Shadow's fighting style revolves around making heavy use of his Chaos Powers, especially Chaos Control and Chaos Spear. Using Chaos Control, Shadow can teleport up in front of or behind his opponents in battle to launch surprise attacks. Also, Shadow can use Chaos Control to increase the damage he deals to his opponent when striking them, often resulting in significant forces being released and blowing the opponent a certain distance away. Shadow will use these Chaos Powers and any other means necessary to overwhelm his opponents.

Like Sonic, Shadow's basic combat moves revolve around the various forms of the Spin Attack where he curls tightly into a concussive ball while in locomotion to damage, mow down, or burrow through obstacles and foes. The Homing Attack allows Shadow to dash in midair toward a target, the Spin Jump lets him curl into a ball and attack opponents by landing on them, and the Spin Dash lets him shoot himself forward as an acceleration roll at full speed while mowing down enemies and obstacles. He is also able perform the Boost where he turns himself into a highly destructive projectile by moving at high speed, though Shadow uses the fire from his Air Shoes to propel himself forward rather than skating like usual. The Light Speed Dash and Light Speed Attack also allows Shadow to achieve light speed movements for either exploration or combat.

A less frequent technique that Shadow uses is the Black Tornado, in which Shadow jumps into the air and creates a black whirlwind by circling a particular spot at high speeds, which can throw his opponents into the air or blow away armor and weapons. For more direct combat, Shadow has his Chaos Attack in which he deals a barrage of chaos energy-fueled strikes to his opponents, and his Spin Kick lets him create a small tornado that can suck in enemies to strike them.

Many of Shadow's signature techniques are Chaos Powers. His trademark move is Chaos Control which lets him manipulate time and space to either warp across space, slow down time, or distort space to form other types of Chaos Powers. His second most used Chaos Power is his Chaos Spear technique, in which he throws bolts of chaos energy at his opponent. However, his most powerful technique is Chaos Blast, in which Shadow releases a shockwave of chaos energy that eliminates everything within its range. Alternatively, he can focus it into a beam for more concentrated damage.

As seen during the second EX Grand Prix, Shadow is an expert Extreme Gear rider. During the tournament, he was able to put up quite a fight and even defeat some of the world's best Extreme Gear riders. When riding on an Extreme Gear, Shadow is skillful enough to ride on rails, execute complex tricks while in midair, and even perform his Chaos Powers and combat moves with ease. Also, Shadow may have some knowledge about machinery, being able to fiddle with a deactivated Omega and deduce he was in stand-by mode.

Shadow is not above using weaponry and equipment, and demonstrates proficient skills in a wide range of firearms, semi-automatics, heavy assault, and close-combat weapons. In addition, Shadow also has excellent skills when it comes to driving or piloting all forms of vehicles, from militaristic war machines to advanced racecars.