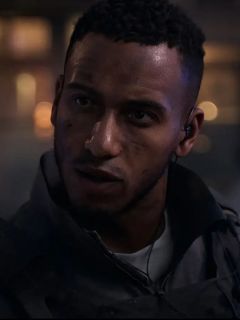 Kyle Garrick enlisted in the British Army in 2014, serving in the Duke of Lancaster's Regiment, spending four years participating in test flights, jump competition and marksmanship before passing selection for Her Majesty's elite Special Air Service (SAS), where he is currently serving as a sergeant for his sixth year. Tasked to Northern Ireland, Bosnia, Turkey, Iraq, Afghanistan, and Syria. Garrick has spent the better part of his career hunting terrorist fighters. Kyle earned the U.S. Marine Corps Gold Parachute Wings at Marine Corps Base Camp Lejeune in North Carolina whilst on an exchange attachment and routinely cross-loads on operations with the SAS' American counterparts, the Navy SEALs. Required to undergo resistance to interrogation (RTI) testing, Kyle was the only candidate in his class to escape the facility and evade capture. Routinely subjected to physically and mentally uncomfortable scenarios, Kyle prides himself on high tolerance and tactical awareness. "Everyone talks about the physical aspect of being in the SAS but my job is mostly mental. Give me a guy who's got his mindset right over a guy who's twice as fit any day of the week."

Sergeant Garrick was awarded the Queen's Gallantry Medal and the General Service Medal for both covert and overt counterterrorism operations in the Middle East, disrupting opium supply lines and poppy production, a major source of terrorist financing. Kyle's last Middle Eastern tour was cut short due to an ever-changing political climate and a growing intolerance for full-throated unconventional warfare. Fading support for western backed guerrilla movements as well as growing regional tension complicated matters in the field, as men like Kyle are asked to do an imperfect job, perfectly well, without exception, no matter the cost.

It is revealed at the end of Modern Warfare's campaign that Kyle was given the nickname, Gaz.

With the SAS notoriously shrouded in secrecy, Kyle explains— "We move in silence, do our job, and melt away. No publicity, no media. It takes stamina, willpower, guts and brains. Got those, we'll welcome you a try at being one of us. If you haven't got all that, then off with you..."

On October 25, 2019, Garrick was working with CTSFO tracking Al-Qatala terrorists at Picadilly Circus. After stepping out of their vehicle, Garrick and the CTSFO officers hold Al-Qatala insurgents at gunpoint before a bomb is detonated. Garrick and the CTSFO engage with AQ, clearing out train stations, book stores, and an arcade. Once these locations were clear, Garrick moved on the Tanto building, where he linked up with Captain John Price's Bravo Team shortly before making entry. Together, Price and Garrick moved through the ground floor before continuing to the second level. Once up there, they found a group of hostages with an explosive vest on one. Price and Garrick attempt to disarm the device, but find that they don't have enough time. Price shoves Garrick back before flipping the hostage over the railing, the vest detonating immediately afterward. After the threat had been neutralized, Price and Garrick discuss what had happened, after which Garrick was put on Bravo Team.

Two days after Picadilly, Garrick and Price lead a raid on a townhouse in Camden Town. They make entry and begin to clear the townhouse floor by floor, eliminating AQ fighters as they go. After clearing three floors, Garrick and Price move on to the attic, where they find a lone female. After giving her orders to surrender, she turns to a table, but she is killed by the two SAS operatives. Garrick discovers that she was going for a detonator, while Price finds intel on The Wolf's location.

The next night, Garrick and Price are flying to the United States Embassy in Urzikstan to retrieve The Wolf. On approach, their helicopter is shot down, but they are able to use a fast rope to bail out and land on the roof. They make their way to the ground floor, where Price tells Alex to move The Wolf to a safe room in the basement. They start to make their way there when Al-Qatala breaches the Embassy. Garrick and Price fight their way through AQ to get to the safe room, where they regroup with Alex, Farah, and Hadir. While in the panic room, they find that they need the Ambassador's keycard to escape. He uses security cameras and an intercom to talk to the Ambassador, but he is killed before Kyle can direct him to safety. Luckily, the Ambassador's assistant was hiding under his desk, and Garrick is able to direct her across the floor to Farah and Price, who escorts her to the basement. The group then makes their way to the Ambassador's residence, where they lock down The Wolf. The residence is then under siege, and the group attempts to defend. Garrick, Price, and Farah make their way to one rooftop while Alex and Hadir defend another. After repelling a wave of AQ, they come under fire from mortars and are forced off the roof. They defend against another wave of AQ, before Price calls Garrick over to one of the buildings to resupply. In there, Price gives Garrick a laser designator. They leave the building and make their way to its roof, where they defend against AQ snipers and RPGs from a construction site across the street. After defending against them, Garrick uses the designator to signal airstrikes on AQ reinforcements that are arriving by truck. Once the trucks are clear, Garrick assists Hadir in clearing a building where the mortars are being fired from. Once the house was clear, Hadir and Garrick made their way back to the embassy to find that AQ launched another attack and had breached the perimeter. They managed to get back inside the residence and cleared it, saving the Ambassador's assistant again, but they found that The Wolf had escaped during the fighting.

While Hadir, Farah, and Alex are covering the Crossroads, Garrick was with Price going door to door trying to find The Wolf and The Butcher. Later, he helps Alex leave the bunker after Hadir detonated the stolen gas against the Russians.

After finding where The Wolf was holed up, Garrick assaults the compound with Price, Farah, and Alex trying to find him, Hadir, and The Butcher. Garrick clears two buildings with Price and other SAS, finding more intel on AQ operations. After the second building was clear, they get intel from a woman about the entrance to a tunnel system in a tea house. After Alex and Farah go down the hole, a suicide bomber detonates their vest, collapsing the tunnel behind them. After the tunnel collapsed, Garrick worked with the rest of the SAS to secure the rest of the compound while Farah and Alex worked their way to The Wolf.

After Farah's forces were labeled as terrorists, Price and Garrick take an unsanctioned trip to Russia to find The Butcher. With the help of Nikolai, they find him in St. Petersburg. After getting weapons from Nikolai, Garrick and Price assault a warehouse AQ is using. They kill the sentries in the alleyway, and then inside as well. After clearing the building, they chase The Butcher through the streets of St. Petersburg. The chase ends when Nikolai hits The Butcher with his van. They load The Butcher in the van, but it has trouble starting. Garrick fends of AQ fighters swarming the van before it finally starts, allowing them to escape. They go to a warehouse, where they work on interrogating The Butcher. After The Butcher taunts Price and Garrick, Price sends the Sergeant to retrieve a package Nikolai brought. Garrick opens the back of Nikolai's van to find a woman and a child. He brings them back to the room, where Price steps out and offers Garrick a choice.

Garrick decides to not participate in the interrogation and waits for Price and Yegor to finish.

Garrick decides to participate in the interrogation and forces the woman and boy inside. It is revealed that they are The Butcher's family. Price gives Garrick a revolver, which he uses to intimidate The Butcher. When Garrick pulls the trigger, he discovers that the gun isn't loaded. Price then gives Garrick bullets, and grabs The Butcher's son. Now that the gun is loaded, The Butcher tells Price where the rest of the stolen gas is. When asked about Hadir, The Butcher says it is too late and that Barkov will be dead. Price leaves the room, knowing where the gas and Hadir are, leaving Garrick for a minute. Garrick either leaves, wounds, or kills The Butcher before leaving.

Garrick and Price travel to Barkov's estate, where they find Al-Qatala have already killed the guards and taken over. Garrick infiltrates the grounds with Price on overwatch, and he goes around the estate looking for hostages. He goes to the poolhouse, the clocktower, and a church. At the third location, he discovers that the hostage broke and gave up information on Barkov, a room in the main building and the code to access it. Garrick makes his way there, meeting Price outside the room. They enter the room to find Hadir there, and they capture him, taking intel on the factory that makes Barkov's gas. As they take Hadir, a helicopter opens fire on the house, destroying the room. After the helicopter stops firing, Garrick and Price escort Hadir out of the house and to a tunnel that leads away from the estate. Before leaving, Laswell arrives and orders Garrick and Price to give her Hadir, after which he is given to the Russians.

Garrick and Price travel back to Urzikstan and recruit Farah and Alex. After they are done, they assault the factory, clearing out Barkov's forces on the way. Garrick and Price split from the rest of the group and fight their way to the pipelines that supply the factory, setting charges on them before leaving the factory.

After the destruction of the factory in Georgia, Price works with General Shepherd and Laswell to form Task Force 141, which Garrick, now known as Gaz, is recruited to.

After Al-Qatala released toxic gas within Verdansk, the situation escalated with the discovery of bunkers used to store Al-Qatala weapons. Captain Price later conducts an operation in the city alongside Garrick, intent on preventing the situation from becoming any more chaotic.
Superhero Class