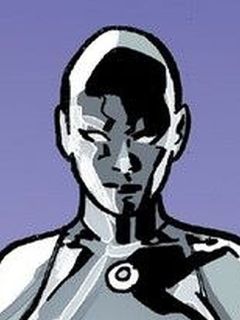 Child of the Vault

Serafina is a valuable member of the Children of the Vault, an advanced society developed in hold of a ship subjected to temporal acceleration in Peru. In thirty years that passed on Earth, the humans trapped inside the "Vault" lived for 6,000 years, integrating their evolutionary process with technology and becoming post-humans. As an artificially augmented post-human, Serafina has a great affinity with machines. Their time capsule had been set to open after a global catastrophe eliminated humanity, as such, the Children of the Vault see themselves as the inheritors of Earth. However, the chaos unleashed during M-Day, anticipated their activation. Considering themselves a different species from both humans and mutants, the Children of the Vault decided to eliminate both secretly.

However, the mutant Sabretooth witnessed their awakening, immediately becoming a target to the Children. Alongside her fellow Child Sangre, Serafina tracked Sabretooth to Nogales, Mexico, where she detonated a singularity bomb. In order to cause a distraction, Serafina spared the life of a young girl but not before brainwashing her into believing the terrorists were Sabretooth's allies, the X-Men. In order to prevent Sabretooth and the X-Men from sharing their knowledge about the Children of the Vault's existence, Serafina manipulated Northstar and Aurora into attacking the Xavier Institute.

As their lackeys failed in their mission due to the intervention of Cable, Serafina infiltrated the institute herself, where she became interested in the X-Man Cannonball. Using the comatose Lady Mastermind's illusion abilities, Serafina created a world in which she was married to Cannonball under the name "Sarah" only to torment him. Cannonball eventually caught on to the unrealism of the world after Serafina was intercepted by Wolverine. She easily disposed of him by turning his Adamantium skeleton against him by poisoning it. After she defeated Cannonball, she escaped the X-Mansion to return with her teammates.

Serafina's failure led the upset Children to launch an all-out attack on the superheroes. The X-Men took the fight to them by assembling a new team led by Rogue, sent to foil the Children's plans to destroy the Xavier Institute. In the battle, Serafina was able to easily manipulate and defeat the Omega Sentinel Karima Shapandar and Sabretooth, who had Nano-Sentinels in his blood, through her technopathic powers. However, when Cannonball uselessly tried to reach through to her based on the illusory life they had shared, she expressed she had no true feelings for him. Blasting around the Conquistador ship, Cannonball drove her into its hull at full force, leaving her seemingly lifeless body behind.

Serafina, after being upgraded to become a second level Child by the City, was captured by Orchis at an unknown period in time and through unknown means in order to serve them as a weapon. She was accidentally freed during the X-Men's raid on the Orchis Hub and immediately ran away after being recognized. She fled to the Vault built within the ruins of the Wild Sentinel Factory, being able to vanish before Wolverine could aprehend her. Professor X and Cyclops sent the new Wolverine, Synch, and Darwin to infiltrate the Vault and collect intel about the Children of the Vault, but lost contact with the trio.

For more than five hundred years, the three X-Men battled the Children of the Vault in their City. Serafina was resurrected and further enhanced by the City as a third-generation of the Children. She was approached by Wolverine and Synch, so Synch could copy her powers to find a captured Darwin. Although Synch managed to ultimately break free from the Vault, the Children of the Vault had access to Darwin's adaptive mutant powers, which would allow them to become fourth-generation post-humans.
Superhero Class