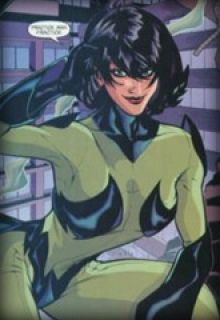 Elaine Coll is not a nice person. She is not mentally stable, and in actuality, she has a mean streak running through her that would make the most hardened criminals shiver. She was part of the Hell's Kitchen Mob when the Maggia crime lord, Silvermane, offered her an alliance between the "families". The Hell's Kitchen and Maggia organizations were usually enemies, but Silvermane sweetened the deal. He had his engineers upgrade the suit of the then retired Scorpion, and gave it to Elaine. She dubbed herself Scorpia, and she was more than willing to do Silvermane's bidding as long as the Hell's Kitchen gang got their piece of the city after the smoke had cleared.

Working with Silvermane’s other operatives, Speed Demon, Hydro-Man, Beetle, and Boomerang, she sought out the cyborg Deathlok in order to retrieve him for her Maggia ally. The first assault on Deathlok may have been successful if not for the interference of Spider-Man. The two heroes managed to drive their enemies away only to learn that Silvermane gained control over the city's computer systems, and he would only release his hold once he had Deathlok's body for himself. Deathlok surrendered himself to Silvermane in hopes that the city would be spared from any further disasters, but Spider-Man would not allow Silvermane to get possession of Deathlok's body so easily. Spider-Man found another ally in Daredevil and the two of them tracked Deathlok to Silvermane's hideout.

Surveillance cameras alerted the Maggia to the intruders, and Scorpia was more than willing to bring the fight to them. As she attacked, Daredevil immediately recognized her. He remembered that she tortured and killed two policemen while singing and was committed to the psycho ward at Bellevue Hospital, but she was released due to the fact that she was supposedly completely rehabilitated. Scorpia seemed to be more than a match for the two heroes, but she was defeated when Silvermane, now in control of Deathlok's body, shot her from behind in order to gain his enemies trust. Enraged at Silvermane's betrayal, Scorpia set out to find him so that she could even the score. Stalking Spider-Man and Daredevil, so that they would lead her right to Silvermane, Scorpia only had a brief moment to attack before her armor was taken control of by Mainframe. However, once Mainframe was defeated by Daredevil, she was free to act out her revenge. She never got her chance to get Silvermane because the Punisher arrived and severely damaged a plasma reactor inside the military installation where the fighting took place. As Deathlok and Spider-Man shut down the reactor, Scorpia escaped.