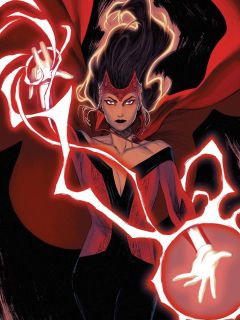 Wanda's main power is the superhuman ability to manipulate and warp reality at will, by manipulating Chaos Magic, granted to her by the High Evolutionary's experimentation's and further amplified by the demon Chthon (imprisoned within Wundagore Mountain) when she was born. Her hexes were, by extension, simple, indirect manifestations of this magic, destabilizing probabilities by affecting energy fields and matter, ultimately inducing chaos. While she's acting as a conduit for the planet's life force, her powers is further amplified and not always under her conscious control, and their effects persisted even after Dr. Strange's Eye of Agamotto shut down her mind. Even the combined efforts of the Sorcerer Supreme and Earth's most formidable psychic mind were unable to fully inhibit such effects for long.

While Wanda is stable and healthy, she wields her powers with proficiency and is capable of triggering and controlling multiple occurrences at once; one of her most famous feats was reviving Wonder Man seemingly from another plane of existence. While she served as a conduit for the Earth's life force, her power was so great that she was able to generate armies from nowhere and has also altered the entire Earth-616 reality at will, and permanently shifted the nature of all possible futures without realizing what she had done (although some of her victims have claimed to be able to discern the difference between reality and her spells). Wanda was also shown to easily wipe any in her own illusory reality from existence with but a thought. In the HoM reality that she created, her chaos wave was so powerful that even Meggan, who absorbed the power of beyonders, only could stop it for a few seconds. Wanda even cast one spell that caused the loss of most of the mutant population (around three hundred powered mutants left)[67] through the deletion of the Mutant Genome created by the near-omnipotent Celestials on a multiversal scale. It was revealed by Doctor Strange to Beast that this lasting spell was of such complexity and strength that it had woven itself into reality and the world of magic itself, and that if he were to even to try to reverse it, all of reality would implode. Wanda was even able of heal the severely damaged legs of Charles Xavier while all his Earth and alien friends, allies and colleagues' efforts (including even giving Xavier a new body) apparently failed for countless years.

She is actually considered the very Nexus Being of the central universe of Earth-616, serving as the entity that personifies the realm's character and serves as the focal point or anchor of that reality. (Uatu described a nexus-being as one of the "rare individual entities with the power to affect probabilities-and thus the future"), making her along the scales of class and power as the other known nexus-beings.

The nature of Wanda's ability to channel and wield magical energy has been altered many times by different writers. It was initially brought about by the demonic sorcerer Chthon. On the day that Wanda was born, the ghostly specter of Chthon visited the newborn Wanda and "blessed" Wanda so that Wanda could channel the dangerous Chaos Magic that was the basis for Chthon's unholy might. Chthon's intentions were to create a vessel that he could possess one day, when Wanda was a full-grown adult, though his schemes to do so were foiled by the Avengers.

As such, due to Chthon's "blessing", Wanda is also vulnerable to having all of her powers disabled if Chthon is ever disrupted. During the period in which pages from Chthon's sacred tome, the Darkhold, were scattered across the globe, Wanda's powers were periodically disabled -- with her being left powerless in several dangerous battles against various super-villains -- until several of the missing pages were restored to the book. Although this particular plot thread was stated by Agatha Harkness who was reanimated by Wanda. How much of it is true and how much of it is more unconscious manifestations of the Scarlet Witch's reality manipulation is debatable.

Wanda's power to alter reality itself was spawned from the combination of her abilities to affect probability and Chaos Magic. It must also be noted that the Scarlet Witch is responsible for the resurrection of Mad Jim Jaspers which happened when her powers altered reality. As such, she may possibly be on par with the White Phoenix of the Crown. Because of her ability to warp reality, Wanda is one of the most powerful Marvel beings.

Initially, Wanda had the ability to manipulate probability via her "hexes" (often manifesting physically as "hex spheres" or "hex bolts") which manipulated energy fields and matter to varying degrees. These hexes were initially short range, and are limited to her line of sight. Casting a hex would initially require a gesture and concentration on her part, though the gestures are largely a focus for the concentration. Early in her career, her hexes were unconscious, and would be automatically triggered whenever she made a particular gesture, regardless of her intent. These hexes would only manifest as "bad luck", triggering negative effects. She later gained enough control over her powers that they only work when she wants them to, and they are not limited to negative effects.

Wanda can use her hexes to cause a wide variety of phenomena such as spontaneous combustion, rapid decay/healing, molecular destabilization, energy control/transference/disruption/amplification/transmutation as well as inertia redirection/amplification/disruption/transference. These effects have lit flammable objects, contained and removed air from a particular volume, stopped the momentum of projectiles, block/unlock/closed/opened doors or technological devices, exploded objects, created force fields, deflected normal and magical attacks, negated or distorted physical laws, altered/affect/control matter, molecular composition and physical state of physical objects, and caused various forms of energy to spontaneously appear or disappear- to list only a few feats.

Her powers, while beginning to unveil a higher potential appeared capable of prevailing against the mastered mystical ones of Dormammu in his own Dark Dimension when she and the Avengers fought against him for Avalon's Evil Eye power-object, albeit indirectly by disrupting the energies of Dormammu and the Eye. She has an affinity with natural elements and phenomena, stemming largely from her magical training under Agatha Harkness, and has trained often at using her hexes to deflect projectiles or to cause enemies to stumble or otherwise suffer the effects of "bad luck". This makes her one of the few Avengers that Ultron fears; his adamantium shell cannot repel magic. She has also displayed the ability to cancel Longshot and Domino's powers of probability and has also once turned Longshot into a cat. Wanda can also project very powerful blasts, orbs, waves and beams of hex energy. This can destroy or hit objects or people with a great force, as well as, generate energy constructions such as force fields or screens.

Wanda has portrayed the ability to teleport her and others over long distances or open portal and gates for different purposes. The full extent to this ability is unknown.

Wanda has portrayed the ability to manipulate, propel and levitate things using her mind as well as fly or hover. The full extent to this ability is unknown.

Wanda was trained by Agatha Harkness in witchcraft. Her sorceress training has not given her a set of powers separate from her mutant abilities, but only honed her control over her existing abilities. She has, however, a special affinity for the natural elements and materials that witches utilize in their spells: the four alchemical elements, wood, organic substances, etc.

She has also been trained in hand-to-hand combat by both Captain America and Hawkeye.