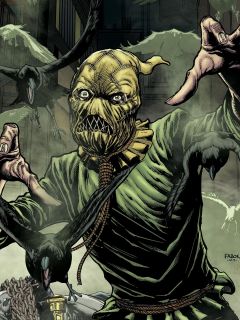 Jonathan Crane often found himself the target of bullies who dubbed him "Scarecrow" with his gangling legs and gawkish features, Washington Irving's fictional Ichabod Crane made real. Fear of his oppressors defined the young Crane, who vowed to conquer his weaknesses by knowing the nature of all phobias, and in doing so, avenge himself upon all who taunted him.

Later, Crane studied psychology and biochemistry, parlaying his advanced knowledge of fear and the human mind into a Gotham University professorship. Crane's unorthodox and unsafe teaching methods would ultimately be his undoing, forcing his dismissal. As revenge, Crane adopted the rags and tatters of the Scarecrow, literally frightening several of the University's regents to death with a specialized fear gas which made each man's personal demons all too real.

The Batman ended Crane's reign of terror, and subsequent criminal endeavors, but gained a bizarre new addition to his rogue's gallery in Arkham Asylum--a psychopath whose only fear is of the Dark Knight himself.