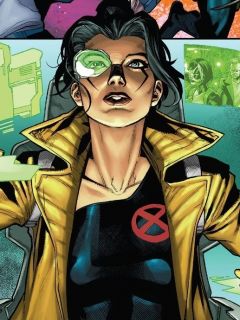 Little is known of the life of the woman known as Sage except that she had lived in a small village in the Balkan region of Europe whilst still a young girl, and that she had spent time in a harem under unrevealed circumstances. Just prior to her teenage years, Sage found herself caught up in the Russian invasion of Afghanistan. She was forced to learn to fight to survive encounters with both soldiers and local bandits, and took weapons and equipment from the bodies of fallen combatants. One day, Sage felt herself compelled to enter a cave in the nearby Hindu Kush mountain range. There, she found the powerful telepathic mutant named Charles Xavier, who had been trapped under a massive stone block by the alien being named Lucifer. Initially wary of him, Sage rescued the critically injured mutant but soon after they encountered a United Nations aid convoy being attacked by bandits. Sage drove off the attackers and then avenged the death of one young U.N. worker by brutally murdering the bandit that had raped and killed her.

Years later, Xavier recruited Sage at the same time that he formed his original team of teenage mutant students he called the X-Men. Xavier kept Sage's presence at his mansion a secret as he intended to utilize her own mutant talents as a spy in his fight for peaceful coexistence between mutants and humans. Sage's first mission was to infiltrate the organization for the rich and powerful known as the Hellfire Club and to gain the trust of Sebastian Shaw, leader of the Club's Inner Circle at its New York branch. For years, Sage acted as Shaw's familiar, advising and counseling him in both his legitimate and illegal business practices, all the while gathering information for Xavier. Shaw found Sage's ability to function as a living computer invaluable and kept her in his employ for many years, even during the time he was deposed as leader of the Club.

Early in Sage’s time with the Club, its renegade White Bishop, Donald Pierce, attempted a coup of the Club's leadership. Pierce kidnapped Sage, believing that without her Shaw's position could more easily be compromised. She was rescued by Xavier and his team of New Mutants and, upon her return to the Club, Pierce was expelled.

Later, Sage ran afoul of one of the Club’s regular and valued patrons, a reclusive billionaire named Elias Bogan. Shaw had made a wager with Bogan during a game of cards whereupon if Shaw lost, Bogan would win the Club's then-White Queen, the telepathic mutant Emma Frost. Bogan had never lost a game before, but with Sage’s help Shaw won the bet. Bogan honored the wager, but knew who was truly responsible for his defeat and exacted his revenge on Sage, capturing her and branding her face with facial tattoos. Rescued by the X-Man Storm, Sage soon affiliated herself with the X-Men, acting as part of their support crew. In order to shield herself from detection by Bogan, Sage consciously shut down her telepathic abilities, relying solely on her computer-like mind to assist her new teammates.

When Senator Robert Kelly announced his intention to run for the Presidency on an anti-mutant platform, Sage met with him to persuade him otherwise by convincing him that his actions were no different to those of the mutant terrorist Magneto. Kelly was not so easily swayed, however, and it wasn’t until a mutant sacrificed his life to save Kelly that he realized his folly.

Storm soon recruited her into a splinter group of X-Treme X-Men who set out to search for the diaries of the blind mutant seer named Destiny that predicted the future of mutantkind. On the new team's first mission, Sage was instrumental in saving the life of her teammate the Beast after an encounter with the self-professed enhanced human named Vargas. Sage used a heretofore-unseen ability to advance the Beast's evolution to its next stage, healing him of his injuries and activating his latent Secondary Mutation.

Eventually learning of Sage's deception, Shaw allied himself with Lady Mastermind, the daughter of former Hellfire Club member Mastermind (Jason Wyngarde), to exact revenge on his former assistant. Lady Mastermind trapped Sage in a convincing illusion, making her believe that she was once again Shaw's assistant back in the Hellfire Club. Sage was freed thanks to the efforts of Heather Cameron, an Australian mutant with the ability to manifest various super-human powers depending on what the current situation called for, and the X-Men defeated Shaw once more.

Sage later catalyzed the latent mutant powers of Heather’s brother Davis, who subsequently joined the X-Treme X-Men as Slipstream, as well as evolving her teammate Rogue's mutant ability to grant her control over the manifestation of the powers and abilities she has absorbed over the years.

Sage often used her computer-like mind to assist her teammate Bishop in his activities as a homicide detective, such as when they were called upon to investigate the attempted murder of Emma Frost, now a member of the X-Men and an instructor at Xavier’s school.

Later, when the X-Treme team encountered Elias Bogan once more after a murder at his Alaskan estate, Sage and Bishop were called in to investigate. A young mutant named Jeffrey Garrett was wanted for questioning after Bogan had his family killed and, in retaliation, he teleported Bogan's associates onto the nearby glacier where they froze to death. Garrett fled to the Xavier Institute where he came under the protection of Frost. However, Bogan had secretly possessed the young boy and when Frost scanned his mind, Bogan took possession of her. Sage and Bishop followed the trail to the mansion where Bogan captured them, but the timely arrival of Storm allowed them to escape and defeat the villain.

Bogan returned to plague the X-Treme X-Men soon after when he captured and mentally enslaved Bishop, hoping to use him as a weapon against his teammates. With the aid of several of their former allies the X-Men were able to rescue Bishop, which allowed Sage to defeat Bogan once and for all. Sage then accompanied her teammates back to New York to assist in the rebuilding of the mansion following an attack by Magneto, after which they rejoined the core X-Men team.

Recently, Sage has joined a new incarnation of the British super-team Excalibur. It appears that she had recently become romantically involved on some level with Pete Wisdom.
Superhero Class