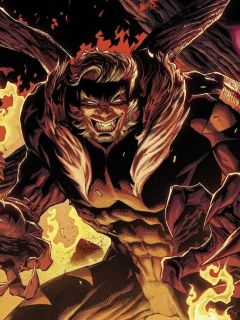 Sabretooth is a mutant who has been given an unbreakable skeleton, yet was easily broken at least once by Jean Grey's telekinesis, and augmented by the Weapon X Program.

Sabretooth's primary mutant power is an accelerated healing process that enables him to regenerate damaged or destroyed areas of his anatomy with far greater efficiency than an ordinary human. After some artificial upgrades by the Weapon X Program, Sabretooth can now fully heal from injuries that result in massive tissue damage or loss such as multiple gunshot wounds, slashes, puncture wounds, blunt force trauma, and severe burns within a matter of moments. Sabretooth's healing factor is nearly as powerful as Wolverine's, even possibly on par with it.

Sabretooth's natural healing also affords him the virtual immunity to poisons and most drugs. It is virtually impossible for him to become intoxicated.

Sabretooth's healing powers also extend to his highly efficient immune system. As a result, he is immune to the effects of all known Earthly diseases and infections.

In addition, Sabretooth's healing factor provides him with an extended lifespan by slowing the effects of the aging process. He has claimed to be even older than Wolverine. Despite being of an, unknown, advanced age, Sabretooth retains the appearance and vitality of a man in his physical prime.

Sabretooth is able to withstand incredibly cold temperatures without sustaining bodily damage for great periods of time, even to the point of sleeping in sub-zero temperatures.

Sabretooth's advanced musculature produces considerably less fatigue toxins during physical activity than an ordinary human, due in large part to the effects of his mutant healing factor. Due to the upgrades, Sabretooth can now physically exert himself at peak capacity for at least 24 hours before the build up of fatigue toxins began to impair him. His lung capacity is at peak human level enabling him to hold breath for 6 minutes under water, making his lungs as healthy as human's lungs can get. And when his lungs stop working，he can maintain his life by cutaneous respiration （It can only maintain his basic life activities).

Because of his healing factor, Sabretooth is able to push his muscles to a much greater extent than ordinary human without sustaining injury, granting him some degree of superhuman strength. While the full limits of his strength are unknown, the latest Wolverine handbook confirms Sabretooth as being stronger than Wolverine, as he is able to lift between 2-10 tons.

Sabretooth possess superhuman durability. This is mostly because of his healing abilities and Adamantium Skeleton, which redistributes the force of blows dealt against. He has taken blows from Wolverine on multiple occasions although showing moderate discomfort.

Sabretooth is able to move at low level superhuman speeds. He has the ability to attack faster than the eye can follow and can even keep up with Wolverine easily. His combat speed seems more enhanced then anything else, as he has frequently kept up with other enemies in combat, and blitzed people before they pull their trigger fingers. His speed is slightly increased further when he runs on all fours, similar to a jungle cat.

Sabretooth's agility, balance, and bodily coordination are enhanced to levels beyond the human body's natural limits, even those of the finest human athlete. His agility is sufficient to allow him to dodge multiple bullets. Other times, able to jump extremely high and evade several yards.

Sabretooth's reflexes are similarly enhanced and were superior to those of the finest human athlete and are equal to the likes of Wolverine due to his superhumanly acute senses, although most of the time he relies highly on his regenerative healing factor.

Sabretooth's feral mutation provides him superhumanly acute senses. Sabretooth can see with greater clarity and greater distances than an ordinary human. His vision extends into the ultraviolet and infrared areas of the electromagnetic spectrum, allowing him to see in near-total darkness and retain the same level of clarity. Sabretooth's hearing is similarly enhanced, able to detect sounds that ordinary human's can't and at greater distances. For example, he can detect the sound of light, normal breathing within a distance of 200 feet. Sabretooth also possesses an extremely well developed sense of smell. Sabretooth can recognize or track targets by scent, much the same way as a dog or wolf does. His nose can detect minute chemical differences in the scents of different deodorant brands, even if they were purported to be exactly the same scent.

Sabretooth has large canine teeth, akin to a big cat which are much larger than a normal human's canine teeth. Most of his teeth are large and sharper than a normal human's, but it is his pronounced upper and lower canines from which he gets his name that are truly animal teeth. He also has 20 retractable 3" talons in place of finger & toenails. The claws are naturally sharp and tougher than that of normal human bone structure, allowing Sabretooth to cut through most types of flesh and natural materials. Sabretooth's ability to slice completely through a substance depends on the thickness of the substance and the amount of force he can exert.

Sabretooth became temporarily immune to telepathic manipulation after an incident where Wolverine punctured his frontal lobe. When Elizabeth Braddock stabbed him with her psi-blade it seemingly had no effect in the sense that it should have reverted him via what he called "The Glow", which normally allowed his more reasonable side to take control over the animal, which failed. For at least a time afterward he became far more difficult to locate or read via telepathy, though this was shown to be a temporary resistance as both Jean Grey and Professor Xavier were able to eventually both locate, sense and enter his mind.

Sabretooth is an excellent hand to hand combatant, having been trained by various organizations such as the CIA, Weapon X, the Foreigner, and Hydra.

He is also an expert hunter and tracker, even without the use of his heightened senses.

Although his brutish nature coupled with extreme arrogance gives him the appearance of stupidity, Creed is actually quite intelligent. He routinely hacked into government databases to steal classified information and has escaped the highest levels of incarceration. More than once he has proven himself capable in the brain over brawn aspect, able to doop the likes of Logan into playing step by step into his ploy's, besting super geniuses such as the likes Sinister and his creations.

being a skilled shooter with just about any kind of firearm he can get his hands on.

Another note to his intelligence is that creed excels at scheming planning and coaxing other into doing his dirty work for him. Often even tricking people to accomplish goals for achieving his own ends.

Having spent well over a century working for one covert society to the next "officially unsanctioned" government installation. Sabretooth has amassed an impressive conglomerate of knowledge & awareness of countless surreptitious interested powers and their near countless tactics regarding assassination techniques, weapons specialty, vehicles, explosives, espionage, intelligence, black bag Ops, infiltration, the works.

He also has a pronounced assault leap, which few can sense, even those like Wolverine who have animal senses. This leap is a combination of his superhuman strength, reflexes and agility working in concert, flexing and un-flexing his muscles much harder and quicker than a normal human, similar to a tiger or lion's pounce. This allows for a devastatingly powerful and fast leap onto the opponent, which few can recover from.