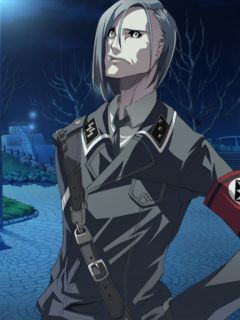 Spinne is notable among the Longinus Dreizehn Orden because of his low combat prowess. Given his Ahnenerbe's, Warsaw Ghetto, shallow history, his capacity to store souls is insanely low, not going much beyond 100-200 souls. Due to his overly worldly nature, his mastery over Ewigkeit is seriously hampered, as he can't use the Briah degree, Yetzirah being his maximum. This problem is also shared by his comrade Riza Brenner. Masada himself has stated that Spinne is the weakest member of the Longinus Thirteen. His spiritual armor is of extremely poor composition, and his physical capabilities are still the worst amongst the LDO, despite still being beyond what normal humans should be able to manage.

However, such worldly nature helps Spinne exceed in a field his peers possibly couldn't: that of moving around in modern society. Unlike the other Fangs of the Beast, who consider the 60 year gap they were given after the fall of Berlin and the beginning of the Transmutation of Gold at Suwahara City, Spinne thoroughly enjoyed and reveled in it.

Thanks to his experience as a concentration camp overseer, Spinne is adept at managing utterly mundane stuff, such as money and business, being the manager of Suwahara's strong medical industry for decades on end, as well as keeping track of the LDO's finances and money. Not only that, but he is also skilled at gathering undisclosed information that most people would have absolutely no means to gain access to, being able to get Ludwig van Rosenkranz's entire history, despite his status as one of the foremost secret operatives of the Vatican, managing to obtain Claudia Jerusalem's medical history, as well as being able to gain information that confirmed Valeria Trifa's suspicions regarding Kasumi Ayase's ancestry. His experience in Warsaw's concentration camp have also turned him into an expert negotiator.

As a former scientist, one who used to experiment with the prisoners in his charge, Spinne has skills in multiple science branches. Particularly, due to his masterminding of Project Sarastro, he seems to have expertise in the field of cloning, being capable of creating copies of Zarathustra out of mere somatic cells, with the same physical traits the original had (before gaining access to Ewigkeit, at least). However, this project was deemed useless, given the spontaneous necrosis the cloned somatic cells suffered.

Another one of Spinne's projects involved investigation on a rare species of spider, one that could synthethise venom capable of controlling their victim's mind, via interfering with their nervous system. Thanks to this venom, the victims could become just akin to puppets enthralled by a single will, as if they were just an insect swarm.

Spinne was noted to have countless backup plans to fall on, aside from these ones.

While using the first degree of Ewigkeit, Spinne is capable of manifesting his Ahnenerbe, Warsaw Ghetto, as incredibly thin wire stending from his fingers. Despite this tool's original use being to strangle people to death, Spinne mostly uses it to chop people into pieces, its sharpness being enough to easily turn grown humans into mincemeat. It can be arranged as a spider web to trap victims in, as well as be used as barrier around Spinne's body, shielding it from incoming attacks.

The full materialization of Spinne's Ahnenerbe, manifesting as wire stretching from his fingers. Unlike what appearences may suggest, Warsaw Ghetto manifests as a Fusion Type Ahnenerbe. The wire itself is much stronger than it was in the Assiah degree, being able to easily overwhelm Ren Fujii, who still could only use Ewigkeit at its lowest degree, via making Spinne totally impervious to his attacks, as well as trapping him in his web.

However, the defensive potential of this Holy Relic has a massive, glaring flaw: if confronted with an attack with the potential to destroy it, it will instantly kill Spinne due to Ewigkeit's symbiotic bond between Ahnenerbe and its Apostle. Therefore, when confronted with a blow from Ren's Guillotine, Warsaw Ghetto crumbled, and Spinne was left in the verge of death.