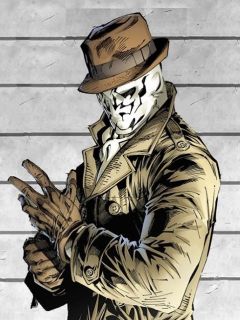 Rorschach (pronounced Roar-shack) is the vigilante name of Walter Joseph Kovacs; he was born March 21, 1940. His mother, a prostitute who resented his interference in her business, abused him viciously. His father never knew his son and nothing is known about him other then he liked President Truman and his name was "Charlie". At age 10, Walter attacked two bullies that had cruelly abused him, partially blinding one with the bully's own lit cigarette. Kovacs became a ward of the state and was sent to the Lillian Charlton Home for Problem Children. In high school, he excelled in religious education and literature, as well as in boxing and gymnastics. He also wrote an essay in which he praised President Truman's decision to use nuclear weapons against the Japanese cities of Hiroshima and Nagasaki, asserting that the bombs helped save lives by stopping the war.

During those high school years, at age 16, Walter was informed of his mother's gruesome murder; her pimp force-fed her a bottle of Drano until she died in agony. Walter's reaction consisted of only a single word: "Good."

At about the same time, he found work as an unskilled garment worker; noting later to a prison psychiatrist "Job bearable but unpleasant. Had to handle female clothing". Working in this capacity, in 1962 he grew fascinated by a new fabric made possible through technologies developed by Doctor Manhattan. Two viscous liquids, one black and one white, between two layers of latex, continually shifted in response to heat and pressure, forming symmetrical patterns like a Rorschach inkblot test while never mixing to produce a grey colour. Kovacs learned of the fabric when a young woman chose not to buy a dress which she had ordered made from it; subsequently Kovacs took the dress home and experimented with the fabric. He learned to cut the fabric and maintain the seal using heated scissors.

The real life 1964 murder of Kitty Genovese (in front of a building full of tenants who didn't bother to help her) was made part of the Watchmen universe backstory, providing a trigger for Kovacs's decision to avenge the powerless victims of crime. He decided that Genovese had been the woman who had ordered the dress ("Young. Pretty. Italian name. I'm sure it was her"), cut up the dress, and made it into a mask -- becoming Rorschach (taking his name from the test).

Eventually, in 1965 he teamed up with another superhero, the second Nite Owl, whose technical skills and resources complemented Kovacs' skills as an investigator.

In 1975, Rorschach was searching for a kidnapped child and found her captor's vacant hideout. A cursory inspection revealed, to his horror, that the girl had been murdered, butchered, and fed to two German Shepherd dogs. In the face of this atrocity, Kovacs' mind snapped and assumed the mental identity of Rorschach as a separate personality. He killed the dogs with a meat cleaver and waited for the kidnapper. Kovacs later mentioned, "shock of impact ran along my arm. It was Kovacs who said 'mother' then, muffled under Latex. It was Kovacs who closed his eyes. It was Rorschach who opened them again." When the man returned, he wordlessly chained him to a pipe, ignoring his claims of innocence (the man telling Rorschach: "Y-you can't prove anything. I mean, wh-where's the evidence", suggesting that he fed the girl to the dogs to get rid of the 'evidence'), then placed a hacksaw near him and set the house on fire. Finally speaking, he told the terrified man that he would not have time to cut through his restraints before the fire killed him (implying that he would have to sever his own arm to escape). Kovacs calmly watched the structure burn from across the street; the suspected kidnapper did not emerge. In an interview ten years later with psychologist Malcolm Long, Kovacs explicitly mentioned the incident as the point after which he became "Rorschach, who sometimes pretends to be Kovacs"; before that, he claims, he was only "Kovacs pretending to be Rorschach." He no longer refers to his "mask"; now he only calls the mask his "face".

After the 1977 Keene Act outlawed costumed vigilantes, demanding his retirement, he grew even more violent, murdering notorious multiple rapist Harvey Charles Furniss and leaving his corpse in front of a police station; a note pinned to his chest read, "Never!" True to his word, Rorschach remained an active "adventurer" in open defiance of the law.

Rorschach lives in a slum run by a landlady who has had multiple children by multiple fathers; he pointedly comments on his belief that she cheats on welfare. It is never mentioned whether he continued to work in the garment trade or found some other source of income. During the day, he walks around New York as a vagrant with a sign reading "The end is nigh."

During a mid-1980s murder investigation of a man named Eddie Blake, Rorschach discovered that the victim was the alter ego of the Comedian an amoral government-sponsored "costumed adventurer" and former colleague whom he seemed to admire. Suspecting a plot to eliminate superheroes, he pursued the investigation accordingly, interviewing and warning several former members of the hero community. Although no one took his theory seriously, the sudden public denunciations and subsequent self-exile of Doctor Manhattan and the attempted murder of Adrian Veidt (the former Ozymandias) bolstered his confidence that he was on the right track. Before long, however, he was framed for the murder of Moloch, an ailing former adversary, and was captured by the police. During the take down, Rorschach fought the heavily armed officers with improvised methods using ordinary household materials, with surprising effectiveness, but he was knocked unconscious as he fought to escape.

In prison, Kovacs was examined by a clinical psychologist, and subject to numerous death threats and attacks by vengeful prisoners. When taunted by inmates about being trapped inside with them, his only reply was to say that they had it backwards; they were, in fact, trapped with him. He prevented an attempt on his life in the prison cafeteria by calmly and wordlessly grabbing a pot full of boiling cooking grease and hurling it into the assailant's face. The psychiatrist later described the resultant burns on the attacker as "horrific." A former organized crime head called The Big Figure orchestrated a prisoner riot as a distraction while his flunkies attacked Kovacs. He easily, almost leisurely, dispatched the would-be assassins before he escaped his cell to pursue and drown The Big Figure (a diminutive old man) in a prison restroom. During this battle, the current Nite Owl and Silk Spectre were attempting to break him out of prison, and used the chaos of the prison riot to do so. They sought his help in their own investigation into the murders of the former superheroes.

Investigating jointly, Nite Owl and Rorschach learned that the mastermind behind the plot was Adrian Veidt, who had been hailed as the smartest person in the world. Rorschach and Nite Owl traveled to his home in Antarctica to confront him; however, they were unable to prevent him from accomplishing his ultimate goal. Before the duo arrived, Veidt teleported an enormous Lovecraftian "alien" that he had manufactured into the heart of New York City, killing millions and psychically traumatizing millions more. Exactly as Veidt had predicted, the hoax forced the nations of the world to halt their mounting hostilities towards one another and unite against the perceived alien threat, thereby preventing the inevitable nuclear showdown.

Shortly after Veidt confessed his plot to Nite Owl and Rorschach, they were joined by Doctor Manhattan and the Silk Spectre, having just returned from Mars. After a brief struggle, the adventurers realized that by exposing Veidt's act they would only manage to return the world to the brink of nuclear catastrophe. The other heroes agreed that they must keep the hoax a secret, but Rorschach flatly refused to comply (" Never compromise. Not even in the face of Armageddon. That's the difference between us, Daniel."). Manhattan told Rorschach that he "cannot allow" him to reveal the truth to the world, but Rorschach maintained his defiance. Enraged and in tears, Walter Kovacs removed his mask and demanded that Manhattan kill him if that is what it took to protect Veidt's utopia. Although reluctant and showing emotions again, Manhattan silently complied with Kovacs' request.

However, Rorschach's legacy may have had greater consequences; prior to departing for Antarctica, he wrote a lengthy journal detailing his investigation and sent it to a reactionary right-wing newspaper The New Frontiersman. While Veidt was confident Kovacs would not be believed by the public, since his mental illness was well known, the question of whether the journal's contents would be printed and his evidence seriously examined was left open ended in the very last panel of the Watchmen comics series.