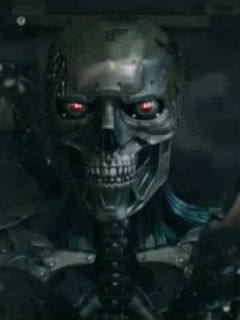 The Rev-9 is capable of acting human, even going so far as to brag to a United States Border Patrol agent by stating his whole body is a weapon and even apologized after falling into someone's shed, destroying it. It also has casual demeanor when acting with others though some robotic-like behavior can be seen.

The Rev 9 is stated to be something to run away from rather than fight due its abilities. The Rev 9's endoskeleton is extremely strong and it is very agile, however, despite its incredible capabilities the Rev 9 does not seem to have been designed to battle rogue Terminators, as an aged T-800 was able to dominate the fight between them though it wasn't able to do any serious or lasting damage until later. The Rev 9 was forced to split itself in two just to overpower and damage the T-800, simply to free itself from Carl's grip.

The Rev 9's most notable characteristic is the ability to split itself in two, given it when dealing with multiple threats. When Split, one acts similar to a T-1000, being liquid metal with no endoskeleton, and the other is simply the endoskeleton but far more agile than what has been seen from Skynet's models.

The endoskeleton itself is quite unique in appearance, while it is humanoid like a T-800, it has numerous cavities and gaps, this is likely used to store the liquid metal as unlike the T-X, the liquid metal is not just a sheath but capable of forming a human shape, meaning there is far more mass of the liquid metal.