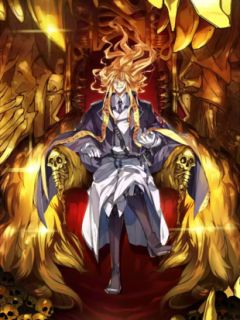 Yetzirah : Longinuslanze Testament (Covenant - The Holy Spear of Destiny): Reinhardâ??s Ahnenerbe, Materialization-Type. It is also known as the Spear of Destiny, the spear that infamously pierced the son of God. It is a weapon only he himself can wield due to being the most charismatic being in the world, representing the form of his Valhalla, as well as the pinnacle of all Ahnenerbe. The spear is described as being â??Fast like Albedo, never missing like Rubedo, and all-killing like Nigredoâ?ť. In other words, it is a spear that moves faster than its target, always chasing its targets and killing them on a physical, spiritual, and conceptual level. Reinhard can also instantly curse the target with a Stigmata with the Longinuslanze should he choose to at anytime, making them a part of his Legion and marking them as his Einherjar and slave upon death, where their soul will automatically be dragged to Gladsheimr. Reinhard can also use the spear to project beams of golden light, turning anyone and anything in its path to ashes and can even wash away the Laws of Mercurius World.

Additionally, the spear can also ignore the concept of distance, as Rindou Koga (his Ahnenerbe's successor in Kajiri Kamui Kagura) was able to do this through her use of it against the Tenma's and Valeria was able to use this to get close to Schreiber and attack him in surprise while the latter had his True Briah active, where even an incomplete activation of it caused distance to increase between him and Ren despite the former not moving at all. This aspect allows Reinhard to have the spear fired at his enemies in an instant without having to cross any distance at all. The spear can also pierce through other "worlds" such as Wilhelm's Briah, which creates a world that isolates itself from the rest and was shown to even pierce Marie herself, whose true self exists in the Twilight Beach.

Aside from Reinhard himself, those who look upon the Lance itself will have their minds burned and their souls erased. Even those of the LDO, who are capable of fighting Methuselah even while under the latter's presence of darkness, would have had trouble maintaining their consciousness while in its presence. Those who attempt to lay hands on it will also have their existence erode the longer they hold onto it - even Ren Fuji, the Ahnenerbe of Mercurius, who has the unique capacity to wield any other Ahnenerbe in the series such as Beatrice's and Rusalka's, was having his body and soul destroyed when he attempted to use it against Reinhard during the events of Kei's route.

Briah : Gladsheimr - Gullinkambi FĂĽnfte Weltal (lApoptheosis - The Fifth Universe of Gold): Reinhardâ??s Briah, derived from his desire "I want to love All and Everything". A Craving born out of wanting to embrace everyone and everything in existence. However, that desire is synonyms with that of destruction. In other words, the desire to love all and everything is equal to that of wanting to destroy all and everything. To lay waste to all that stands before him is to cherish and adore them. The desire to consume all and everything, to have them fight, kill and destroy, and be reborn to do it all over again and again. A desire that can only belong to none other than the Golden Beast himself.

It manifests itself as a massive, hellish castle the size of a city with an interior entirely made out of the millions of souls Reinhard has devoured. Its full activation is also capable of soul-ripping those who aren't able to resist its sorcery into his castle to become part of it, being able to absorb all eight hundred thousand souls of Suwahara City's populace, and those whose souls aren't ripped out are forcibly taken in, unable to leave unless granted so by Reinhard himself. Anyone that is killed within the castle or is slain or cursed with a Stigmata via Longinuslanze Testament becomes a part of Reinhardâ??s Legion of Einherjar, giving him all of their memories, experiences, and powers.

Skeleton Giant: When desired to, Reinhard can have Gladsheimr transform into a gigantic, mobile skeletal creature large enough to grasp entire mountains. It can produce more energy than any earthquake recorded in history up to that time through its movement alone and can generate golden beams of light possessing heat hotter than a nuke and capable of reducing whole countries to ash. It is also just as durable, being able to survive its attack after being reflected back by Methuselah)

Skull Army: Due to his castle being made entirely out of skeletons, Reinhard can shape them into many shapes and forms. As many of his soul stock is made up of the many soldiers of the German Army who died during WW2, Reinhard usually sets them up into formations of skeletons and their weaponry from the war, even summoning war machines like tanks, fighter aircraft, and battleships. Due to being a part of Reinhard, all of these skeletons and weapons have the ability to damage and destroy the soul just like the Ahnenerbe of the Legion as well as bringing anyone they kill into becoming part of Reinhard's legion of souls. In addition, their ammunition will never run out as it replenishes after they are restored from destruction by Reinhard's power should they somehow fall in battle (even if their soul is destroyed) due to Gladsheimr being able to continuously revive and recreate its souls and even their weapons. Because of this, it is virtually impossible to try and thin their numbers as long as Reinhard and his castle exists.

Longinus Dreizehn Orden: Through his Briah, Reinhard can even reincarnate the members of the LDO after their initial deaths where he can send them out in the castle to fight alongside or for him. He is also capable of utilizing their Briah through his Ahnenerbe, even activating several of them at once, allowing him to overwhelm his enemies through the sheer number of powers alone.

Atziluth : Du Sollst - Dies Irae (Pour forth from the Chaos - Day of Wrath): The manifestation of Reinhardâ??s Law, one that follows through with his desire of "I Love All and Everything". A desire to spread his love, and thus destruction to all things in creation, Dies Irae brings forth the scope of Reinhard's desire from Gladsheimr outwards into the rest of creation. The result is a World of conflict, where those of past, present, and future will all fight and resurrect for eternity as part of Reinhard's Legion of Einherjar. As One in All, All in One, Reinhard and his Legion of Einherjar, numbering in the millions, all fight together, representing an army that fights with and led by their commander into battle.

Kamunagara: The physical manifestation of a Hadou God's Law, existing as a universe within them. Reinhard's takes the form of a golden lion.

Legion Reincarnation: An ability possessed by very few Hadou Gods. Souls that are taken under a Hadou God's Law can be dyed in their Color, being granted Divinity and putting them to a level of existence equal to that of the God themself, becoming pseudo-Gods as a result. So long as these souls never leave their God's territory, they will have Divinity equal to theirs. Souls that are granted Divinity are also protected by their God's Law; in Reinhard's case, they are immortal and can resurrect infinitely. Of those in Reinhard's Legion, they are the LDO, the German Army, and any other soul he takes into his Law.