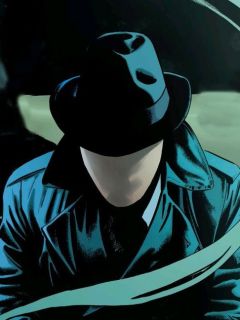 Although not quite on par with people like Nightwing, he has shown to be a proficient acrobat, and has used this skill to survive a fatal fall by rebounding off building sides and somersaulting to create more drag. He, like many other non-powered vigilantes, can get around by jumping from rooftop to rooftop.

The Question has and can assume many aliases and has as he describes "many different faces" such as the one he used to spy on Renee Montoya.

The Question possesses genius intelligence and has an extremely unpredictable way of thinking. He can make a weapon out of common objects and often uses his mind to win fights.

Easily capable of incapacitating large groups of criminals and has knocked out trained policemen and soldiers with minimal effort. Vic has shown enough skill to take down two vicious attack-dogs and their highly-trained owner spontaneously, one after the other.

His training and lifestyle demanded much determination, and he was rarely known to give up or surrender especially in physical confrontations.

His opponents often fear him due to the (arguably true) rumors of his insanity and ruthless tactics.

He has on many occasions frightened criminals into giving him information he wants, and sometimes resorts to methods that many heroes shy from, like threatening a killer with a chainsaw.

Said to be the second greatest detective after Batman. One of many, he has a superior inquisitive mind and has years of experience as an investigative reporter as well as his life as The Question.

Victor, before becoming the Question, was a TV investigative journalist. He had his own show and appeared on local news which sought out conspiracy theories, local crime rings and other violent or mysterious news. His Journalistic techniques were what drove him to become the Question.

He was trained by Richard Dragon in Kung-Fu and had exceptional martial arts skills.

A self-proclaimed philosopher, Vic Sage has spent years surviving and understanding in the modern to postmodern world of big city life. He understands the functions of the people within the city and even the city itself on a deeper level.

During a particularly tough time in Hub City, the Question sought out to learn shamanistic techniques which applied to his city. He used these skills and techniques to "feel" the city and better understand it.