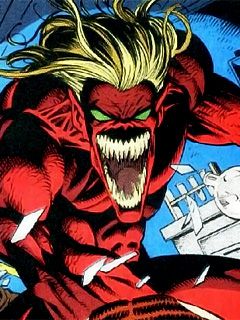 A man used as a test subject by Norman Osborn years before he became the Green Goblin.

Long before Norman Osborn became the Green Goblin, long before young Peter Parker was bitten by a radioactive spider, there was a man named Nels Van Adder who worked for Osborn Industries .

Early in his career, Captain George Stacy is on the hunt for a serial killer. In the time before super-powered individuals, Stacy refused to listen to the conspiracy theories from his brother, Arthur, about super-powered folk taking over humanity.

George finds himself called to Osborn Industries when one of his officers was attacked by a suspicious individual lurking around one of the plants. The reason Stacy was called in was because Norman refused to allow anyone inside except for him. He also insists that his new head of security escort him...who happens to be George's brother Arthur.

George and Art enter the facility with some armed police officers looking for the suspect. They are brutally attacked by a shadowy figure with long hair and claws. The attacker manages to escape but George discovers a bunch of red fluid on the floor. Arthur sticks around after George leaves and finds an Osborn employee badge belonging to Nels Van Adder.

Arthur can't help but wonder what the connection between their attacker and Van Adder is and finally confronts Norman about it. Norman tells him that Van Adder was a disgruntled employee that was let go months ago. That doesn't explain what his identification badge was doing at the scene of the attack. Osborn firmly puts an end to the conversation with Arthur.

Norman sits in a lab, frustrated that he can't locate the missing notes from his former partner, Mendel Stromm. He is visited by Van Adder, who is now a red beast. He tells Norman that because he allowed himself to be a guinea pig, he's changing and can't return home to his wife. He mentions that he killed men and that wasn't what he wanted. Norman tells him that this is all an unfortunate side effect.

Arthur continues to do some digging and notices that there were never any termination papers on Van Adder. Later, both George and Arthur confront Norman to find Van Adder about to attack him. The two brothers attempt to apprehend the red beast. Bullets don't seem to harm him. Finally, Arthur knocks Van Adder through a window where he falls into the river.

Norman then tells them that Van Adder was a former research assistant for his former partner, Stromm. Osborn says that Van Adder was experimenting with some biotechnology developed by Stromm and somehow turned himself into a monster. To make things worse, during the fight, Stromm's desk was smashed which revealed the hidden notes Norman was looking for and would use to create the Green Goblin formula.