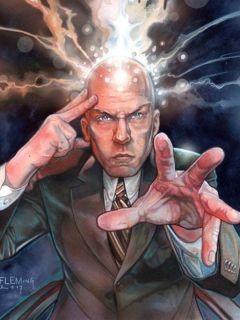 Able to read minds and project his own thoughts into the minds of others within a radius of 250 miles (on Earth). With extreme effort he can greatly extend that radius. When synched with Cerebro or Cerebra, he can connect to every mind on a planet. After he was thrown into the M'Kraan Crystal, it not only restored his mutation, but made his telepathy more powerful than it has been previously, thereby making him the world's most powerful telepath once again.

ability to create realistic telepathic illusions and cause people to experience events which are not actually occurring.

can mask his presence from being detected by others. His abilities can at times go undetected or be counteracted by other more powerful telepaths depending on their level of skill in using their own psi abilities. He can extend these defenses to others around him as well.

ability to develop a mental link with any person which remains as a connection to that individual.

ability to place large amounts of information in another's mind.

ability to control the minds of others upon mere concentration. This power can allow him to completely shut down several people's minds, making it appear as if time has stopped.

ability to possess the mind of another, and use that being's body as his own.

ability to alter the minds of others by force of will.

ability to cause loss of particular memories and amnesia in another person or group of people.

ability to erect a psychic shield for protection of himself and of other minds.

can project psionic force bolts which have no physical effects but which can affect a victim's mind so as to cause the victim pain or unconsciousness and can even kill an adversary.

ability to Astral Travel and communicate with others astrally through his own will, or through contact with the thoughts and memories of others. In the astral realm, he can use his powers to create "ectoplasmic" objects. He cannot engage in long range astral projection on the earthly plane.

can sense the presence of another superhuman mutant within a small but as yet undefined radius of himself by perceiving the distinctive mental radiations emitted by such a being.

able to transfer both his mind and powers into other host bodies if his own physical body could be somehow killed.

ability to quickly process and store information, by mental transference.

Possesses telekinetic abilities enabling him to manipulate matter on a low level with the energy of his thoughts.

Charles Xavier briefly possessed a fraction of the Phoenix Force during his time with the Starjammers.

A natural genius, Xavier is a leading authority on genetics, mutation, and psionics. He possesses considerable expertise in other life sciences. He is highly talented in devising equipment for utilizing and enhancing psionic powers. Xavier is also quite the masterful tactician and strategist, effectively evaluating situations and devising swift responses; he has, on numerous occasions, even fashioned long-term operations as complex as those of adversaries such as Sinister, Magneto, and Apocalypse.

Charles served in the United States Military, secretly employing his abilities to specialize in search and rescue missions.

In his travels in the East, he became a proficient hand-to-hand combatant and gained knowledge of pressure points.

Knowledge of the body

As an extension of his studies of pressure points, Xavier's knowledge of the body and its energies/chakras has gained him the unofficial degree of a seasoned Zen master, allotting him the ability to keep in the prime of his physique. In spite of his age, he has maintained an impressive Olympic chassis long since before he founded the X-Men and X-Corp, and has kept himself in perfect condition ever since.