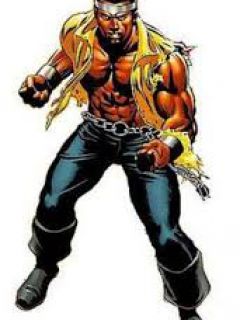 The man who would later be known as Luke Cage grew up in the streets of Harlem in the 1950s and 1960s. That was before the great Civil Rights victories. It also was well before the gentrification, when the neighborhood was another planet compared to the White areas. And not a nice one, either – those were out-and-out slums.

To survive, and without apparent support from relatives, the kid teamed up with one Willis Stryker. The two boys grew up committing numerous petty crimes and thefts to subsist. As teenagers they graduated into heavier crime, including mugging and racket.

They spent almost every moment of their life running from something, but their friendship seemed indestructible despite the hardships.

Though as brats they were just a duo, they eventually joined a major street gang. Back then those still ran the turf. Later depictions of Cage state that they joined the Bloods , though historically the Bloods didn’t exist back then, even in L.A..

A possible explanation is that Lucas and Stryker joined a street gang that would much later join the United Bloods Nation. The UBN appeared in New York City as a prison gang in 1993. As another hypothesis, the gang Cage and Stryker joined early on may have been coincidentally called the Bloods before the UBN was founded.

As they became young men, they also became gang leaders. Stryker and Lucas were renowned for their street-fightning skills. Stryker was a master knife fighter. And Lucas, built like a Mack truck, being a formidable bare knuckles fighter.

Cage was also depicted as a member of a four-man elite set called the Rivals or the Harlem Rivals. The Rivals were Cage, Stryker, Shades and Comanche, though this is a 2010 retcon .

A possible hypothesis is that this quartet left their old street gang to start working for more established mobs. Perhaps they were attempting to prove their worth as contractors to major Harlem mobsters such as Stoneface.

In his late teens, Lucas became fed up with the Harlem street gangs. He mostly stepped out of the scene. Stryker, on the other hand, rose fast. He did succeed in getting attention from established mobsters.

Things got worse when they noticed the foxy Reva Connors walking by. Both Lucas and Stryker vied for her attention, but Stryker had more bread to take her out. As a result, Lucas eventually bowed out.

One evening, made men ambushed Stryker while he was on a date with Connors. Willis wasn’t packing one of his blades, and they mauled him.

Reva managed to run and call on young Mr. Lucas for help. Lucas charged in to defend the man who had been closer than a brother for most of his life. He soundly beat up the wise guys.

Stryker was enraged, venomously accusing Lucas of being behind the assault so as to pry Connors away from him. Staggered by Stryker’s hateful rant, both Lucas and Connors left.

Fuming with bitterness and anger over this perceived treason, Stryker framed Lucas. He planted a large stash of narcotics in Lucas’ apartment and calling the police. Lucas swiftly went up the river.

Stryker then strung Connors along, falsely claiming that he knew guys who could get Lucas free.

Stryker had continued to degenerate into a mad dog. By then was stealing and reselling batches of narcotics, including dope belonging to Cornell Cottonmouth’s horse-selling ring.

As a result, contracts were launched over Stryker’s head. While Connors was riding in Stryker’s car, they came under heavy gunfire. Reva was killed and the car crashed in the river. But Willis managed to get out of the wreck without a wound on his body.

Meanwhile Lucas had ended up in Seagate (aka “Little Alcatraz”), in the South-Eastern US. This was the first time he ever left New York City. The place was hellish, and doubly so for Black prisoners given the fervid racism of the corrections officers.

Lucas never backed down as a matter of principle. And he was uninterested in joining any gang or clique. Predictably, he got into an awful lot of trouble. That included attempted escapes and too many brawls to count – the later generally not ending well for the opposing parties.

The first was the arrival of a new warden, a liberal named Stuart. He put a screeching halt to the rampant corruption, prisoner abuse, racism and unbridled violence that was the norm at Seagate. As a result the head guard, Captain Rackham, got into hot water.

Then, Stuart caught two guards beating Lucas in his cell on Rackham’s orders. He stripped Rackham of his rank on the spot. Since he could do little against Stuart, Rackham blamed Lucas for his misfortune.

Shortly after Stuart’s arrival, Dr. Noah Burstein received authorisation to recruit prisoners for medical experiments. Volunteers would receive extra consideration from the parole board. Burstein carefully reviewed the prisoners, since he was looking for men in exceptionally good health to minimise risks.

Lucas definitely fit that description. The two men became unlikely friends – even though Lucas initially refused to participate in Burstein’s procedures. But Rackham soon came to threaten Lucas in his cell. The con realised that his situation was untenable. Thus, Lucas volunteered for the experiment after all, since that was his only way out.

Burstein was working off a research grant from Stark Industries. He had developed an electro-biochemical bath that greatly stimulated human cell regeneration. Potentially, his invention could counter the damage from almost any disease and perhaps even ageing. But it was untested.

Cage stepped into the bath. Meanwhile, Burstein explained his program of short, low-powered exposures with extensive medical monitoring. However, as soon as Burstein left the room to check the sensors, Rackham came in. The guard monkeyed with the control, setting everything to maximum intensity.

Now plunged into an inferno, Lucas had to burst out of the machine. In the confusion, no one noticed he had shredded heavy machinery with his bare hands.

Lucas soon discovered that he could punch through solid stone and not even skin his knuckles. Fearing that he had killed Rackham when he burst free from the machine, he decided to breach the prison’s wall and run.

The guards opened fire. They assumed he was dead when they found Lucas’s bullet-riddled shirt. Lucas, on his end, discovered that he was bulletproof and left discreetly.

Lucas spent months walking back to the Big Apple, doing odd jobs and dodging cops. He eventually made it back there. And if he can make it there …

Within hours of being back in NYC a fateful incident took place.

Some thug sprinted out of the dinner he had just held up, and ran straight into Lucas. The thug shot the fugitive point blank, which only resulted into being backhanded unconscious. The owner of the dinner and the patrons were enthusiastic, calling Lucas a super-hero. They spontaneously gave him a cash reward.

The flattering incident inspired Lucas, as well as providing him with some much-needed bread. By that point he already had decided to change his name, to leave his past behind. He started calling himself “Luke Cage” as a nod toward his time in prison.

He also had decided to get payback against Stryker in order to honour Reva Connors’s memory. Since he was going to mix it up with the gangs anyway and had just discovered there might be money in that, Cage came up with the “hero for hire” concept.

The costume came from a pawn shop. A stage magician with an escape artist performance had had to sell all of his stuff, which Cage bought for pennies to the dollar. Since the man had sold everything, Cage even bought a length of heavy chain that was part of the act, and turned it into an unusual belt as a symbol of his former captivity (and possibly as a political statement , given the times).

Spending the rest of his reward, Cage got a room in a fleabag hotel and printed out business cards. He then hit the street in Harlem, violently clashing with collection men and other mob types. He would then distribute his business cards (“Luke Cage, Hero for Hire”) to onlookers.
Superhero Class