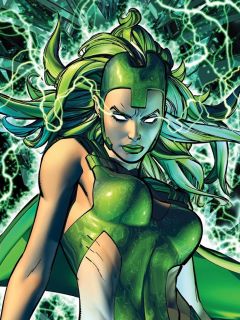 Lorna is an Alpha-mutant with both a primary and Secondary Mutation. After her sister Wanda's M-Day, Polaris lost all of her mutant abilities. Polaris then became Pestilence and had Celestial technology grafted to her spine by Apocalypse, which has somehow reactivated her X-Gene and her powers.

Her personal polarity is opposite that of Magneto's.

ability to manipulate magnetism. Although she has the potential to exercise all of the powers that Magneto has, as yet she has only used powers involving the manipulation of magnetic, electrical, and gravitational fields. Moreover, she has yet summon as great an amount of energy as Magneto has. The exact limits on the amount weight that she can magnetically lift at present have not been measured. Since she has, in the past, preferred not to use her powers in combat situations, and has decades less experience with them, she is not up to par with Magneto's level of experience. As with Magneto, it is unknown whether Polaris's powers are purely psionic or whether they derive from her physically.

The main feat made possible by magnetism is Polaris' ability to lift and manipulate metal. She has shown such fine tuned skills as to nearly liquefy, mend, and reconstruct metallic objects, and has some level of influence on the ferrous metals that reside in everything. She once mended and reconstructed silverware and metallic plates into a metallic suit identical to Magneto's costume.

Polaris can protect herself from physical harm, can stretch her fields to protect a large group, and can suspend persons or objects in the air.

Polaris can suspend herself in flight by riding the Earth's magnetic field.

Polaris can focus her magnetic energy into powerful concussive blasts. She can also overload or short-circuit electrical systems. She has been shown destroying Shi'ar warships with single magnetic pulses.

Polaris has been shown absorbing some forms of energy through her magnetic force fields to temporarily boost her own strengths. Early in her career with the X-Men, she absorbed Storm's lightning blast, Cyclops' eye beam, and Havok's energy beam at the same time, giving her enough strength to propel an entire island from the earth and into space.

Polaris is tied very closely to Earth's EM Field. As is it effected, so is she. She knows instinctively all that happens to it, and with this link, is granted an odd sort of immortality. Earth lends her strength by it's simple existence. She draws on this strength all unconsciously.

Polaris has such control over her powers that she is able to manipulate the natural iron within the blood of living organisms. She was capable of reversing the flow of an entire crowd's blood in order to render them unconscious.

Polaris has the ability to manipulate the electromagnetic spectrum and some energies like electricity, electromagnetic and magnetic (the limits of these are unknown). This is totally different from Storm, who can handle (almost) all the energies of the spectrum, but Polaris has great potential for it. Her power is such that she is compared to her father Magneto. Polaris has a connection to the electromagnetic field, allowing her to handle various types of energies such as electric, gamma, x-rays, ultraviolet, visible light, lasers, and more.

Lorna possesses expertise in geophysics, and has earned a Masters degree in that field.