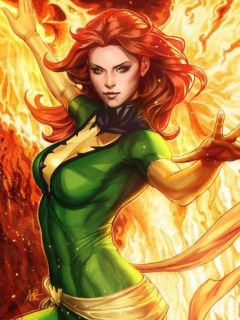 Jean's powers first manifested at the age of ten when her telepathy was prematurely triggered when her best friend Annie Richardson was hit by a car. As Annie lay dying, Jean instinctively linked to her mind and the trauma of experiencing her friend's death nearly killed Jean as well. The incident left Jean in a coma.

For three years, her parents sought the expertise of specialists to rouse Jean out of her catatonic state but only one, Professor Charles Xavier, was able to help. He realized that Jean's young mind could not cope with her telepathy yet so he decided to mentally block her access to this ability, allowing it to evolve at the natural pace it would have save for Annie's tragic death. Even though Jean continued living with her parents until she was a teenager, she had many training sessions with Xavier.

When she became a teenager, she left her parents and began attending Xavier's "School for Gifted Youngsters" and joined the X-Men under the name of Marvel Girl. She was the only female founding member of the team. At first, Jean could only use her telekinesis to lift an equivalent weight to what she could lift physically. Exceeding this limit would result in strain that would culminate in her loss of consciousness.

Jean and Cyclops both had a crush on each other, but neither were aware of the other's feelings. Cyclops was afraid to get close to anyone, lest his powers hurt that person. He also felt that he was no match for Angel, who Jean was dating at the time. Once, Jean had a date with Angel, but insisted on taking Cyclops along, which confused and frustrated both men.

Jean eventually left the school to enlist in Metro College where Johnny Storm, the Human Torch, also attended. She would continue to assist the X-Men on a regular basis, but did not continue living at the X-Mansion. The theme of her seeking tertiary education would provide a number of later X-Men subplots. Jean would later design new uniforms for the team.

Angel decided that Jean was not actually interested in him and started a relationship with his old friend Candace "Candy" Southern. Jean and Cyclops later admitted they were in love with each other and started dating openly.

Requiring seclusion while he prepared to deal with a forthcoming invasion of Earth by the alien Z'nox, Xavier had the mutant Changeling impersonate him in order to supervise the X-Men in Xavier's absence, telling only Jean of his plan and swearing her to secrecy. However, the Changeling, as Xavier, died heroically in action, and Xavier felt obliged to continue the pretense of his death.

Fred Duncan, the X-Men's FBI liaison, considered the united team to present an easy target for "the ever-growing population of evil mutants" and felt the X-Men would be more effective acting as individuals and spread across the United States. At the same time, Professor X's will confirmed that his estate would serve as a charitable trust with each of the five active X-Men a trustee, to ensure that they would need to stay in contact with each other. Jean and Cyclops remained in New York while Beast and Iceman relocated to California. Angel remained mobile across the United States. The X-Men would later reunite.

Jean later completed her college education and found employment as a model. Her first assignments were swimsuit presentations. At this time, Jean was introduced to Polaris and they soon became friends. Jean was also introduced to Alexander "Alex" Summers, Cyclops' younger brother, who was just graduating from college. He would soon serve with the X-Men as Havok.

Xavier was later revealed to the others to be alive, as he had them help them defeat the Z'Nox.

Many months later, after Xavier had recruited a new team of X-Men to help save the others from, most senior members left and so did Jean, who involuntarily found herself attracted to new member Wolverine. She still remained in contact with the X-Men, and became good friends with the new teammate Storm.

Later while meeting with Cyclops, Jean was abducted by Sentinels along with Wolverine and Banshee and taken to a space station in orbit around Earth. The other X-Men later came and rescued the three from the Sentinels.

Returning from space, Grey attempted to pilot a shuttle back to Earth during one of the worst solar storms in history. The shuttle was unshielded and Grey would have died were it not for the intervention of the cosmic entity known as the Phoenix force. The shuttle crashed into Jamaica Bay. Jean seemingly emerged from its remnants, imbued with vast cosmic powers. It was later retconned that Jean was actually placed into a coma in a cocoon in the depths of Jamaica Bay and the Phoenix adopted her identity as a heroine who claimed to be Jean and was so convincing an imposter that not even Professor X could detect the difference.

Phoenix believed herself to be Grey and she and Cyclops continued their relationship, until Phoenix lost control of her powers after being manipulated by Mastermind, and eventually committed suicide. The Dark Phoenix Saga, the lengthy story of the decline and fall of Phoenix, by Chris Claremont and John Byrne, is regarded as one of the best comics stories of the 1970s.

Grey's survival was revealed when the original X-Men formed X-Factor, which she joined when she emerged from her coma. Cyclops, in the meantime, had married her double (later revealed as her clone), Madelyne Pryor. When Scott left Pryor for Jean she felt distraught and betrayed. Goblins used her despair to make her the Goblin Queen. She died in battle with Jean after she (becoming suicidal upon the discovery of her being a clone) linked their minds together and killed herself, hoping the link would kill Jean as well (it did not).

As a result, Cyclops and Grey were able to resume their relationship, and eventually married. Shortly thereafter, she resumed using the name Phoenix as an attempt to redeem both the entity and herself in her mind, and also to honor her "daughter" from a future parallel world, Rachel Summers, who at the time was believed to be dead.

The list of the Twelve had both Jean and Cyclops on it. Jean and Cyclops decided to help the X-Men in this turning-point battle and in the end, Cyclops apparently perished as he merged with the villain Apocalypse. Jean then began a search for her lost husband with her adopted son Cable. They found him and Jean separated Cyclops from Apocalypse's spirit.

A combination of Jean's new duties as headmistress, her re-emerging Phoenix powers, and Scott's temporary merger with the evil mutant Apocalypse drove a wedge between the couple. Cyclops and Jean started to have marital problems; Cyclops tried to show Jean that he needed to talk about his feelings of boredom with his own personality after being possessed by Apocalypse, though he didn't know how to talk to her. Their relationship became further strained when Jean began showing signs of the Phoenix Force, which Cyclops thought would lead to another disaster.

Cyclops then turned to Emma Frost to talk. Emma seduced Cyclops and began to have a psychic affair with him. When Jean walked in on the two in bed, a psychic battle erupted between the two telepaths, with Jean using the full extent of her powers on Emma. This led to Cyclops briefly walking out on both Jean and the X-Men. Upon his return, in the storyline Planet X, Xorn in the guise of Magneto attacked the X-Men, and battled Jean. In spite of her incredible power as the Phoenix, Xorn was able to mortally injure Jean by manipulating the iron in her blood and inducing a planetary-scale stroke within her. As she died in Scott's arms, she told him she forgave him.

Jean was then resurrected in the last arc of New X-Men: "Here Comes Tomorrow", bearing the Phoenix entity once again. This future timeline went wrong when Scott Summers decided to decline the offer of Emma Frost to once again open up Xavier's Institute. Hank McCoy then takes up the dubious burden of re-opening the school and under the pressure, begins taking the drug �Kick�. The villain John Sublime possesses Hank McCoy through �Kick� and he is driven insane by it. Jean comes in time to stop Hank from destroying the world with the Phoenix. She then transcends into the �White Room� with all the other Phoenix hosts, but not before sending her husband Scott Summers a mental push to accept Emma Frost�s offer and affections.

Somehow knowing her fate before she died, she made a holoempathic imprint of her full essence, and everything that she was, for her daughter, Rachel "Grey" Summers. She did this so that no matter what happened to her body, her soul would always be with Rachel.

Recently, the Shi'ar resurrected the Phoenix entity in hopes of destroying it while it was relatively weak. The entity managed to escape and fled to Earth, where it needed a host to sustain itself. After possessing a firefly and running into Wolverine, the entity resurrected Jean and bonded with her once more.

Jean realized that the Phoenix was resurrected too early and as a result was mentally unbalanced. She had a confrontation with the X-Men before teleporting Wolverine to the North Pole, where she had him stab her several times, leaving the Phoenix entity weakened and allowing her to once again gain control. Jean then plunged herself through the ice, freezing instantly. When the X-Men arrived, Wolverine told them that Jean was "dead. Or as close as she can get." When the Phoenix entity returned from the ice, she possessed Emma Frost as the new love to Scott Summers' life. As Emma struggled against the force, a hopeless Scott prayed for Jean's return. With no other choice, he freed Jean from the ice.

After Jean once again bonded with the Phoenix entity, the X-Men discovered the true reason for her return. Emma called out telepathically to her Stepford Cuckoos and focused the empathic impressions of all Jean's dearest friends. She felt their love for her. This allowed both Jean and the Phoenix to achieve balance before returning to the cosmos. Parting from Scott, she asked one last request before leaving, to see his eyes.

The Phoenix Endsong limited series cleared up for anyone who didn't know the difference between Jean and the entity; there is none. Jean's mutation makes her more than a mere host; she is the closest thing that the force has to a human form which makes her closer to it than any other host body. She is the most powerful and this is what has finally caused her to become The White Phoenix of the Crown. Jean is currently in search of the missing fragments of the Phoenix Force that were scattered through space by the Shi'Ar in order to bring them all back to the "White-Hot Room", which is the core of creation itself, in order to make herself and the Phoenix whole again.