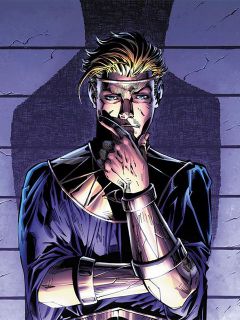 Adrian Veidt was born in 1939, the son of rich immigrant parents, he was found to be incredibly intelligent. After his parents and his teachers became suspicious of his grades, he successfully hid his intelligence by deliberately achieving average grades. After his parents' deaths, he inherited their substantial fortune at age 17, but chose to give it all to charity. Veidt then embarked on a vision quest, following the route of Alexander the Great - a childhood idol - throughout the Mediterranean, Asia Minor, and former ancient Persia.

It was during this journey that he consumed a ball of hashish and decided to become a superhero. Returning to America, he named himself "Ozymandias" and became a costumed vigilante, focusing particularly on organized crime and earning a reputation as "the smartest man on the planet." However, his own cases robbed him of the idealistic belief that battling crime would truly lessen evil and suffering in the world. This was brought to a head when an abortive attempt to organize a new superhero team was disrupted by the Comedian, who noted in his brutally apt way exactly how petty the doings of the costumed heroes were in a world where the threat of nuclear war hung overhead, and how powerless they were to stop it. Veidt was inspired to do just that.

In 1975, two years before vigilante crime fighters (superheroes) are banned by the "Keene Act," Veidt retired from super heroism, marketing his image for money. This helps bankroll his scheme of creating a catastrophic event and deceive the world into uniting against a common enemy, in Veidt's case, a horrific alien invasion. To that end, he employed geneticists to clone the stolen brain of a murdered psychic and use it to create such a creature with a group of artists and creative personnel to help create the illusion. He also invents a limited form of teleportation based in part on the studies of (and studies by) Dr. Manhattan. Upon completion, he arranged the murder of all of his accomplices to maintain the illusion.

To prevent Dr. Manhattan from interfering, he hired old associates of the superhero and secretly exposed them to radiation to induce terminal cancer in them, then engineered a rumor that Manhattan was responsible, causing Dr. Manhattan to exile himself to Mars and thereby setting off a chain of events that threaten to start a global war. When the Comedian inadvertently learned of Veidt's plans, Veidt personally murdered him as well. The death of the Comedian caught the attention of Rorschach, who investigated the crime and mistakenly theorized that there existed a conspiracy to murder masked adventurers. Although Veidt arranged an assassination attempt on himself to throw off suspicion, he framed Rorschach on a murder charge to get him out of the way.

Unknown to him, the current Nite Owl and Silk Spectre grew to believe that Rorschach's investigation had merit and sprung him from prison to investigate the matter. In addition, Dr. Manhattan took Silk Spectre to Mars where she convinced him to return to Earth.

However, the superheroes were unable to stop the fulfillment of Veidt's scheme, which led to the deaths of over three million people in New York City. The world governments fell for this ruse, and agreed to a union to oppose this new alien menace. Seeing as how Veidt's plot had the desired effect of uniting the nations of the world and averting a possible nuclear war, Doctor Manhattan, Nite-Owl and Silk Spectre agree to keep silent about what they know, as it would only plunge the world back to the brink of disaster. Rorschach alone refuses to keep silent, telling Dr. Manhattan that he will never compromise, not even in the face of Armageddon, Dr. Manhattan must kill Rorschach before he can tell anybody what he knows, and does so. When Veidt asks the precognitive Dr. Manhattan for verification that he did "the right thing" and that his plans "worked out in the end," Dr. Manhattan can only reply that nothing ever ends, leaving Veidt once again in doubt as to whether or not his plan was successful.