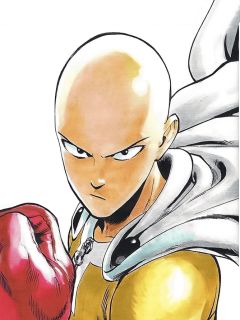 One Punch Man's powers and abilities

Saitama possesses seemingly limitless physical strength and is capable of effortlessly defeating powerful monsters and villains, with a single, nonchalant punch (although this strength is not limited to punches). Saitama's punch is so powerful that many enemies simply explode when struck. He is also shown to effortlessly destroy walls and buildings. An example of this casual, yet overwhelming offensive power occurs when Saitama launches himself from the top of a building, and blasts right through a city-sized meteor. When launched from the earth to the moon by a strike from Boros, he used his jumping power to return to the earth in mere moments, causing a huge shock wave and immense tremors . A "normal" punch from him is shown to be very fatal to someone as durable as Boros. A single "serious" punch is able to somehow counter Boros's destructive energy beam attack, and split the sky in half along the whole planet. Saitama has shown to be able to control the strength of his attacks, but still tends to go overboard, occasionally causing mass devastation in the aftermath.

His inability to fly is somewhat compensated by his ability to use his strength to leap tremendous heights and distances. This can be shown when smashed his head through the ceiling of a gymnasium during the hero tryouts.[71] He was also able to smash a building into its foundation just by leaping off from its roof. His greatest feat in this regard, however, was when he leap from the surface of the moon and ended up back on Earth at a specified point.

Saitama was able to complete a 1500 meter dash in an instant during his hero tryouts. He has proven able to effortlessly keep up with Sonic, who is able to move at above hypersonic speeds. Even Genos' computerized targeting systems have difficulty tracking him. Saitama has also shown the ability to run-down a building to save a piece of salmon he was having for lunch and leap back up said building without on-lookers noticing he had even done so. Ironically, despite his incredible reflexes and speed, he still has problems squashing a simple mosquito.

He is so fast that he leaves afterimages when moving at high speeds, and is agile enough to dodge Beast King's rapid-fire Limb cutter attacks while moving in for the kill. After assaulting Saitama with a flurry of punches in his practice fight, Genos realized that he was fighting his afterimages.

Saitama's senses are far beyond the human norm, being able to keep track of extremely fast opponents, such as Sonic easily. He also seems to have developed a sixth sense; being able to dodge danger even though he hasn't seen it. Nevertheless, Saitama's senses do not have the same degree of 'resolution' as some of Genos' sensors, which can detect and distinguish foes at a greater distance. In spite of it however he does possess impressively sharp hearing, being able to pick up on various chatter from bystanders a good distance away even while fighting monsters and the like. He is also able to see in the dark as he was able to spot a kid a great distance away during the night.

Saitama can withstand blows from extremely powerful beings such as Carnage Kabuto without taking a scratch or feeling any pain. When Genos created a huge, spherical blast of flame to kill Mosquito Girl's mosquitoes, Saitama remains standing right next to him totally unharmed and unperturbed. He also survived being kicked to the moon by Boros in his fully powered state, and going from the Earth to the moon and back with little to no damage from leaving and entering the Earth's atmosphere (only his clothes were burnt). Blunt strikes aside, Saitama was able to casually stand near Genos' incineration blast without taking damage. Saitama also prefers to dodge or block attacks using edged weapons rather than take them head on, as he sometimes does with strikes from fists or blunt objects. It has been shown that, despite the dangers of holding ones breath in space, Saitama is able to do so with no negative effects on his body. However, it is worth noting that Saitama does not see mosquitoes as a potential weakness, preferring to hide from the mosquito swarm heading his way rather than confront it, although he did not know that a monster was responsible for the swarm in the first place.

Fubuki has noticed that due to Saitama's astonishing will power he is immune to psychic attacks. However, it is still noteworthy, that his muscles "twitched" when Tatsumaki used her powers on him.