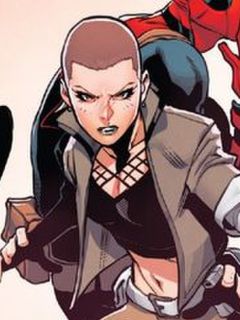 Ellie Phimister was a Genoshan teenager and a student of Emma Frost. Her mutant power gave her precognitive nightmares and premonitions. She chose the codename Negasonic Teenage Warhead for herself.

During a telepathy class with Emma Frost, Ellie revealed that the previous night she had the same nightmare fifty times wherein all people in Genosha were exterminated. She also pointed out that she experienced the same vision during the class. At that point, Cassandra Nova's gigantic Wild Sentinels appeared on Genosha and wiped out half the world's mutant population: 16 million people.

Emma Frost carrying Ellie's corpse out of the ruins of Genosha

Ellie's corpse was carried by Emma Frost, who had survived the Genoshan genocide thanks to her secondary mutation, when she was found by Beast and Jean Grey. Emma proclaimed the teenager to be a credit to her family and the mutant race and suffered a mental breakdown when she found out Ellie was dead.

When Emma Frost's subconscious began attacking the X-Men due to a telepathic attack planted by Cassandra Nova, Negasonic Teenage Warhead appeared as a member of the Inner Circle of the Hellfire Club with the Black King and Perfection.

She faced off against Kitty Pryde and predicted she'd uncontrollably phase through the ground, which cause her to do so. The telepathic projection of Ellie was "murdered" by Cyclops when he shot her with a handgun.

Ellie was one of the many thousands of deceased mutants resurrected by Selene with the help of Eli Bard's Techno-Organic Virus. After Destiny's escape, Ellie joined Thunderbird and Caliban as one of Selene's righthand slaves.