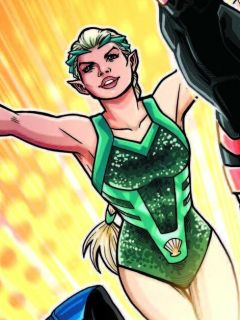 Namorita was born in 1958 to Namora, half-human cousin of Atlantis's Prince Namor; unknown to her husband Talan, Namora became pregnant via genetic manipulation by Atlantean scientist Vyrra, who implanted her with her own clone, infused with genes from Atlantis's greatest warriors. Talan died when Namorita was three, and she and Namora relocated to Lemuria. Eventually, Namora grew attracted to Lemuria's ruler, Merro; however, Namora's rival, Llyra, poisoned Namora when Namorita was still a pre-adolescent. Llyra assumed the throne of Lemuria soon after, and Namorita remained in her care, suspecting her of Namora's death but unable to prove it.

In recent years, Llyra plotted against Namor and forced Namorita to lure Namor into a trap. Namor foiled their plans and, reunited with the cousin he had not seen since her infancy, he entrusted her welfare to his longtime surface friend, Betty Prentiss. Under Prentiss's guidance, Namorita attended high school and college, and she took Prentiss's last name following her guardian's death. Namorita herself acted as mentor to the alien Wundarr, and when he attained adult intelligence as the Aquarian, she briefly joined his spiritual movement, the Water Children.

When the alien menace Terrax surfaced, Namorita and other superhumans defeated him and joined forces as the New Warriors. After some time with the Warriors, Namorita was shocked to learn of her cloned nature. Reassured by Namor, she fell in love with teammate Nova, only to undergo a physical transformation into a more primitive and powerful form of Atlantean. Eventually regaining her original appearance, she and Nova grew apart, and she later dated the Human Torch of the Fantastic Four, although that relationship also ended. At present, she co-rules Atlantis with Namor and the warrior Andromeda.

Recently, during a televised raid by the New Warriors of a building in which Cobalt Man, Speedfreak, Coldheart, and Nitro, who had recently escaped from the Raft, resided, Namorita followed after Nitro. Slamming him into a bus, Namorita taunted him, but Nitro screamed he wasn't the kind of loser that she was used to facing and that she was in fact "playing with the big boys now", before letting off a massive explosion that killed Namorita, Night Thrasher, Microbe, Cobalt Man, Speedfreak, Coldheart, all of the children at the nearby elementary school, and all residents in the surrounding neighborhood where the fight took place.