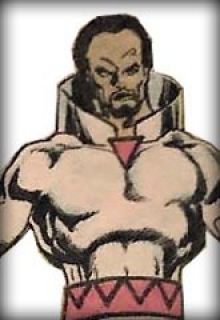 Moses Magnum was fascinated with weapons as a youth. When Italy invaded Ethiopia, he joined the invaders against his own people. He eventually became the world’s foremost independent weapons manufacturer. When Magnum’s Deterrence Research Corporation (DRC) was hired to develop a toxic biochemical gas, he tested it on kidnapped innocents. The Punisher (Frank Castle) and Spider-Man (Peter Parker) shut down this operation, though Magnum narrowly escaped death. As Magnum Force, he established a mining operation on Katsyu Shima island to tap Earth’s core’s potential energy. His forces abducted geophysicist Amanda Sheridan for her knowledge of the region, but they were opposed by Power Man (Luke Cage), hired to protect her by Sheridan’s grandmother, whose grandson and his family had been killed by Magnum. Magnum’s drilling triggered a massive earthquake which Cage and Sheridan escaped, but Magnum fell into the drill shaft to his apparent death. He was saved by the mutant conqueror Apocalypse, who gave Magnum seismic powers in return for his servitude.

Supplied with additional technology by They Who Wield Power, Magnum subsequently threatened to sink Japan if he was not proclaimed its ruler, destroying the port city of Agarashima to prove his intentions. Opposed by the visiting X-Men and national hero Sunfire, Magnum ultimately unleashed his power but was countered by Banshee, who burned out his own power to block Magnum’s seismic energy. The resultant explosion destroyed Magnum’s base, but Magnum survived. Re-establishing his company as Magnum Munitions, Magnum purchased the classified Deathlok cyborg technology from Cybertek. After the criminal High-Tech stole the technology, Magnum sent one of his agents in a massive “Terrordome” weapons platform to retrieve it, but was thwarted by Deathlok (Michael Collins). Magnum subsequently bid against rival weapons manufacturers Advanced Idea Mechanics (A.I.M.) for a defense contract, destroying their world headquarters after they refused to withdraw their bid. Magnum used the subsequent profits to outfit a new army, conquering the African nation Canaan and seeking to restructure it into a homeland for African-Americans. Magnum then sought to ensure Canaan’s economic independence by invading neighboring Wakanda, but Wakanda’s king, the Black Panther (T'Challa), foiled the invasion with Deathlok’s aid.

For his failures, Apocalypse punished Magnum by stripping him of control over his power, resulting in Magnum triggering an earthquake whenever he touched solid ground. Desperate to redeem himself, Magnum made base on the massive floating resort Evangeline and had his forces steal an experimental seismic cannon to help stabilize his powers, bringing them into conflict with the Avengers. His control over his powers seemingly enhanced by the cannon, Magnum intended to destroy the U.S. Eastern seaboard, but was opposed by the Avengers and neophyte heroes Triathlon and Silverclaw. Knocked onto the nearby island of Martinique during the battle, Magnum triggered an earthquake that opened up a chasm beneath him, once again falling to his apparent death.