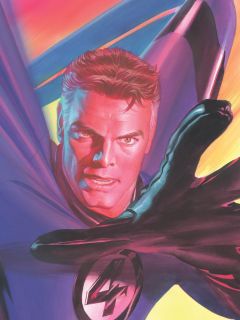 Reed Richards, the only son of wealthy physicist Nathaniel Richards and his wife Evelyn, was a child prodigy with special aptitude in mathematics, physics, and mechanics. Evelyn Richards died when Reed was seven. Nathaniel Richards encouraged and guided young Reed in his scientific studies, and Reed was taking college-level courses by the time he was fourteen. Richards attended several universities, among them California Institute of Technology, Columbia University, Harvard University, and State University in Hegeman, New York State. It was at State University that Reed Richards first met two of the most important individuals in his life. He was assigned to room with a foreign student, a scientific genius named Victor Von Doom. The imperious Von Doom took an immediate dislike to Richards, and decided to take other quarters. As Doctor Doom, Von Doom would later become Richards' greatest rival and enemy. Richards instead gained as his roommate former high school football star Benjamin J. Grimm, who became Richards' closest friend. Richards was already intending to build a starship for interstellar travel. When he told this ambition to Grimm, Grimm jokingly said that he would pilot the starship for Richards. While attending Columbia University Richards rented living quarters at the Manhattan boarding house owned by the aunt of a young girl named Susan Storm. Though she was still only a child, no more than twelve years old, Susan fell in love with the older Richards, much to his embarrassment. Three years before Reed Richards tested his starship, his father mysteriously disappeared. In fact, Nathaniel Richards had devised a time machine which he had used to attempt to journey into the future of his own world. However, the machine actually transported him to an alternate Earth with a history considerably different from our own; Reed Richards would be reunited with him while visiting this alternate Earth years later. But before Nathaniel Richards left his own time line, he made arrangements that left two billion dollars to his son. Reed Richards spent most of this money on his project to build and launch his starship. This project, based in Central City, California, received further funding from the federal government. Reed Richards recruited his old friend Ben Grimm, who had become a successful test pilot and astronaut, to pilot the starship. Susan Storm, who was now an adult, joined Richards in California. Richards and Storm were engaged to be married. Shortly before the starship was to be launched, Richards used his scientific knowledge to defeat the extraterrestrial being Gormuu, who had intended to conquer Earth. Richards' encounter with Gormuu strengthened his resolve to finish the starship, which he saw as a first step in making it possible for mankind to defend itself from extraterrestrial threats. However, the federal government then threatened to withdraw its funding from the project. Richards decided to take the starship on a test flight himself before the funding was withdrawn. Grimm was opposed to the idea, warning that the starship's shielding might prove inadequate protection from intense radiation storms. Nevertheless, Grimm was persuaded to serve as pilot, and Susan Storm and her adolescent brother Johnny insisted on accompanying Richards as passengers. The four friends stole onto the launch facility, entered the starship, and blasted off. They intended to travel through hyperspace in the ship to another solar system and back. However, unknown to Richards, a solar flare caused Earth's Van Allen radiation belts to be filled temporarily with unprecedented, ultra-high levels of cosmic radiation. Since the ship was designed to shield against ordinary levels of radiation, the cabin volume was subjected to intense cosmic ray bombardment, which irradiated the four passengers and wrought havoc on the ship's controls. Pilot Grimm was forced to abort the flight and return to Earth. Once back on Earth, the four passengers discovered that the cosmic radiation had triggered mutagenic changes in their bodies. Reed Richards discovered that he could become malleable and elongate his body at will. Richards convinced the three others that the four of them should use their newfound powers for the good of humanity as members of a team he named the Fantastic Four. Richards, who became the team's leader, named himself Mister Fantastic, while Ben Grimm, Susan Storm, and Johnny Storm named themselves the Thing, the Invisible Girl (later Invisible Woman), and the Human Torch, respectively. The profits from Richards' patents and royalties funded the team's activities. Under Richards' leadership the Fantastic Four has become Earth's most honored team of superhuman adventurers, and has saved the world from conquest or destruction many times. Richards eventually married Susan Storm, and they now have a son, Franklin. After many years, Reed joined his wife in semi-retirement from their superhero career. They tried to raise their son Franklin in a relatively normal environment, but soon, Franklin was kidnapped by the villains Nanny and the Orphan-Maker at the same time that New York was undergoing a demonic invasion. Richards and his wife teamed up with Captain America (then, the Captain) and other heroes to reform the team Avengers, which had then recently gone on hiatus. Richards, however, continually disrupted the Avengers' team dynamic with his natural penchant for leadership. Richards and his wife soon left the team and rejoined the Fantastic Four at their base. Since then Reed and the rest of the Fantastic four have continued to protect the world from every threat they can.