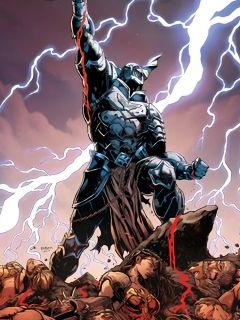 Bruce Wayne swore to wage a war on crime after the murder of his parents in a Gotham alley when he was just eight years old, promising that he would be a warrior of justice and will show mercy unlike his enemies. When Ares, the Greek god of war, created a helmet that amplified his powers a hundredfold, war broke out in the effort to stop him. For two years, Batman and Wonder Woman fought side-by-side just to get close enough to attempt to stop him. During the war, Bruce and Diana fell in love with each other. He and his allies swore to kill the god of war in order to end his reign of terror once and for all.

As they finally mounted an attack to kill Ares, the two were able to get the helmet off the war god. Diana was however incapacitated by Ares, causing Batman, who was the last one from his army still standing, to think she had died. Bruce swore to make Ares pay, but the god of war mocked him in response. Driven by grief, he put on the helmet of the god of war in order to defeat him despite being warned of its corrupting influence by Diana earlier, believing he could wield it mercifully while making war fair and just. With the helmet's powers, he succeded in killing Ares, but was turned into merciless warrior and started to see his old code as worthless.

Afterwards, he learned that Diana had survived and was only stunned by Ares. Afraid of what the helmet's power would do to Bruce, she tried to remove it. However, he was so addicted to the power, he chose to kill the woman he loved rather than risk losing the helmet. With virtually unlimited power and no sense of morality, Bruce went on to wage war on the entire world. Starting with killing only villains, he quickly escalated to killing his fellow heroes when they tried to pull him out of the darkness. Soon no one was left to stop his rampage.

After slaughtering the gods, he waged a war on Themyscira, the home of the Amazons, for three days. Every Amazonian who was slaughtered had to pay golden coins to the ferryman on the River Styx in exchange for the passage to the Elysian Fields. They were however betrayed as all these coins were melted to make a large golden drachma, and the souls of the dead Amazon women were bound to it.