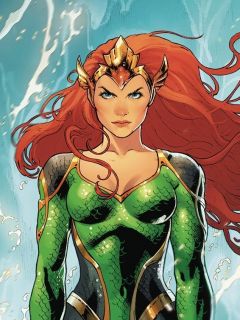 Mera was once an undersea queen in an alien otherworldly dimension commonly referred to as Dimension Aqua. Several years ago, a criminal named Leron seized control of the kingdom and deposed Queen Mera. Exiled from her kingdom, Mera fled Dimension Aqua for the Earth dimension whereupon she met the Atlantean sea-king, Aquaman. Aquaman and his sidekick, Aqualad, vowed to assist Mera in any way possible. Leron pursued Mera to Earth, and managed to capture her along with Aquaman. He brought them back to Dimension Alpha where they were imprisoned. Aided by the water sprite known as Quisp, Aquaman managed to free Mera and defeat Leron. However, rather than return to the throne to her kingdom, Mera elected to return to Atlantis with Aquaman. As Mera continued to share in adventures with the sea-king, the two began to fall in love. The two were soon wed and Mera lived with Aquaman at the Atlantean Royal Palace.

Before long, Mera gave birth to Aquaman's son, whom they named Arthur Curry, Jr., aka, Aquababy.

Less than two years later, Mera suffered the greatest tragedy in her life. Aquaman's nemesis Black Manta kidnapped Arthur Curry, Jr. and confined inside of a translucent tank filled with poison. The child lapsed into a coma and Mera embarked upon an ambitious crusade to save him. She found the means to return to Dimension Aqua and fought against the tyrant Leron in order to learn the location of a special healing device. She discovered that Leron had taken all of Mera's possessions and cast them away into the Great Pit. Mera braved the pit and fought against elemental monsters in order to retrieve the device. Her quest proved successful, but as she returned home to Atlantis, she found that she was too late. Arthur Curry, Jr. had died.

This ultimately led Mera to suffer a nervous breakdown. She abandoned her husband Aquaman, blaming his "weak genes" for Arthur, Jr.'s death. It was her belief that had her son been born of a man from her dimension, then he would have been strong enough to survive Black Manta's attack. Their marriage dissolved, Aquaman left Atlantis, but Mera stayed behind. Her mental stated continued to deteriorate until finally, one of the interim rulers, Lord Wexus had her committed to the AHARD-1 hospital center. She remained there for several months until such time that Aquaman returned to repel an invasion force of giant jellyfish. Aquaman tried to make peace with Mera, but she savagely attacked him. While attempting to defend himself, Aquaman accidentally pushed Mera too hard, impaling her upon an upturned piece of metal. Believing her dead, Aquaman had her placed inside a coffin and taken to the royal palace. However, as Mera is not native to this dimension, her vital organs are not located in the same position as a normal human's. She in fact survived being impaled and rose from her coffin. With nothing more to say to Aquaman, Mera left the Earth realm and returned to Dimension Aqua. Mera was chosen as the deputy for the Red Lantern Corps during the Blackest Night storyline and after the battle Carol Ferris was able to use her ring's power to keep Mera alive long enough for Saint Walker to remove the destructive effects of the Red Ring from her body with his Blue Lantern Ring. Afterwards she is happily reunited with her husband who was one of the people resurrected by the power of the White Lantern Corps.