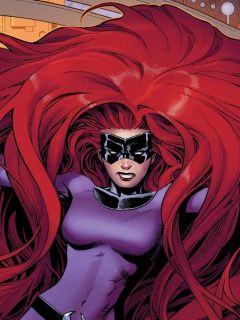 Medusa was the first of two children born to Inhuman nutritionists Quelin and Ambur. Quelin was the brother of Rynda, wife of King Agon. As such, Medusa was considered a member of Attilan's Royal Family. Medusa's parents elected to expose her to the mutagenic Terrigen Mist when she was an infant; the process endowed her with hair she could animate like added appendages. While still an adolescent, she began to make frequent visits to the isolation cell of her second cousin, Black Bolt, and learned to communicate with him in a special sign language. Medusa and Black Bolt developed a bond that blossomed into love when Black Bolt was first allowed out of his cell at age 18.

When the Alpha Primitive worker race revolted, Medusa battled their leaders, the Trikon. Her sky sled crashed in the fight and she became an amnesiac wanderer, until the Wizard found her on a small Mediterranean Island, fighting French soldiers. As he was creating an evil version of the Fantastic Four, he needed a woman to join his Frightful Four. Medusa readily agreed and filled out the evil foursome as they tried many times to embarrass and defeat the Fantastic Four. Though they were unsuccessful, their exploits brought Medusa to the attention of her Inhuman family who pursued her. Soon, her cousin Gorgon appeared and chased her along with the Human Torch, who she had forced to help her. A fight between the Torch and Medusa awakened the imprisoned Dragon Man, who associated Medusa with the Invisible Girl, who had previously been kind to him. He protected Medusa against Gorgon and the Fantastic Four, until he later captured the Invisible Girl, which distracted the four enough for Gorgon to capture Medusa and bring her back to Black Bolt and her family.

She soon stopped fighting her fellow Inhumans, and joined them in a fight against the Fantastic Four, who arrived to save the Torch; who had fallen in love with Medusa’s sister, Crystal. But when Crystal announced that Triton had been captured by the Seeker, Medusa gathered around her family and teleported with them to Attilan, using Lockjaw. Once there, Maximus gloated over his theft of the crown, due to Black Bolt’s “accidental” loss of his voice. Medusa and he both knew that Black Bolt secretly couldn't use his voice, as it was too dangerous, but when she hinted at this he ignored her and claimed her as his future bride. Black Bolt was not impressed by his show of power, and he tore the Inhuman crown from Maximus’ hands, reclaiming his place as leader of the Inhumans, and Medusa's betrothed. But shortly afterwards, when the Fantastic Four arrived and the Torch reunited with Crystal, Maximus fired his atmo-gun, trying to destroy all of humanity. When his machine didn’t work, Medusa realized that it proved Inhumans and humans were of the same race, which infuriated Maximus. He went out of control and reversed his machine, creating a Negative Zone around Attilan that trapped Medusa and the rest of the Inhumans within the refuge, while the Fantastic Four narrowly escaped. Soon, Black Bolt was faced with no other choice but to use his powerful voice, revealing his secret, in order to destroy the barrier surrounding Attilan.

The Council of Elders, in agreement with Black Bolt, later sent Medusa and the royal family back to study human society, where Medusa's own ego led her into conflict with Spider-Man. Medusa was shortly captured by Maximus, who retook the Inhuman crown and imprisoned Black Bolt and the royal family. But Black Bolt used his powerful voice, once more, and freed them to send his brother scurrying away in a hidden rocket. She briefly left Attilan on her own in an attempt to restore Black Bolt's vocal cords and again, under the Enchantress' influence, to join the Lady Liberators. When Sue Richards left the Fantastic Four, Medusa took her place. After serving with the team for several months, Medusa encouraged the Richards' to reconcile, freeing Medusa to return to Attilan as Sue rejoined the Four.

The Royal Family went through troubled times, from banishment at the hands of Maximus to poisoning from Earth's pollution, but Medusa remained the public face of the Inhumans, the interpreter for mute Black Bolt. After Attilan was moved to the Blue Area of the Moon, she and Black Bolt were married, making Medusa queen. When Medusa became pregnant a few months later, Attilan's Genetics Council argued that the mating was unfit (due to the instability of Black Bolt's brother, Maximus) and ordered the pregnancy terminated. Medusa fled to Earth, living in the desert until the child was born. Returning to Attilan, Medusa turned her son over to the Genetics Council, which in turn smuggled him to Earth for testing. Learning of this, Medusa pursued the child; when this exposed a grab for power by the Genetics Council, both the Royal Family and the Genetics Council gave up leadership, though the Royal Family was soon forced to resume leadership. Currently, Medusa, the Royal Family, and the remaining Inhumans have returned to the Blue Area of the Moon, where they are rebuilding Attilan. Medusa has led an effort to bring Inhumans and humans together, beginning with a cultural exchange between the two societies' children.