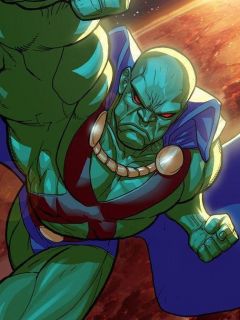 Centuries ago on the planet Ma'aleca'andra, the Green Martians known as M'yrnn and Sha'sheen gave birth to twin sons. The bearing of twins was uncommon among the Martian culture, and as such, the first of the twins was named J'onn J'onzz, whose name means "Light to the Light". J'onn's brother however, was born a mutant, bereft of a Martian's innate ability to communicate telepathically. He was named Ma'alefa'ak, whose named means "Darkness in the Heart".

As an adult, J'onn became a Manhunter (police officer) and married a Martian woman named M'yri'ah. The two established a modest home for themselves beneath the windswept Martian plains and gave birth to a daughter named K'hym.

Years passed, and J'onn's brother Ma'alefa'ak grew to despise everything about Martian culture. In an ambitious endeavor to commit full-scale genocide against his own people, he engineered a contagious virus known as H'ronmeer's Curse. The virus reacted to telepathic energy, and carried from one Martian to the next whenever they elected to use their psionic powers. The plague responded to a Martian's innate fear of fire, causing them psychosomatic stress so intense, that their bodies and minds would literally burst into flame. J'onn desperately tried to keep his wife and daughter from using their mental gifts, but they were unable and so, contracted the plague. K'hym was the first to experience the symptoms, and M'yri'ah followed soon after. J'onn was anguished as he watched his family burning to death before his very eyes. The trauma of the event shattered his psyche, and nearly drove him mad.

Meanwhile on the planet Earth, a would-be scientist named Dr. Saul Erdel developed a transmitter machine based upon ancient Martian technology. Seeking to make contact with extraterrestrial life, he aimed his device towards the vicinity of Mars and activated it. The transmitter beam streaked across both space and time, striking the Martian Manhunter at a point in time several centuries before Erdel would even be born. The beam brought J'onn back to Erdel's natural time era, where he collapsed on the ground outside of the Doctor's Colorado laboratory.

Erdel brought the distraught Martian inside and attempted to nurse him back to health. The anguish of J'onn's mental state created a psychic bond between the two, and Erdel became aware of the events that took place on Mars. In an effort to heal J'onn's mind, Erdel used the mental link to fabricate a new history for the Martian. He created a back-story inspired by the writings of famous science fiction novelists such as Ray Bradbury and Edgar Rice Burroughs. Eventually, J'onn's sanity was restored, and he was prepared to function in this strange new world. Erdel put the idea into his head, that he should become a great champion, and thus J'onn adopted the heroic guise of the Martian Manhunter.

J'onn J'onzz is accidentally teleported to Earth by a human scientist, Dr. Erdel, who immediately has a heart attack and dies, leaving the Martian stranded and unable to return. He is able to use his powers to fit in, adopting a human-like appearance and calling himself "John Jones". He joins the police force, secretly using his alien powers to help the inhabitants of his new planet. After he had given up his John Jones persona he became Marco Xavier in order to infiltrate the international crime cartel known as VULTURE. Early on, the Manhunter from Mars adopted a more characteristically superheroic modus operandi, openly fighting crime in a green-skinned form.

Later it was revealed that Mars was dead when J'onn was taken, killed by a mental plague deliberately started by his brother Ma'alefa'ak. He took the identity of the Bronze Wraith, and fought crime with the Justice Experience.

The Martian Manhunter's history is intimitely linked with that of the Justice League of America: He is a founding member of the team.

During the Justice League International years, J'onn is shown to be obsessed with Chocos, partially due to Captain Marvel's influence.

J'onzz reveals that his familiar appearance is not his true Martian form but a "compromise" between his true form and a human appearance - explaing that his real form is private and that, even on Mars, his "public" appearance was the familiar version.

In addition to serving in the League under his own identity, he also joins (under duress) as "Bloodwynd".

The Martian Manhunter is the most recognized hero in the Southern Hemisphere, and that he maintains a number of different secret identities, many of them outside the United States; however, following two incidents (in which John Jones separates from the Martian Manhunter), he decides to focus on his original human identity and retire the others.

Later, the Martian Manhunter attempts to conquer his fear of fire and makes a deal with a flame-wielding villainess named Scorch, who wants J'onzz' telepathic help in dealing with her own mental issues. 20,000 years before, an extremely dangerous race of beings called "the Burning", caused large fires to help themselves to reproduce asexually. In order to prevent the Burning from destroying much of the universe, the Guardians of the Universe split the species into the Green Martians and the White Martians, changed their reproductive behavior, and instilled in them a fear of fire. When the Martian Manhunter confronts his fear of fire, he reverts into one of the ancient creatures and changes his name to Fernus. His genetic memory identifies threats such as Vandal Savage, who killed one of the Burning on ancient Earth. This same genetic memory also makes Fernus hate the Green Lantern, due to his association with the Oans.

Fernus increases the strength of the powers he inherits from J'onn: For example, he can phase other beings rather than just himself, and he has access to pyrokinesis. He can breathe fire of such intensity it harms Scorch, who had previously been thought immune to damage from fire. Fernus' tremendous strength also allows him to dominate the Justice League in combat even without his Martian telepathic powers. He can also heal himself from almost total destruction within seconds.

The Justice League eventually defeats Fernus by re-enlisting Plastic Man, who is immune to Fernus' psychic powers and has superior shape-changing abilities. It is implied that Batman recruited Plastic Man to the Justice League as a balance in case the Martian Manhunter ever goes out of control.

After destroying Fernus, J'onn grieves for Scorch, who had fallen into coma, and with whom he had fallen in love. J'onn later tells Superman that his aversion to fire has changed: he is now invulnerable to flames unless they are "flames of passion" or of some other "psychic significance".

The Martian Manhunter in his current formAlthough J'onzz is initially thought killed in the explosion of the Justice League Watchtower, Justice League member Manitou Dawn receives a telepathic vision of J'onzz assuring her that he "will reveal himself, in time" but needs her help to keep an eye on a mysterious, newly-powerful telepath - the mind-controlling villain Key - whose abilities he had always managed to dampen before.

J'onzz resurfaces during Infinite Crisis, unconscious and connected to Alexander Luthor, Jr.'s vibrational tower, along with Lady Quark, the Ray, Black Adam, Power Girl, Nightshade, and Breach. Wonder Girl, Superboy, and Nightwing free J'onzz and the others from Alexander's tower.

Oracle asks J'onzz to telepathically coordinate the heroes' response to the Society's global jailbreak. He joins the assembled heroes in the defense of Metropolis from the combined might of the world's supervillains and in the battle against Superboy-Prime.

In the following months, J'Onn masqueraded as U.S. Secretary of State Kakalios in an attempt to bring down Checkmate. He was successful in eliminating it as a U.S. government-controlled agency. However, it soon reorganized under the United Nations.

One of the most dramatic changes in J'onn's life occurred a short time later. While operating under the guise of William Dyer, he discovered that several Green Martians had crash-landed on Earth, and were being held by high-ranking members of the Defense Department. One of the Martians, Roh'kar, broke free of his confinement and made contact with the Martian Manhunter. The union was bittersweet however, as brainwashed assassin ended Roh'kar's life with a weapon designed to target Martians. J'onn found five of Roh'kar's colleagues and rescued them from the bowels of a government think tank. He established a safe house for them and pledged to do everything in his power to keep them safe from government scrutiny.
Superhero Class