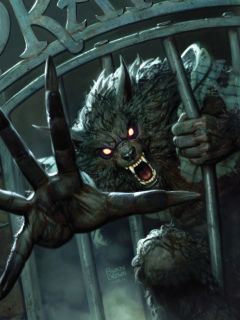 John Jameson, son of newspaper mogul J. Jonah Jameson, was one of the youngest applicants to ever be accepted into NASA's astronaut program. During his first mission, in which he orbited Earth, Jameson's capsule developed a faulty guidance module which caused the craft to spin out of control. The fledgling adventurer, Spider-Man, who had just begun his career weeks earlier, managed to rescue Jameson by getting a replacement guidance module to the plummeting capsule. This incident, which Jameson's father construed as a publicity stunt to upstage his son's accomplishment, provoked the one of elder Jameson's first editorial denouncements of Spider-Man.

On a later space mission, Jameson somehow contracted an unknown virus presumably during a space walk. Upon his return to Earth, Jameson began to develop superhuman strength as a side effect of the virus. Jameson was given a special body suit designed to keep his strength in check by scientists at NASA. When it appeared that Spider-Man was involved in a bank robbery, J. Jonah Jameson persuaded his son to use his strength to subdue the web-slinger and thus become a public hero. John Jameson agreed but was bettered by Spider-Man in their first encounter. When the elder Jameson learned Spider-Man was innocent, he tried to stop his son from proceeding in his battle, but John Jameson sought a rematch after his earlier defeat. When the two clashed a second time, Spider-Man managed to neutralize the virus in Jameson's body by a high dosage of electricity. When Jameson recovered, his strength was no longer superhuman. Some time later, Jameson was selected to go on a secret mission to the moon, the reason for which is still classified information. While collecting lunar rock samples, he came across a glittering red gemstone, unlike anything else he had seen there. At the successful completion of the mission, Jameson felt a strange compulsion to possess the unique gemstone, and with the assistance of a colleague, Jameson had it recovered from quarantine and made into a pendant. Jameson was wearing it around his throat on the first night of a full moon when lunar luminescence reacted with the pendant, causing him to transform into a wolf like humanoid creature.

For months, Jameson tried to find a way to fight the three nights of transformation; finally acquiring a radiation suit he hoped would screen out the moon's rays. It failed like all his other attempts. In his native New York City on the first night of his fifth month of his transformations, Jameson began to stalk his own father in an instinctive quest for help. The elder Jameson was shocked by the seeming attack of the Man-Wolf, and suspected the creature was in partnership with Spider-Man, who happened by in time to fight the werewolf. Then J. Jonah Jameson saw the pendant around the Man-Wolf's neck and recognized it as his son's. Confronting his son with his suspicions the next day, the elder Jameson learned of his son's strange plight, and discovered that his son could not end it by removing the pendant since it had somehow grafted itself to his skin. Soon, however, as the Man-Wolf grappled with Spider-Man, the costumed crimefighter tore the pendant from Man-Wolf's throat, unaware of its connection. Although it would take months before the injury to his throat would heal, John Jameson was cured of his lunar-triggered transformations. Spider-Man threw the pendant into the Hudson River.

Not long after his throat healed, John Jameson was again afflicted by the curse of the Man-Wolf when Michael Morbius, a scientist with a blood disease that gave him artificial vampiric powers, recovered the gemstone and exposed Jameson to it. Jameson reverted to his wolf like form, and in that state Morbius placed the gemstone around his neck once more. Morbius hoped to use the Man-Wolf as his pawn in a scheme to cure himself of his vampiric affliction, but that scheme was thwarted by Spider-Man. Both Morbius and the Man-Wolf managed to escape. Again afflicted by monthly transformations, the Man-Wolf's rampages attracted the attention of the police department, who assigned special investigator Simon Stroud to the case. Stroud suspected that the Man-Wolf was Jameson, but kept his suspicions to himself. Managing to escape from New York and the authorities, Jameson hitchhiked to Georgia where he became involved in a skirmish between SHIELD and the original Hate-Monger.

SHIELD Director Nick Fury escorted Jameson to NASA headquarters where he was wanted being absent without leave. NASA officials offered to drop changes against him if he agreed to perform communications breakdown with an orbiting space station. Jameson agreed, and upon his arrival at the space station, learned that the installation had been boarded by three extradimentional humanoids named Garth, Lambert, and Gorjoon. The invaders revealed to Jameson that they had come from the dimension in which his gemstone originated. Jameson agreed to accompany them to the moon where the portal to their world, 'Other-Realm,'was located.

Crash-landing on the moon, Jameson, now permanently the Man-Wolf due to direct exposure to the moon's rays, found the portal to 'Other-Realm.' To his amazement, he discovered that in this other dimension, he retained his human intelligence while in wolf form. He was then told the origan of the gemstone. It was an artifact created by the ruler of the 'Other-Realm,' a being known as Stargod. When Stargod felt himself dying, he opened a portal to Earth's moon and went there to die, channeling his godly essence into the jewel. When the 'Other-Realm' faced a crisis of dire consequences, he arranged that the gemstone would be found, and a successor possessing his godly might would come to deliver his world from evil. Jameson seemed to be that chosen successor. However, since the mystical radiation that leaked through the moon portal was so weak by the time it reached Earth, the gemstone was only able to effect a partial change to the mythic wolf-being. Thus Jameson had gained Stargod's strength and outward form but not his wisdom or power. As Stargod's successor, Jameson helped the denizens of the 'Other-Realm' vanquish its would-be conqueror Arisen Tyrk, utilizing the full power of Stargod. Jameson then utilized the gem's full power to teleport him back to Earth.

On Earth, Jameson found himself to be at the mercy of the partial effects of the gemstone, again transforming into a wolf against his will. Furthermore, since he had exhausted the gemstone's power in fulfilling its purpose, it was slowly turning into a malignant organism, sinking beneath the surface of his skin and poisoning him. When his father J. Jonah Jameson learned of his latest plight, he had his son placed in cryogenic suspension, in hopes of arresting the process. An enemy of Jameson's, Spencer Staythe, released the younger Jameson, hoping to hurt Jameson or his son. Spider-Man managed to quell the Man-Wolf's rampage, but lost track of the creature when he was snatched by Smythe's teleport beam. When John Jameson returned months later, Spider-Man enlisted the aid of Dr. Curt Connors and the two managed to give Jameson a radiation treatment that caused the gemstone to withdraw its root system and be rejected by Jameson's body. When the gemstone crumbled to powder, Jameson was finally free of his strange ordeal. For a time he was in a sanitarium due to the strains of what he had suffered in his life, but he is now recovering. Jameson's current activities are unrevealed.
Superhero Class