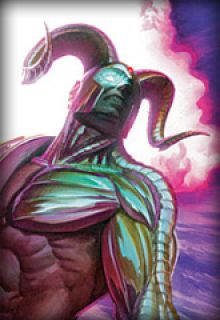 Lance Corporal David Reid, great-grandson of Franklin D. Roosevelt, was with the Marine platoon assigned to halt the looting of the National Museum of Iraq during the Iraq War. Reid tracked one of the looters and found an artifact; upon touching it, Reid blacked out, waking up three weeks later to find that he was now filled with plasma energy and that a mark shaped like the Eye of Providence had opened up on his left arm. With the aid of a pointed hand-held device (which got him the nickname “Lance”), Reid was able to project focused blasts of energy.

Because the modern Justice Society of America tries to keep the legacies of former heroes alive, and because Franklin Roosevelt was credited with bringing the JSA together in the first place, the Society asked Reid to join them.

David Reid was recently killed by members of the African Congo Army who successfully destroyed his energy lance. Reid was revived by Gog in the recreated format of Magog. It is presently unclear how similar or different Reid is after dying and being revived to his former personality and memories.