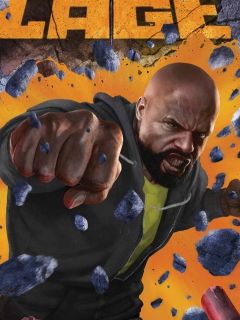 Cage's muscles generate less fatigue toxins than the muscles of ordinary humans, granting him superhuman stamina. He can exert himself at peak capacity for about 24 hours before fatigue begins to affect him.

Luke cage's skin is as hard as titanium steel and his muscle and bone tissues are considerably denser than the tissues of an ordinary human, granting him much greater resistance to physical injury than an ordinary human. He can withstand conventional handgun fire at a range of 4 feet and cannot be cut by any blade forged of conventional material, although in the event of required surgery his skin can be lacerated by an overpowered medical laser. He can withstand up to one-ton impacts or blasts of 150 pounds of TNT without serious injury, and is highly resistant to extreme temperatures and electrical shocks. His current level of durability enables him to withstand gun fire at point-blank range, and can withstand being lit on fire without suffering any serious or permanent injuries. He has withstood impacts from superhumans a good deal stronger stronger than him, destructive energy attacks including electricity, and falls from great heights such as ninety story high skyscrapers.

Despite his superhuman durability, it is possible for Cage to be hurt. If injured, he is capable of recovering from mild injuries in 1/3rd the time it would take an ordinary human.

Cage is a self-taught hand-to-hand combatant with years of street fighting experience. He also says he has had extensive training with Iron Fist.

He is also a gifted athlete, even without his superhuman abilities.

Cage is self-educated in the law and speaks several languages.

He has proven to be very good at speaking positively, truthfully, and charismatically in front of large audiences. His innate nobility has earned him the respect and friendship from a good number of different persons.