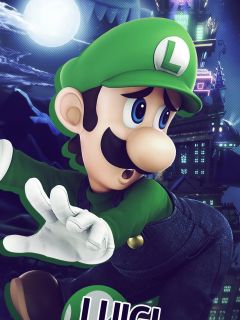 Mario and Luigi meet each other again, the first documented time since their childhood. They work as plumbers inside the sewers of New York.

Mario and Luigi heard about Bowser summoning dark magic into the Mushroom World. Bowser transformed Toads into inanimate objects. Princess Peach can undo the spell, but Bowser kidnapped her. Luigi defeated Bowser and rescued Peach, who assigned him a new quest.

Luigi, Mario, Peach, and Toad had a picnic near the cave. Mario shared his dream with his friends, and they claimed to have the same dream. The group was keen to look through the cave and found a stairway leading to the door. When Luigi opened the door, he saw Subcon and fell into the world of their dreams. Luigi journeyed Subcon to encounter Wart. Luigi used vegetables to defeat Wart. Upon his defeat, Luigi rescued the Subcon. Mario, Luigi, Toad, and Peach celebrated with the Subcon.

Although Luigi did not enter the contest, he won a mansion. He arrived in Boo Woods and enters the mansion. A ghost attacked Luigi, but Professor Elvin Gadd saved Luigi by vacuuming the ghost with the Poltergust 3000. Professor E. Gadd escorted Luigi to his laboratory. E. Gadd told Luigi that King Boo trapped Mario into a painting. E. Gadd gave Luigi the Poltergust 3000 and the Game Boy Horror for Luigi to communicate with E. Gadd.

As Luigi explored the mansion, he realized that King Boo built the mansion to shelter the freed portrait ghosts and made a false contest to lure him and Mario to King Boo's trap. After capturing all the ghosts, Luigi entered the secret altar in the basement to find King Boo who trapped Mario in the painting. King Boo proceeded to fight Luigi inside the painting. Luigi removed the Bowser suit's head to capture King Boo. Luigi successfully exited the painting. E. Gadd talked to Luigi through Game Boy Horror; E. Gadd instructed Luigi to grab the painting of Mario and return to his laboratory. After Luigi did so, he returned to the laboratory. E. Gadd used the Ghost Portrificationizer to transform the remaining ghosts into portraits but used the machine in reverse to free Mario.

E. Gadd was proud of Luigi for collecting the treasure to build Luigi a new house.

Bowser kidnapped Mario, Luigi, and the Toads while Princess Peach, Toadsworth, and Toad were strolling. Army Hammer Bro help him captive in the cage. Upon Peach, Toadsworth, and Toad's arrival, they found out that Bowser kidnapped them, witnessing Toads with different emotions. Peach was determined to rescue the brothers and Toads. Toadsworth gave Peach an unordinary umbrella named Perry. Perry assisted Peach in Vibe Island. After rescuing Toads, Peach and Perry went to Giddy Sky to find Kamek trapping Luigi in a bubble. After rescuing Luigi, the duo went the Bowser's villa and confronted Army Hammer Bro and Bowser. Defeating both of them, Perry freed Mario. Peach, Perry, Toads, Mario, and Luigi left the island and returned to the Mushroom Kingdom.

Luigi participated in the Starbit Festival while Mario was running to Peach's castle. However, Bowser and his troop crashed the festival. The Koopa troop separates Mario from Peach and everyone else into different galaxies. Mario found the Toad Brigade in Honeyhive Galaxy, who told Mario that they lost Luigi. After collecting the second Grand Star, Mario went to the kitchen and arrived at Ghostly Galaxy. Toads told Mario that they found Luigi trapped in a haunted mansion. Mario explored the mansion and went through the gates to rescue Luigi. Luigi gave Mario the Power Star and they return to the Comet Observatory.

The foursome rescued the Sprixie Princesses again from Bowser as Meowser. Mario, Luigi, Peach, and Toad returned to the Mushroom Kingdom.