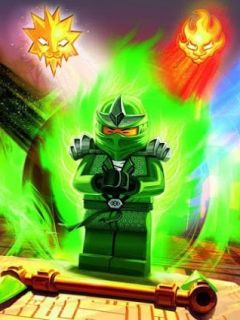 Lloyd is the son of Lord Garmadon and Misako. The soon-to-be dark lord was filled with pride for his newborn son, and wanted Lloyd to follow a different path from his own. The family was happy for a time, but one day Garmadon finally lost control over the evil within him, and was banished to the Underworld. Lloyd was too young to remember Garmadon, but he had heard of him, and was fond of his evil father, wanting to follow in his footsteps, unaware that Garmadon did not. Once he was old enough, Misako sent him to the Darkley's School for Bad Boys. On his first day at Darkley's School, everyone made fun of Lloyd, and Brad put fire ants in his bed. After everyone left, Brad took him under his wing and taught him the art of revenge.

One day, he had received a package from his "grandmummy" when another student named Finn took it from him and turned it into worms. Lloyd was expelled from school that same day because he didn't have the "amoral ambition to become one of tomorrow's masterminds." Before he left, he stole a cape and hood from a closet, planning to become an evil overlord by himself.Lloyd arrived in Jamanakai Village where he attempted to steal all of the candy, but was stopped and humiliated by the Ninja in front of the villagers. Later when he was walking in the Glacier Barrens, he stumbled upon the Hypnobrai Tomb. After gaining command of the Hypnobrai, he led them on an attack of Jamanakai Village, only to be stopped by the Ninja once more. Lloyd then turned his army's attention to constructing a fortress in the heart of Wildwood Forest, though it was quickly discovered and destroyed by the Ninja. During the Ninjas' attack, Skales took command of the Hypnobrai and after defeating Slithraa in a Slither Pit fight, the new General banished Lloyd.

Using a map he had stolen from the Hypnobrai Tomb, Lloyd set out to find the Fangpyre Tomb which he planned to unleash to get revenge on the Hypnobrai for betraying him. Though the Fangpyre was eager to help him, they insisted on first rebuilding their army. Traveling to Ed & Edna's Scrap N Junk, Lloyd witnessed the Fangpyre use their venom to turn old vehicles into attack machines, though they were forced to flee when the Ninja arrived.

With their army ready, Lloyd accompanied the Fangpyre into battle against the Hypnobrai. Unfortunately for Lloyd, Fangtom and Skales were old friends and a truce was called, forcing Lloyd to flee once more. Knowing that all the other tribes feared the Anacondrai, Lloyd traveled to the Anacondrai Tomb only to find that a single one of these snakes remained—Pythor. Nevertheless, Pythor agreed to be Lloyd's minion and they spent the day carrying out petty crimes. At his new minion's suggestion, Lloyd and Pythor attacked Darkley's Boarding School for Bad Boys in revenge for them kicking him out. However when the Ninja arrived, Pythor showed his true colors by stealing the Map of Dens and fleeing, leaving Lloyd to be captured by the Ninja. Lloyd was then told a bedtime story by his Uncle Wu, explaining why one shouldn't trust a snake.

Now living with the Ninja, Lloyd aided his uncle in one of the Ninjas' daily lessons by pulling pranks on them (such as placing Zane's clothes with Kai's in the wash, thereby turning them pink, messing with one of Jay's inventions, etc.) and blaming it on the other Ninja.In the aftermath of the Devourer's defeat, the Ninja moved into an apartment in Ninjago City. Although their spacious new home had a training course for Lloyd, he was unable to receive any personal guidance from the Ninja as they all had to all work jobs to pay the rent. After Lloyd was nearly abducted by Skales, the Ninja decided to downsize to a more affordable apartment. Although the Ninja were now able to oversee Lloyd's training, they soon realized that their cramped apartment was unsuitable and began using Grand Sensei Dareth's Mojo Dojo as training grounds. When Captain Soto and his pirates attacked Ninjago City, Lloyd was ordered by the Ninja to stay behind, but the little Green Ninja used the Ultra Dragon to board the ship, performing Spinjitzu for the first time during the battle.

Soon after, Lloyd was invited back to his old boarding school to receive an honor. Upon arriving at the school, Lloyd discovered that it was merely a ploy by his old classmates who captured him and attempted to turn him evil again. When Garmadon's Bizarro Ninja arrived, Lloyd managed to convince his classmates to help the Ninja defeat their fake counterparts. When the Ninja entered the Ninjaball Run to save Dareth's dojo from being destroyed, Lloyd entered the race with the Ultra Dragon. Although he was unable to reach the finish line, Lloyd did manage to stop Garmadon from destroying the Ninja mid-race.

When the Ninja were turned into kids by Garmadon's Mega-Weapon, Lloyd took them to Ninjago Doomsday Comix to find information about the Grundle, a Ninja-hunting creature, that the effects of the Mega Weapon brought back to life. As a result of using Tomorrow Tea to defeat the Grundle, Lloyd was aged significantly, prompting the final battle to draw closer. Now older, Lloyd began to take his training more seriously and confronted his father with the other Ninja in the Lost City of Ouroboros. As a result of the Ninja following Garmadon back in time, destroying the Mega Weapon with their own Golden Weapons making sure it never happened, Lloyd's knowledge of the Mega Weapon was erased.

Some time after, Lloyd and the other Ninja were summoned to the Ninjago Museum of History as the venom of the Great Devourer had brought the Stone Army merchandise to life. After the Ninja had taken care of the problem, Lloyd was reunited with his mother Misako, though still angry she left him so many years ago, he stormed away. Misako caught up to him and revealed the story of the Overlord.Following the Overlord's defeat, Lloyd traveled Ninjago accepting medals and achievements as the Golden Ninja for his victory. His father also abandoned the title of Lord and began going by Master Garmadon, and swore an oath of nonviolence. Lloyd realizes that Ultra Dragon is feeling homesick. They flew to the Spirit Coves and Lloyd chose to set him free.Lloyd heard word from Nya that the Ninja were in trouble, and raced to New Ninjago City on his Golden Elemental Dragon to help. He used his Golden Power to temporarily disable the Security Mechs and reunited with the Ninja. Their reunion was quickly interrupted by the revived Digital Overlord, whom Lloyd declared that since he defeated him once, he could defeat him again. As the Security Mechs powered up, the Overlord stated that he didn't want to fight, he only wanted the Golden Ninja's power. Lloyd prepared to attack the mechs again, but was stopped by Wu who realized that the golden power was only making them stronger. Their master then ordered the Ninja to flee the city while he tricked the Overlord, and Lloyd rode the Golden Dragon away.