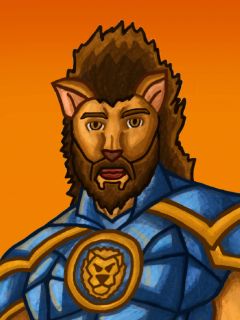 There was a universe, almost identical to our own, same planets, same solar systems, same galaxies the only difference was the inhabitants, they were superhuman in our eyes and they were called Evolutionary Humans, they were humans, who evolved through time, they were more powerful than ordinary humans because they developed superpowers, through training or trauma, they could become extremely powerful as their abilities grew.

Their universe was nearing the end due to overuse of quantum computers, their technology, even though millennia more advanced than ours, could do little to nothing in relation to rebuilding said universe, the damage was done because of oblivion and arrogance.

Lionman belongs to the Omega Reality, the Omega Reality is a Reality almost identical to our universe in every way, the inhabitants are filled with superpowers that ranges from street level, to cosmic level, that was until the Evolutionary Humans from a baron Reality migrated for their survival.

The Ultravox of that time, over used these quantum computers, which altered the Reality to which he saw fit, but he didn't account for all the variables and he was accidentally destroying the Realities.

His son however, the present Ultravox as a teenager could use them without damaging the Reality, But the leader of a secret society Exodius, (Word pun on Exodus) wanted the race to follow him, so he fought and eventually killed the original Ultravox, but he was locked up. , Peter, who's our Ultravox, became King early.

But Exodus had a plan, he cloned Ultravox's son, Peter, to make the perfect evil leader, in case he dies or gets locked up... This clone was known as Ultravox X.

He fought against the villains for years before being able to at the last legs of the Reality, transport his people to another Reality.

So Peter took the reigns of Ultravox and finished the quantum computers, but as the race migrated and arrived on the new Earth, the enemy followed.

He unfortunately brought the war to the Earth, after years of battling, sacrifices from human and Evolutionary Human alike, the heroes won, and thus Ultravox started global repairs and reperations, eventually becoming the emperor of Oceania becoming a global super power.

Ultravox befriended the Earths leaders and managed to secure a place for him to rule over, which is known on our earth as Victora, but it was changed to Pinnacle City.

But there was more evil lurking, Ultravox X was planning Exodus's escape, and Exodus's master, Morganeth sworn pain on Ultravox's family line because Morganeth was the immortal sworn enemy of the original Ultravox.

At the age of 15, Daniel started having blackouts when in danger, he performed feats he shouldn't have been able to do, he decided to leave for training, he went to the Marenza Mountains, to scale the extremely tall mountain to train with the legendary Master Zyiang Zyung, this master would train Daniel in hopes of unlocking his Evolutionary Genes.

He trained there for months before the tyrant Morganeth tracked down Daniel and killed his Master brutally, he then tortured Daniel and threw Daniel off a mountain when he thought Daniel to be dead.

Daniel was retrieved by a Ninja Clan to train him further once he was healed, Daniel earned the ultimate elixir, once you drink this your body becomes it's physical peak, once he finished with the ninja clan they let him go separate ways to further train.

Daniel cross paths with the Extingiush Agency, a group formed to deal with Evolutionary Villians, he trained there and learnt to deal with evil super powered villains and how to take them out.

He trained for about a year before he was allowed to come back to Pinnacle City, where he joined his father's team.

He then stayed on that team for about a year before started having blackouts again, he left the team to expiriment on himself to try to stop these blackouts.

He came across bio-chemistry and used Lion genes to mix with his own, and through this, it created an incredibly powerful transformation, the Lionman

He worked solo for a couple years before finally rejoining the team and gaining two sidekicks, Meltdown and Tyranissus, he then started his own team a couple years from that.

And now were in present time.