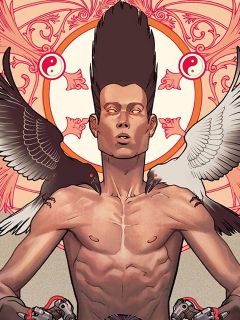 Legion is an immensely powerful Omega-Level mutant suffering from Dissociative Identity Disorder, with each persona manifesting and controlling a different superhuman ability. Originally only psychic in nature, David's powers now include physical mutants.

To date, he has displayed telepathy, telekinesis, pyrokinesis, shape-shifting, time-travel, teleportation, superhuman strength, sonic blasts, flight, a prehensile tongue, X-ray vision, super speed, inter-reality and interstellar travel, creating a field of absolute absence of heat and love, skin manipulation, healing, lycanthropy, transmutation to salt, omniscience, time control, duplicate generation upon physical contact, weapon's mastery, emotion manipulation, pain transference ("living voodoo doll"), spirit absorption / body control, generation of armor made from various substances, teleportation to the presence of specific people rather than location and the ability to restructure all of reality. The specifications and limits of each power has never been made known or tested.

Legion is able to access the memories and knowledge of every consciousness that has taken control of his body, including the military and hand-to-hand combat training of Jermail Karami.

Using a helmet or wrist-mounted device, created by Dr. Nemesis with aid from Reed Richards and Madison Jeffries, Legion is able to choose a particular persona's power to utilize; these devices theoretically keep the persona from claiming permanent dominance of David's mind and body.

When his mind is whole and intact David can use any of his powers at will or even multiple powers at the same time. However, there are only a few instances when his mind has been united enough to do so, namely the times when he was possessed by the Shadow King and the time when his mind was healed after emerging from a coma at the beginning of Legion Quest.

He also wields a psychic knife that hurts mentally as he focuses on using its psychic powers. He can create psychic blasts which are comparable to concussive blasts, though attacking the minds of its target.

Legion can also convert himself into an astral form which enables him to travel through astral planes and create psychic weapons. He can also teleport and travel through time.

After the events in Colorado, the X-Men used a device to flatline David's brainwaves to get him to San Francisco, where they began psychically sequestering and cataloguing his personas in psychic "cells" - to date, seven psychic surgeries have contained 53% of his personas. The X-Club believe once healed Legion maybe able to cause spontaneous mutations, serving as a cure for mutats whose X-gene has been dormant since "M-Day" depowered the majority of mutantkind.

Some of his powers and their respective personas are as follows.

Jack Wayne - While in this form, Legion can levitate materials using his mind which have the limit of levitating up to 10 tons. He also uses this to create protective force fields. Jack Wayne, along with several other personalities, was apparently killed by Magik's soulsword in the first arc of the current New Mutants series, the "Return of Legion".

Jemail Karami- While using this personality he can read other people's thought's and see inside their minds.

X- This personality appeared for the first time in "Age Of X", where she took the form of Moira MacTaggert and warped reality to create a world where mutants were hunted to near-extinction by humans. Legion was able to successfully reabsorb her into his psyche, and restore reality to normal. Whether X remains a threat remains to be seen.

Time Sink- One of the rogue personas that breaks free of Legion's mind in "Lost Legion". Time Sink can manipulate the flow of time with ease, as seen when he paused time in Frenzy's frame of reference and froze Magneto for 2 minutes. He was also able to torment Gambit by showing him memories of his troubled past. He was defeated by Rogue and reabsorbed by Legion.

Chain- One of the rogue personas that breaks free of Legion's mind in "Lost Legion". Chain is a living virus who can turn anyone he touches into a copy of himself, and all the duplicated Chains are subservient to the main Chain. If the main Chain is defeated, all the duplicates return to normal. The more copies of Chain there are, the harder it becomes for even skilled telepaths like Professor X to read his mind. He was defeated and reabsorbed by Legion.

Susan In Sunshine- One of the rogue personas that breaks free of Legion's mind in "Lost Legion". Susan is a little girl who can manipulate ambient emotions in any way she pleases. She can amplify them, reduce them or convert them into energy. She can induce feelings of attraction, hatred and depression in other people. Legion stated that her powers would dissipate if she ever got depressed herself. She was defeated by Frenzy and reabsorbed by Legion.

The Bleeding Image- One of the rogue personas that breaks free of Legion's mind in "Lost Legion". The Bleeding Image can create pain in others equivalent to what he does to himself. For example, when he stabbed himself in the shoulder, Rogue's shoulder felt like it had been stabbed as well. His power can create pain, but not actual damage. He was the only one of the rogue personas not reabsorbed, as he committed suicide by blowing himself up.

Endgame- One of the rogue personas that breaks free of Legion's mind in "Lost Legion". Endgame does not seem to possess a human body, but occupies a colossal suit of armor that adapts to overcome any threat that presents itself. He was defeated by Magneto and reabsorbed by Legion.

Styx- One of the rogue personas that breaks free of Legion's mind in "Lost Legion". Styx is quite possibly the deadliest of Legion's many personas. He is a skeletal demon that can absorb a person's soul with a touch and take command of their consciousness, including all their skills and abilities. He was able to take command of Xavier's telepathy after touching him. He was defeated by Xavier and Rogue and reabsorbed by Legion.

Sally- An obese, lonely woman with Hulk-like super strength and the ability to increase her muscle mass.

The Origamist - A colossal sumo wrestler whom Legion ranks among his top ten most powerful personalities, the Origamist can bend and warp the fabric of space. He has been used only once so far; when Legion was in danger from an explosion he used the Origamist's powers to fold the explosion away into a separate dimension and teleport away from the scene.

Johnny Gomorrah- Can turn objects and enemies into salt.

Delphic- A blue skinned young woman who will answer any three questions to supplicants using her powers as a seer.

The Nazi Doctor- A blond, monocled Nazi doctor with a thick German accent, who can disrupt or negate mutant abilities with a touch.

Specs- A nervous young man with large glasses, who can see through solid objects.

Stutter - A young man with a stutter as well as physical deformities. He is capable of self-propelled flight.

The Wolfman- An older man wearing a dhoti and handcuffs, who can transform into a werewolf. He also possesses a healing factor.

Compass Rose- As opposed to the standard teleportation to places employed by the likes of Nightcrawler, Rose can teleport to people, no matter how far away they are. Rogue uses this ability to teleport billions of miles into space to find Rachel, after the events of "Lost Legion".