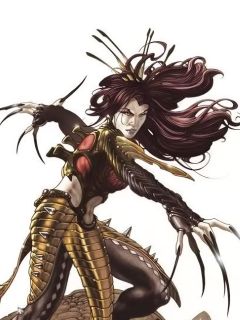 Yuriko Oyama is the daughter of Kenji Oyama, a former Japanese kamikaze pilot during World War II, whose face was horribly scarred in a failed suicide attack on an American battleship. Later becoming the head of Oyama Heavy Industries, Kenji had Yuriko and her two brothers privately tutored by Marcy Stryker, wife of an American soldier named William Stryker. Kenji felt much shamed by his failure decades earlier, and as a result he ultimately scarred the faces of his three children in a ritual design. Becoming the criminal scientist Lord Dark Wind, Kenji developed a means for bonding the virtually indestructible metal Adamantium to human bone, a procedure he hoped to use in creating an army of super-soldiers for Japan. However, his notes were stolen and it took him years to rediscover the process.

Growing to despise post-war Japanese civilization, Lord Dark Wind had the then-crippled assassin Bullseye brought to his island off the Japanese coast. There, Dark Wind replaced some of Bullseye's broken bones with Adamantium substitutes, hoping that in return Bullseye would assassinate Japan's minister of trade for him. Arriving in Japan intent on recapturing Bullseye, the blind costumed crimefighter Daredevil encountered Yuriko, who sought vengeance on her father, both for scarring her and for the deaths of her brothers, who had perished in Lord Dark Wind's service. Moreover, I the young man Yuriko loved, Kira, served in Dark Wind's private army, and she did not want her father to cause him harm. After Yuriko guided Daredevil to her father's private island, Bullseye escaped and Yuriko herself slew Lord Dark Wind just as he was about to kill Daredevil.

Following Daredevil's departure, Kira committed suicide in despair over Dark Wind's death. The shock of Kira's death radically altered Yukio's outlook on life, and she resolved to carry on her father's work. Yuriko became convinced that the mutant adventurer Wolverine had gained his Adamantium-laced skeleton by means of the process stolen from her father years earlier. Garbed as a female samurai and calling herself Lady Deathstrike, Yuriko led a number of her father's warriors to Canada where they confronted Wolverine, seeking to retrieve his Adamantium skeleton for study. She was defeated by Wolverine's long-time friend Heather Hudson, who had adopted the costumed identity of Vindicator in her role as leader of the Canadian super-team Alpha Flight.

Having failed to defeat Wolverine, Lady Deathstrike resolved to better fight him on his own terms and so struck a deal with Donald Pierce, the renegade White King of the elitist Hellfire Club, who had formed a band of cyborg mercenaries named the Reavers. Pierce had the extradimensional being named Spiral transform Deathstrike into a cyborg, healing her facial scars in the process. Now possessing superhuman strength and Adamantium claws to rival Wolverine's own, she led three other cyborgs in Pierce's employ - former Hellfire Club soldiers Cole, Macon, and Reese - in an attack on Wolverine, only to again meet defeat. Now interested only in vengeance, Deathstrike later joined Pierce and his Reavers in an ambush on Wolverine in a remote town in the Australian outback. Capturing him, they crucified him on an X-shaped cross and left him to die. Wolverine was rescued by the young mutant Jubilee, and after a brief clash with the Reavers, the pair escaped. Believing Wolverine had fled to the mutant research facility on Muir Island, the Reavers arrived and clashed with both a ragtag group of X-Men and the US government-sponsored Freedom Force team. After both sides suffered casualties, the tide of battle began to turn against them and the Reavers retreated.

Later hoping to succeed alone after her failures with a team, Deathstrike had the Reavers' former ally, the mutant aborigine Gateway, teleport her to Wolverine's location. At that moment, Wolverine had traveled back in time to Spain in 1937, so Deathstrike was also sent into the past. Caught in a skirmish during the Spanish Civil War, the pair subsequently fought their way through temporal distortion to return to the present, their battle unresolved. In a subsequent confrontation, Deathstrike learned that the self-styled mutant master of magnetism, Magneto, had forcibly removed the Adamantium from Wolverine's body. As a result, she lost interest in her quest and returned to the Reavers in search of purpose.

After an attack on the Reavers by giant robotic Sentinels summoned from the future by the time-traveling mutant villain Trevor Fitzroy, Pierce rebuilt the Reavers and led them in capturing Milo Thurman, a former government employee who possessed incredible natural prophetic abilities. Pierce intended to transform Thurman into a cyborg Reaver under his control, but his plan was opposed by Thurman's former lover, the mutant mercenary Domino. As Deathstrike battled Domino, Pierce downloaded almost 60% of Thurman's consciousness into his own mind before the Reavers' base was destroyed.

Later striking out on her own, Lady Deathstrike once again clashed with Wolverine but was possessed by the spirit of another of his nemeses, Ogun. Eventually abandoned by the spirit once it had learned from her how to infiltrate cybernetic systems, Deathstrike subsequently allied with the Japanese terrorist group Strikeforce Ukiyoe and they clashed with the super-soldier Captain America following his return from an extradimensional exile. She next found herself targeted by Prime Sentinels, mutant-hunting cyborgs under the command of the time-traveling villain Stryfe. Although not a mutant herself, Deathstrike unknowingly carried within her cybernetic programming the control codes for the more powerful Omega-class Sentinels. With the help of Wolverine and his teammates in the X-Men, Deathstrike defeated Stryfe and his forces. Despite their shared victory, Deathstrike's dislike for Wolverine endured, and she was subsequently recruited by Wolverine's arch-nemesis, the feral mutant Sabretooth, to assist him in striking at Wolverine's loved ones in exchange for valuable information. Deathstrike, alongside the Russian super-soldier Omega Red, crippled Wolverine's friend Yukio and abducted his ward, Amiko. Having obtained what he wanted, Sabretooth subsequently double-crossed Deathstrike and Omega Red, cheating them out of the information he had promised them.

Lady Deathstrike later went to the aid of her former associate William Stryker, who had since become a minister and led an anti-mutant crusade that resulted in his imprisonment due to the murderous actions of his Purifier soldiers. Breaking him out of government custody, Deathstrike gave him access to the resources of Oyama Heavy Industries. In the course of aiding Stryker in his efforts, she fell under the control of Paul, a sentient computer entity who sought to protect the community of mutants living in Mount Haven. Under Paul's control, Deathstrike fought both Stryker and the X-Men, once more dueling with Wolverine and, ironically, meeting more success under Paul's control than she ever had on her own. In the course of one clash, Deathstrike was buried beneath collapsing rubble, but when the X-Man Bishop investigated he found only her severed cybernetic arm. Deathstrike's current whereabouts and activities are unknown.