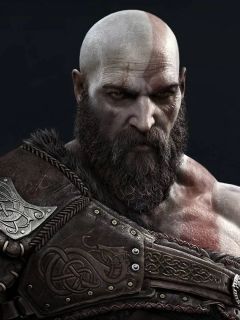 Kratos is the son of Zeus and Callisto. Kratos also has a younger brother named Deimos, Deimos was scarred by his broken house and was captured by Ares. Kratos got a red mark symbolizing Deimos' scar. When the rumors about his sire's identity grew so strong, his mother took Kratos to Sparta and receive training. He quickly become a Spartan general and although his tactics were brutal, they were efficient. But soon he learned that despite all his military power he was no match for Eastern Barbarians, numbered in the thousands, and his men fell one by one. As he was ready to be finished by the Barbarian King, Kratos pledged Ares the God of War and the Furies to save him,and kill his enemies. Kratos exchanged his soul for a victory. There are three blood oaths: the death of his enemy, the death of his enemies and the death of his brethren. Kratos became a living weapon, his swords attached to chains and burned to his forearms. He continued in the ways of war and death for Ares. But Ares deceived Kratos, and in his bloodlust Kratos killed Lysandra and Calliope. He was then cursed by a woman of the village, the ashes of his family forever turning his skin pale.

The Furies were sent by Ares to find Kratos who broke his oath. 6 months later, Kratos met a Fury/Demigod named Orkos who helped Kratos break his connection with Ares. Orkos told Kratos to go to Delphi to meet Aletheia. Kratos was encountered by Pollux and Castor who took Aletheia's rule. Aletheia was blind since her eyes were ripped out by the Furies. Kratos used the Amulet of Uroborus to destroy and construct surfaces. When Kratos came to Delos, Orkos gave Kratos an Oath Stone in which Kratos can use a decoy to get out of the Furies' traps. After finishing the Trials of Archimedes, Kratos and Orkos were sent to Aegaeon the Hecatonchires. The Hecatonchires was a titan who broke his oath and became a prison for oath breakers. Kratos escaped from the insect infested prison and killed Megaera. He later killed Tisiphone, her pet Daimon and Alecto who can transform into a sea monster. Before the Furies died, they made their son, Orkos their oath keeper. Kratos regretfully killed Orkos which broke his oath and made him remember the tragedy made on Calliope and Lysandra. He put Orkos' corpse where Calliope and Lysandra's were.

God of War: Chains of Olympus

Kratos did various tasks for the gods for 10 years. One task included that Kratos must help Helios defeat Morpheus, Atlas and Persephone. The death of Persephone led to Atlas carrying the world on his shoulders. Atlas stated that both he and Kratos will meet again.

Kratos' last task from Poseidon was to kill the Hydra. The torment of what he had done to his family still haunted him. He wished for forgiveness and sought out Athena.

Athena and the other gods have become troubled by Ares and she offers Kratos forgiveness if he kills the God of War. Eventually, Kratos finds Pandora's Box and with it's power he is able to kill a god. However, the Box contained the evils of the Great War and infected the other gods. Athena put hope to help Kratos kill Ares. But when he goes to claim his prize, Athena forgives him, but this does not make him forget his past. Kratos attempts suicide, but is saved by Athena. Without Ares, the gods have decided that Kratos will be the new God of War.

God of War: Ghost of Sparta

Before Kratos actually became a god, he had to find Deimos. Kratos sunk Atlantis which made Poseidon upset. Kratos found Deimos at the Domain of Death. Kratos and Deimos killed the owner of the land named Thanatos. Deimos later died. He was dug to his grave by the Grave Digger (Zeus). The Grave Digger said "Only one remains". Kratos is now a God of War.

As a god, Kratos assists the Spartan army and does not associate himself with the other gods, which angers them. Finally, while trying to destroy Rhodes, Zeus intervenes. Zeus gives life to the Colossus of Rhodes and tricks Kratos, telling him how to defeat the giant. Kratos puts all his godly energy in the Blade of Olympus, but it is taken from him by Zeus, who kills him. The titan Gaia helps Kratos escape from Hades and tells him to find the Fates to change his destiny. When he finds them, they cannot do as Gaia says and Kratos slays them. Using the Loom of Fate, Kratos travels back to when Zeus killed him. He battles with the king of the gods and defeats him, but Athena intervenes, at the cost of her own life.

Athena tells Kratos that Zeus was trying to break the cycle of the son killing the father and that Kratos is the son of Zeus. This does not deter Kratos from seeking his revenge on Zeus. He uses the Loom once more to go further back in time to the Great War between the Titans and the Olympians. He rallies the Titans to fight with him in the future and kill the gods of Olympus.

Kratos and his Titan allies were attacked by the Gods. After brutally killing Poseidon, he confronts Zeus but is blasted from Mt. Olympus along with Gaia. With his grip slipping, Gaia refuses to help Kratos, stating he to be nothing more than a pawn to serve the Titans, having now brought them to fight Zeus, he outlived his usefulness.

Kratos fell into Hades Realm, where he is greeted by Athena, who had become some sort of Angel and agrees to help Kratos, so can mankind be freed from Zeus's grasp, and told he should extinguish Olympus' source of power, the Flame of Olympus. In the Underworld, Kratos meets Hephaestus, the God of Smith, who warn him the Flame of Olympus is deadly to all who touches it. Kratos also kill Hades and finds the tombs of Ares and Persephone. He learn Hephaestus had created Pandora, a child-like construct, who is the key to extinguish the Flame of Olympus and had been hidden by Zeus, so Kratos cannot find her.

He resumes his quest back to Olympia, killing Hermes and taking his boots; curb stomp Hercules to death, snaps Hera's neck with his bare hands after she called Pandora a whore. Back above, he finds Gaia, now loosing against the Gods and ask his help again, but having been already betrayed by the Titans he refuses and sever her hand. Kratos also find the goddess of love

Aphrodite and makes love with her, much to Hephaestus's dismay, but when he learn Kratos intend to sacrifice Pandora to the Flame of Olympus so he can retrieve the Pandora Box, Hephaestus send him to the Underworld to retrieve the Omphalus Stone inside their grandfather's belly, the Titan Cronus.

Cronus and Kratos fight, and after Cronus made the foolish mistake of swallowing Kratos like he did with his sons, Kratos cut his way from the Titan, finding the Stone and use the Blade of Olympus to finish off Cronus. Hephaestus make a new weapon with the Stone an give to Kratos, but he tried to kill him so he cannot reach Pandora, and Kratos kill him in turn.

He finds Pandora, but Kratos grew fond of her because he reminds her of his daughter and is at first, unwilling to let her sacrifice herself, as he realized that if he lost Pandora he would be throwing away another loved one because of the manifestation of his daughter in Pandora's form. But Zeus appears and they end up fighting, but Pandora tries to jump in the flame only to Kratos hold her, but Zeus kept reminding him of "do not fail her like you fail with your family" making Kratos exploding in anger and attacking Zeus in a overwhelming rage, but letting Pandora fell into the Flame.

After he open the Pandora's Box and find it empty, the guilt of a loved one sacrifice in vain lies heavily in his shoulder and he pursues Zeus into a last stand, which is interrupted by Gaia herself, having survived the attempt against her, Zeus and Kratos fell into her heart and after one last battle, Kratos kills both Zeus and Gaia by stabbing them with the Blade of Olympus in the heart.

After removing the Blade from Zeus' chest, he emerges a spirit moved by his overwhelming hatred for Kratos and imprisons him in his own mind. However Pandora appear to him and remind him of hope and her sacrifice. Kratos manage to get hold in to himself, overwhelm Zeus and beat the tar out of him to death.

However, after the gods have been killed, calamity after another befell over mankind, leaving a calamitous world behind, and Athena appear to Kratos and demands she return her power to him. She explain the Box was not empty, after Kratos opened it to fight Ares, all the evils rested inside the Box sought out the strongest and end up corrupting the Gods, but the Hope, the last remnant was inside the box sought Kratos, and he still has the power of Hope inside him. Rather than let himself be manipulated by another, he impale himself with the Blade of Olympus and release the power of Hope into the world. After he falls dead in the ground, in a post-credit scene, a trail of blood into the sea is seen, indicating he might still be alive...
Superhero Class